Home » Daily » Memory » Brain Food: What to Eat to Protect Your Memory 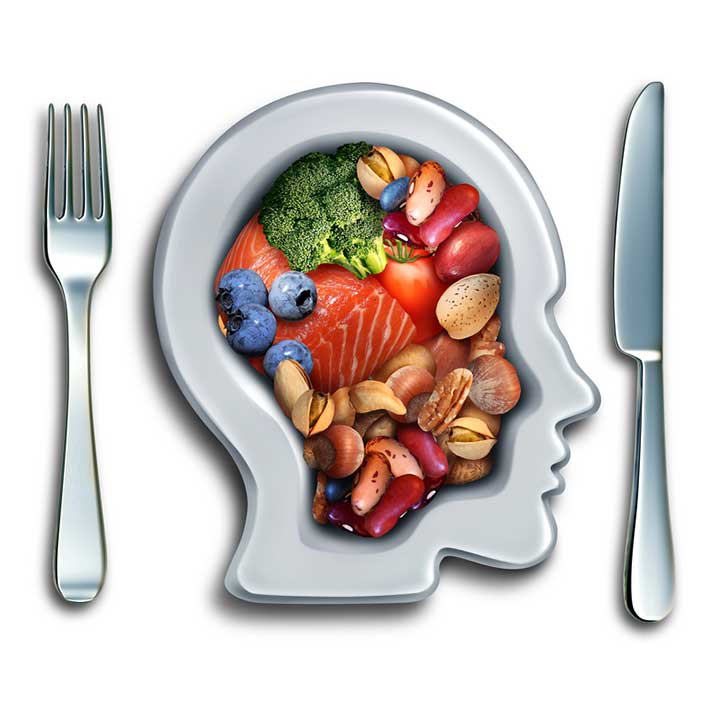 When it comes to memory power and concentration, selecting the right brain food is essential. Certain foods have been shown to do a good job of protecting memory and cognition, while it’s equally as important to avoid others.

Although diet isn’t the only factor that affects your brain’s prowess, it’s an important one, so let’s examine some of the smartest foods for your noggin—and then review the types of food you should avoid.

Is the right fat where it’s at when it comes to brain food? Unsaturated fats may have the opposite effect of saturated and trans fats on your heart and brain; they may help protect and preserve your memory. Diets that contain plenty of healthy, unsaturated fats have been linked to lower rates of dementia and mild cognitive impairment. Unsaturated fats are considered healthier fats.

These foods support brain growth and development. Vegetable oils, nuts, and seeds, although they’re considered brain food, should be consumed in moderation because they’re high in calories.

Fuel with Fruits and Vegetables

You can support optimum cognitive function and improve the health of your blood vessels with the help of nutrient-dense, antioxidant-rich vegetables and fruits. Dietary patterns that contain plenty of whole or minimally processed fruits and vegetables are linked with a lower stroke risk. You are more likely to experience impaired memory and cognition if you have a stroke.

The following nutrients have been linked with better brain health. They come from smart food choices that provide us with the energy needed to focus and learn while helping to protect against brain diseases.

• Alpha lipoic acid is an antioxidant that has been shown to improve memory deficits and reduce cognitive decline in some studies. It is found in vegetables such as spinach, broccoli, tomatoes, green peas, and Brussels sprouts along with potatoes.

• Vitamin E is another antioxidant that has been linked to improved memory and cognitive performance. Good sources of vitamin E include green, leafy vegetables such as kale, spinach, Swiss chard, and mustard and turnip greens, as well as asparagus, almonds, and sunflower seeds.

• Vitamin B6, vitamin B12, and folate are linked with lower homocysteine levels, which are associated with a lower risk of cognitive decline and Alzheimer’s disease. Legumes (beans, peas, and lentils), nuts, whole wheat, quinoa, brown and wild rice, and millet are good sources of these B vitamins.

If you eat plenty of plant foods and fish and limit your intake of saturated and trans fats and added sugars, you will support your brain’s abilities to remember, concentrate, make decisions, and engage in the many functions needed for daily living.

And what about foods to avoid? Let’s start with trans fats.

Foods that contain industrially produced trans fats are known to raise LDL (“bad”) cholesterol levels and lower HDL (“good”) cholesterol levels. Processed foods made with partially hydrogenated oils (PHOs) contain trans fat. PHOs are produced in an industrial setting that adds hydrogen molecules to liquid vegetable oil. The process makes them solid at room temperature and extends the shelf life of the products in which they are used.

The U.S. Food & Drug Administration (FDA) has determined that PHOs are not “generally recognized as safe” and has mandated that food manufacturers remove all PHOs from food products. However, some food products currently on store shelves do contain PHOs, so always read ingredient lists before purchasing. Foods most likely to contain PHOs include stick margarines, shortening, pre-made frostings, frozen pies and pie crusts, biscuit and pancake mixes, non-dairy creamers, microwave popcorn, doughnuts, and fast foods.

Saturated fats are most often found in animal-sourced foods, including beef, pork, processed meats, tallow, lard, cream, butter, whole milk, and whole-milk products, such as full-fat ice cream, cheese, and yogurt. Most plant-based foods are free of saturated fat with the exception of palm, palm kernel, and coconut oils. Dietary patterns that are high in saturated fat are known to raise blood levels of LDL cholesterol. Research shows that consuming foods high in saturated fat is linked to lower performance on thinking and memory tests.

LDL cholesterol is commonly referred to as “bad” cholesterol because it is the type that is most likely to contribute to plaque buildup in your arteries. Plaque buildup can cause hardening and narrowing of the arteries, which restricts blood flow and oxygen delivery to your brain, heart, and other organs. When your brain doesn’t receive enough oxygen, it cannot function at its best. Links to Alzheimer’s provide evidence of an association between saturated and trans bad fats, raised LDL levels, and poorer brain function.

A dietary pattern common in the U.S., often referred to as the “Western” diet, is high in added sugar, as well as processed foods, red and processed meats, and other foods that have been linked to a number of chronic diseases. Diets high in refined sugar are linked to impaired memory. It’s a notable issue for adults as well as children; diets that are high in simple sugars and other refined carbohydrates have been clearly associated with lower cognitive functioning in children.

For related reading on brain food and related topics, please visit these posts:

Added sugars include the sweeteners found in candy bars, desserts, soft drinks, and fruit drinks; they do not include the natural sugars found in fruits and milk. Other food products that may be high in added sugar include ready-to eat breakfast cereals, condiments (especially ketchup and barbeque sauces), salad dressings, sports and energy drinks, baked beans, and pasta sauces.

Research has shown that the risk of mild cognitive impairment and dementia is increased in older adults who get most of their calories from refined carbohydrates, rather than from protein and healthy fat. In fact, Alzheimer’s is being referred to by some health and nutrition experts as “type 3 diabetes.” To protect the health of your brain, avoid foods made with added sugar.