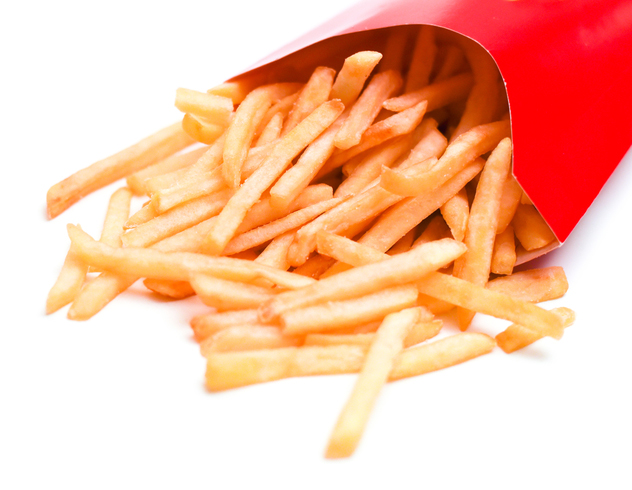 Deep-fried foods can cause depression symptoms, so... stay away!

According to the World Health Organization, depression affects more than 350 million people of all ages and often leads to such diseases such as heart disease, high cholesterol, obesity, diabetes, or Alzheimer’s. Could what you eat be the first step in this vicious downward spiral? Sometimes, people mistake depression symptoms and anxiety for just being “down.” While we all endure low periods in life, especially during personal struggles, depression is much more serious. Depression is not simply “having a bad day” and it is not something that’ll just “go away.”

The truth is that depression is a chronic physical disorder just like diabetes, heart disease, or other chronic illnesses. Ignoring depression is like ignoring a small fire in your living room. Soon enough, that small fire will lead to the whole house burning down. If you think you have depression, chances are you do—and that means it’s time to get help.

Diet and Depression Symptoms: Could Food Be Affecting Your Mood?

What if one of the best ways you could beat the blues simply involved changing your eating patterns? I know what you’re thinking: That sounds too easy. In fact, I’ve heard many people (including doctors) claim food has nothing to do with mood. To those who say that, a few questions are in order: What about alcohol? Does it impact people’s mood and behavior? Or, what about the way you feel a couple of hours after that huge Thanksgiving meal?

The reality is that food plays a huge role in how we think, act and feel. And if you suffer from depression, food could be one of the primary root causes of your emotional discord. Research is revealing that food choices can play havoc on the brain and can lead to a vicious cycle of anxiety, angst, mood swings, brain fog and other depression symptoms. Here are two reasons why:

Eating foods high in sugar and carbohydrates—doughnuts, cereal, candy, hot dogs, soda—cause a temporary increase in serotonin, the feel-good brain chemical that eases your tension, calms your mood, and makes you happier. Since eating these foods has an anti-anxiety effect (albeit a short-lasting one), these often become “comfort foods.”

Think about it: When you’re feeling depressed or stressed out, do you often crave breads or a chocolate fix to help you feel better? While these foods indeed provide a temporary euphoric feeling, on the flip side, sweets and carbs also induce a quick and shocking crash; that is, soon after serotonin is temporarily increased, it suddenly drops. This dramatic lowering of serotonin leads to feelings of sleepiness, hostility, anxiety and depression.

Remember the anti-narcotics commercials that said, “This is your brain on drugs…”? Most people would never consider that eating French fries or onion rings would produce some of the same effects as smoking marijuana. But according to new research, this is not so far-fetched. A study conducted by the National Institutes of Health revealed, “The body uses a major constituent in most vegetable oils to make its own versions of the psychoactive ingredient in marijuana. Called endocannabinoids, these natural compounds play a role in heightening appetite. So overproducing them unnecessarily boosts hunger, similarly to how pot triggers the munchies.

If what happens in people mirrors what happens in animals, then the prevalence of soybean oil, corn oil, and other polyunsaturated vegetable oils in today’s Western diet means your body is dumping out a lot of these marijuana-like molecules into your brain,” explains Hibbeln, a nutritional neuroscientist. “You’re chronically a little bit stoned.”[1] 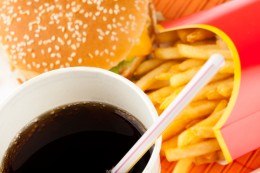 The bottom line: if you often feel “foggy-brained,” have difficulty concentrating, feel tired all the time, or experience intense periods of food cravings, your regular consumption of  foods deep fried in vegetable oils may be to blame.

Aside from carbohydrates, sugars and trans-fats, other food types can impact your emotional health—either negatively or positively.

Here’s the take-away message regarding food and depression symptoms: You can try all the natural remedies in the world—vitamins, supplements, teas, acupuncture, and more. But if you do not change your diet, you will likely find temporary relief from your depression symptoms.

To achieve long-lasting results, you have to “dig in” to a healthy lifestyle. Eating a combination of fruits, vegetables, grass-fed meats, and healthy fats can contribute to long-term relief. But continuing down the same spiral of stressful indulgences—chocolates, sodas, chips, hamburgers, and fries—will likely keep you feeling emotionally wrecked. As the saying goes, “Insanity is doing the same thing over and over again and expecting different results.”