Home » Daily » Nutrition » Benefits of Green Tea: 6 Reasons to Brew Some While You’re Reading This 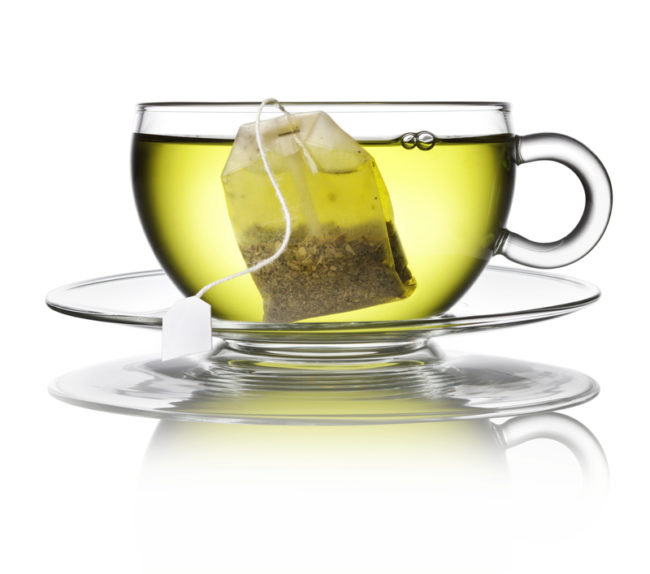 Make it a regular beverage: The benefits of green tea range from weight loss to lower cholesterol to stress-buster.

Tea is hot—figuratively and (sometimes) literally. It’s the second-most consumed beverage in the world, following only water. In the United States, sales of tea reached $11.5 billion in 2015. Green tea is particularly trendy, and with good reason. The benefits of green tea have been well documented and reported in recent years.

How does green tea help us? It’s known for a wide variety of useful effects on our minds and bodies. In July 2017, for example, the Federation of American Societies for Experimental Biology (FASEB) reported on a new study involving mice that suggested that Epigallocatechin-3-gallate, better known as EGCG, “could alleviate high-fat and high-fructose-induced insulin resistance and cognitive impairment.” EGCG is the most abundant catechin—a subcategory of flavonoids (themselves a subcategory of polyphenols)—and the most biologically active component in green tea.

(The other three catechins in green tea, by the way, are called epicatechin, epigallocatechin, and epicatechin-3-gallate. But it’s the EGCG that’s the most important, having proven to be responsible for most of the health benefits of green tea.)

How important were FASEB’s findings? Science Daily put it like this: “Previous research pointed to the potential of EGCG to treat a variety of human diseases, yet until now, ECGC’s impact on insulin resistance and cognitive deficits triggered in the brain by a Western diet remained unclear.”

All About Green Tea: Benefits Range from Antioxidant Help to Disease Prevention

Green tea, which is grown in more than 30 nations around the globe, has a long history of medicinal benefits.

“The ancient habit of drinking green tea may be a more acceptable alternative to medicine when it comes to combating obesity, insulin resistance, and memory impairment,” according to Xuebo Liu, PhD, a researcher at the College of Food Science and Engineering, Northwest A & F University, in Yangling, China.

How ancient is tea-drinking? The book Herbal Medicine: Biomolecular and Clinical Aspects provides this quick tour of tea history: “The second emperor of China, Shen Nung, is believed to have discovered tea when the leaf of the plant Camellia sinensis blew into his cup of hot water (2737 BCE). The first European to encounter tea and write about it was the Portuguese Jesuit missionary Father Jasper de Cruz in 1560. Around 1650, the Dutch introduced several teas and tea traditions to New Amsterdam (which later became New York).

“The first tea sold as a health beverage was in London, England, at Garway’s Coffee House in 1657,” the authors of Herbal Medicine continue. “In 1826, John Horniman introduced the first retail tea in sealed, lead-lined packages. In 1870, Twinings of England began to blend tea for uniformity. The Englishman Richard Blechynden created iced tea during a heat wave at the St. Louis World Fair in 1904, and the New York tea importer Thomas Sullivan inadvertently invented tea bags in 1908 when he sent tea to clients in small silk bags and they mistakenly steeped the whole bags. Finally, the world’s first instant tea was introduced in 1953.”

So What Are the Benefits of Green Tea? Let’s Count the Ways

Well before the 2017 FASEB study cited above, most recent study, researchers have been lauding the benefits of green tea. Consider the ways it can make an impact on our health.

For more information on tea and your health, visit these posts:

For information on the tea industry, visit these sites: