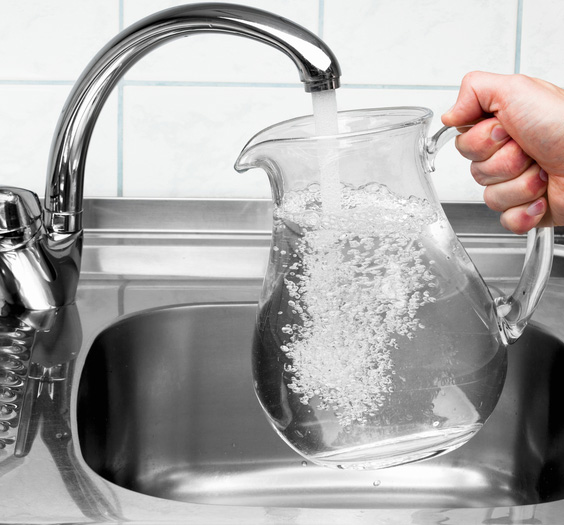 Is there a significant amount of lead in water we get from tap water? The answer may be somewhat surprising.

High lead levels found in the Flint, Mich., water supply a few years ago heightened national concerns about public water safety. In 2017, the Reuters news agency reported that children in Fresno, Calif., had as high or higher lead levels than children in Flint, and that tainted drinking water could be a contributing factor. And in early 2018, the peer-reviewed British medical journal The Lancet published a study that found that blood lead levels previously thought to be safe in adults are now a risk factor for cardiovascular disease, heart attacks, and early death. These reports can, understandably, make you fearful about drinking lead in water coming out of your faucet.

Fortunately, any significant exposure to lead from your tap water is highly unlikely. Here’s why.

Hilary Arnold Godwin, PhD, is a professor in the Department of Environmental Health Sciences and Associate Dean at the UCLA Fielding School of Public Health. She says that while lead can enter the body through tap water, in general it’s not typically the way people get significant exposure to lead. While it happened in Flint, the tragedy wasn’t due to lack of water safety regulations; it was due to public officials’ gross negligence.

“In general, we have an amazing system of tap water in the United States,” says Dr. Godwin. “The municipal districts treat the water at the plant to meet high Federal guidelines that have very strict limits on lead. There are also very stringent reporting, prevention, testing, and remediation requirements.” (Learn more about lead and water safety from the EPA by clicking here.)

Lead in Water: The Flint Tragedy

In Flint, water left the plant in decent condition (though not great, says Dr. Godwin), but became contaminated in delivery lines by a new water source (the Flint River). The river water corroded the pipes going into people’s home, raising lead levels astronomically.

In one Flint home, lead levels were reported at 13,200 parts per billion; the EPA requires immediate action when lead levels are at 15 parts per billion. Federal law also requires municipalities to have a corrosive control plan. Had it been followed, the crisis could have been averted, according to reports from Virginia Polytechnic Institute investigators published in Scientific American. The real problem was that Flint officials ignored the law.

While not perfect, Dr. Godwin says, the municipal water system is by and large safe. However, if a home is dependent on well water (like some in Fresno), owners of domestic wells must test and treat their own water (annual testing is recommended). Well water is not regulated by the State of California, and is not subject by law to meet the same standards.

Health Hazards of Lead in Water

Lead toxicity depends upon the person exposed and how much they’ve been exposed to. There is no blood level at which it is considered safe in children, making it especially dangerous in infants who are still developing.

With older age, however, comes longer-term exposure. Lead accumulates in the body and is stored in the bones, where it can hibernate for decades. Calcium deficiency and osteoporosis break down bone and can release lead stores into the blood stream, unleashing its damaging effects later in life.

In a groundbreaking 2018 study reported in The Lancet, researchers found that low-level lead exposure (between 1 and 5 micrograms of lead per deciliter of blood) increases the risk of premature death, especially from cardiovascular disease. Researchers estimated that 28.7 percent of premature cardiovascular disease deaths could be attributable to lead exposure, including a high proportion of ischemic heart disease deaths (lead was linked to 37.4 percent of all IHD deaths).

The study used data from the Third National Health and Nutrition Examination Survey (NHANES-III) for 14,289 people in the United States aged 20 years or older between 1988 and 1994, and the end of 2011.

“Estimating the contribution of low-level lead exposure is essential to understanding trends in cardiovascular disease mortality and developing comprehensive strategies to prevent cardiovascular disease,” according to the study’s lead author, Professor Bruce Lanphear of Simon Fraser University in Canada,

Dr. Godwin concurs that the study sheds light on what needs to be done on public policy and public health levels to protect all citizens. And there are proactive steps that all individuals can take to better safeguard their own health, too.

Reducing Your Exposure to Lead in Water, Paint, and Other Sources

Lead can also leach into water from brass or chrome-plated faucets and fixtures with lead solder. Homes built before 1986 are more likely to have these problems. Lead-based paints were banned from use after 1978, but homes built prior to that time likely have lead-based paint.

Rehabbing older homes without safety precautions could expose rehabbers to lead particles. In 2017, the U.S. Food & Drug Administration confirmed reports that some traditional ceramic pottery (in particular earthenware, a porous form of clay) made in Mexico and labeled “lead-free” do in fact contain lead and exceed the “leachable” lead limits—meaning that lead could get into food/drink that makes contact with the pottery.

What About Long-Ago Exposure to Lead?

You can avoid some of the lead hazards noted above, but what can you do if your occupation or environment exposed you to lead long ago?

“If you were exposed decades ago, the lead that is stored in your bones can be mobilized, for example, if you’re calcium-deficient,” Dr. Godwin explains. “This is an indicator that you should be doing all you can to follow healthy bone practices that help prevent calcium deficiency, and also follow a heart-healthy lifestyle to better protect your heart.”

Being active, reducing stress, heart-healthy eating, and not smoking are good for your heart, bones, and overall health. As for water, if you’re worried, you can get a relatively inexpensive test that measures particulates.

Also, inexpensive home-activated carbon with ion exchange water filters (such as Brita) used in pitchers or attached to the tap can work very well to remove/reduce lead, mercury, cadmium, and other particulates. Such products also remove chlorine and thus improve the taste of water.

Reverse osmosis systems also work well. They remove more particles and arsenic (Brita-type filters don’t), but are more expensive. Dr. Godwin uses a simple tap-based filter in her kitchen and says her water tastes great. The key is to your change the filter regularly.

As for all the bottled water out there? “A lot of bottled water,” according to research conducted by a non-profit journalism organization called Orb Media, may contain tiny bits of plastic, known as microplastics.

“The huge irony is that the regulations for bottled water are not as strict as that for tap water,” says Dr. Godwin. “And there are potential problems of plastic leaching into water. Also, bottled water is not sustainable because you’re paying to transport it in trucks, which is energy intensive, and there’s no reason to believe it’s better for your health.”