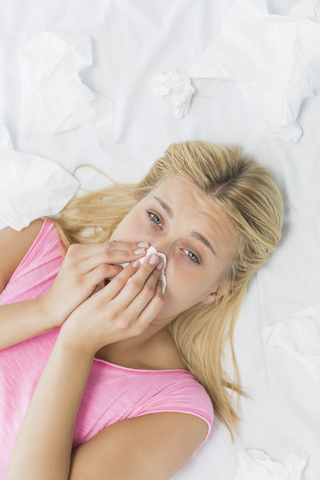 Before you come down with that days-long virus, take the cold and flu prevention measures outlined in our post.

Every year, millions of Americans are hit by cold, flu, and other respiratory infections. While the common cold will rarely cause serious complications, the flu and other infections—such as Legionnaire’s, pneumococcus, and mycoplasma—can lead to severe and potentially life-threatening complications, especially in the young, the elderly, and the chronically sick. So what cold and flu prevention measures can you take to protect yourself from the inevitable round of infections this year?

The infections that cause respiratory issues are usually spread by one of the following methods:

It is thought that some viruses that cause colds can survive on indoor, hard surfaces for up to a week, but their ability to cause infection declines rapidly with time. On handkerchiefs or towels, they can potentially survive up to four hours; on skin, they can survive for up to an hour.

Prevention Is Better Than Cure

This all sounds rather bleak, but don’t despair. There are plenty of actions you can take to reduce your risk of the common cold, flu, and other respiratory infections. Physicians at Weill Cornell Medical College recommend the following steps.

1. Consider getting yourself vaccinated against flu and pneumococcal pneumonia in the fall or early winter.

A vaccination is especially important if you’re in these risk groups:

Be warned, though, that these vaccines are by no means a guarantee. Dr. Andrew Pavia of the University of Utah School of Medicine said of the flu vaccine in 2015, “It’s a mediocre vaccine, it’s 65 percent efficacious in an average year, and it doesn’t work as well in children under age 2 years or in the elderly as it does in healthier patients.”

This will speed your recovery and reduce the risk of spreading the flu, cold, and other infections.

3. Cover your mouth and nose, especially when you cough or sneeze.

It’s amazing how far those droplets can spread. Sneezing into your elbow is the best approach. Sneezing into the hand or a handkerchief is not effective for reducing spread.

Wash your hands often with soap and water or alcohol-based hand cleaners, especially after you cough or sneeze.

Infection can enter your mucous membranes that way.

6. Avoid close contact (6 feet or less) as much as possible with people who are sick.

No hugs, kisses, or handshakes with an infected individual.

7. Antiviral medication can be used as a preventative measure in some situations.

With at-risk people who have been in contact with a confirmed case within the past 36 hours, for example, or when there is an outbreak in a nursing home.

The Key to Common Cold and Flu Prevention: Boost Your Immune System

It’s highly likely that you will come into contact with respiratory infections in the coming months, but if you have a strong immune system, you may not get ill, or if you do, you’ll fight it off quickly. Boosting the immune system is particularly important for people who are elderly or chronically ill.

One of the possible reasons the flu is so common in January is that people naturally begin to overindulge in unhealthy food and neglect their health over the winter holiday period. So in picking up on our list of common cold and flu prevention tips, make sure you give your body the following:

A diet rich in fresh vegetables and fruits reduces harmful free radicals and inflammation and boosts the immune system. Diets high in processed foods, sugar, and saturated fats do the opposite, meaning that when the flu and other infections are going around, you’re more likely to catch an infection and get ill. The occasional overindulgence is okay, but make sure you’re getting plenty of fruits and vegetables to counteract some of the “goodies.” One fascinating study showed that drinking freshly squeezed orange juice after a fast-food meal counteracted the harmful inflammatory changes.

Taking regular probiotic supplements may boost immunity to flu and other respiratory infections. A 2015 review by the Cochrane Collaboration reported, “Probiotics were found to be better than placebo in reducing the number of participants experiencing episodes of acute URTI (upper respiratory tract infection) by about 47 percent and the duration of an episode of acute URTI by about 1.89 days. Probiotics may slightly reduce antibiotic use and cold-related school absence.”

Many people develop a zinc deficiency as they get older, and this impairs immune function and increases the risk for acquiring infection. Zinc is found in many foods, including seafood, beef, wheat germ, spinach, pumpkin seeds, cashews, cocoa powder, chickpeas, and mushrooms. Taking a zinc supplement may be of benefit if you have been exposed to a common cold or flu or other respiratory infection. The National Center for Complementary and Integrative Health (NCCIH) reports that “Zinc taken orally (by mouth) may help to treat colds, but it can cause side effects and interact with medicines…. Oral zinc helps to reduce the length of colds when taken within 24 hours after symptoms start.” The use of intranasal zinc is discouraged. (See also our post Zinc: Does It Really Fight Off a Cold?)

Experts at the U.S. National Library of Medicine explain that exercise may boost immunity by:

However, the National Library of Medicine warns, “Heavy, long-term exercise (such as marathon running and intense gym training) could actually cause harm.”

A 2017 study from University of Washington Health Sciences found that lack of sleep has a detrimental effect on immune health. Aim to get seven or eight hours of restful sleep each night if you want a fighting chance against common cold and flu infection.

14. The benefit of not smoking.

If you’re a smoker, you’ve heard this many times before: Smoking is bad for your health. Smoking increases your risk of catching, getting complications, and dying from the flu and other respiratory infections. (For more, see our posts How to Quit Smoking: 6 Steps to Success and How to Prevent Smoking Diseases—and Add Years to Your Life.

Many alternative practitioners and their patients swear by a whole host of therapies, but there’s a lack of strong evidence that they are effective in preventing the common cold, flu, and other respiratory infections. This does not mean that these don’t work—just that the evidence is weak. Therapies include ginseng, Chinese herbs, ginger, garlic, Echinacea, elderberry, green tea, vitamin C, and vitamin D. If you want to try alternative therapies, check that there are no interactions with other medications you are taking.