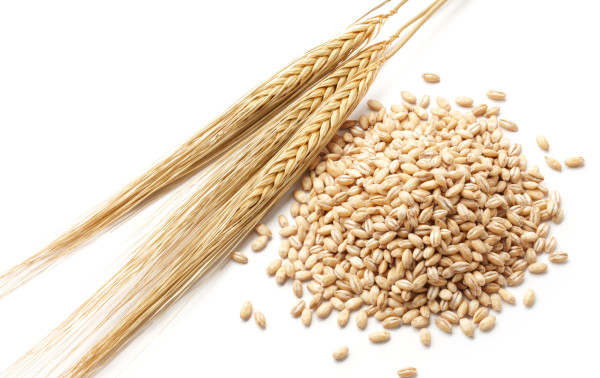 Get those whole grains in your diet; they're a prime source of energy. Pictured: barley and barley stalks.

Whole grains provide unrefined carbohydrates (carbs), a primary source of energy in a balanced diet plan. Carbs have been the target of much criticism, and low-carb diets have gained many followers.

It’s true that diets high in refined carbs have been linked with higher risks of many diseases, but the opposite is true of diets high in unrefined carbs. That’s why it’s important to choose whole grains whenever possible.

Whole grains provide your body with a slowly released, steady supply of energy, and they are rich in a multitude of essential vitamins and minerals. In addition, whole grains contain a number of important types of fiber. Hundreds of studies show that consuming whole grains offers many health rewards, including reduced risks of stroke, type 2 diabetes, heart disease, obesity, and colorectal cancer.

An intact grain kernel consists of the bran, endosperm, and germ; this is a whole grain. When grains go through the milling process, the bran and germ are removed. The flour made from the remaining endosperm, refined flour, is a primary ingredient in many commercially prepared foods. The typical Western diet is filled with foods made with refined grains.

Studies suggest that eating foods made primarily with refined grains may contribute to metabolic and cardiovascular disease risks, including heart disease and type 2 diabetes. The Dietary Guidelines for Americans recommend making at least half of your grain servings whole grains.

While all whole grains are nutrient-rich, the following whole grains earn top marks for their exceptional nutrition profiles.

Oats. Oats contain fiber and protein, along with iron, thiamin, manganese, and magnesium. Oats also contain phytochemicals that have antioxidant and an-ti-inflammatory effects. Oats are probably best known for their power to reduce “bad” LDL cholesterol levels, which helps lower the risk of heart disease. In addition, oats have been found to increase satiety (fullness after eating), lower blood pressure, promote regular bowel movements, and reduce the risk of type 2 diabetes

Most people think of oats as a healthy breakfast staple, but oats can be included in side dishes, stuffing, casseroles, homemade snack bars, and baked goods.

Quinoa. Quinoa is a tiny whole grain that provides a variety of key nutrients. Quinoa nutrition facts include four grams of high-quality protein, as well as fiber, B vitamins, potassium, magnesium, iron, and calcium—all for 111 calories per one-half cup of cooked quinoa.

Some research points to quinoa’s potential benefits in protecting against diabetes and increasing satiety. And, quinoa is a gluten-free grain, making it a suitable alternative for people who must avoid gluten because of celiac disease or gluten sensitivity.

Wheat. Wheat has been saddled with a bad reputation due to the rise in aware-ness of the conditions celiac disease and gluten sensitivity. People with these conditions must eliminate wheat, which contains gluten, from their diets. This has led some people to erroneously believe that there is something inherently unhealthy about wheat.

In fact, the biggest health concern regarding wheat is that most wheat eaten by Americans is in the form of refined flour, in products such as breads, rolls, pasta, crackers, pastries, and cookies. This doesn’t call for eliminating wheat from your diet (unless you have celiac disease or gluten sensitivity), but it does emphasize the importance of ensuring that most of the wheat-based foods you select are made from whole wheat.

Wheat is rich in many nutrients, including fiber, protein, iron, thiamin, niacin, magnesium, zinc, and selenium—nutrients that you would miss out on if you were following a wheat-free, low-carb diet.

Barley. Whole-grain forms of barley include “hulled barley,” which has had the tight-fitting, inedible hull removed in a process that causes minimal bran loss, and “hulless barley,” which is a different variety of barley that grows without a tight hull.

Hulled barley provides eight grams of fiber per serving (one-quarter cup dry; about one-half cup cooked), which is higher than most other whole grains. It also contains protein and several vitamins and minerals. Hulled barley’s documented health benefits include reduced blood pressure, blood glucose, and LDL cholesterol levels. Eating barley also has been shown to increase satiety, which can help prevent weight gain. Foods high in fiber, such as barley and many other whole grains, break down more slowly than refined grains, so your stomach doesn’t empty as quickly, and it takes longer for the feeling of hunger to return.

Rice. Once the inedible hull is removed from a rice kernel, what remains is brown rice, which is a whole grain. If the rice is milled further and the bran and germ are removed, what remains is white, refined rice. Brown long-grain rice has four times the fiber of white long-grain rice, and has a higher mineral, vitamin, and phytochemical con-tent as well.