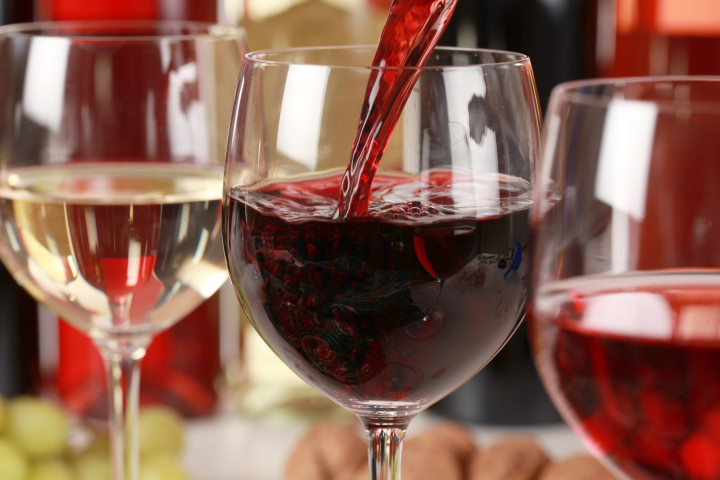 A study conducted in Iceland found that those who consume wine are 43 percent less likely to develop cataracts than those drinking mainly beer.

It’s a logical question to ask if you’re enjoying a glass after a long day at work: Is wine healthy? Research has shown that drinking wine every day—following some important guidelines, of course—may provide adults with multiple health benefits. First, it’s important to keep in mind that the American Heart Association recommends limiting alcohol consumption to an average of one to two drinks per day for men and one drink per day for women. One serving of wine, specifically, is equal to 4 ounces. Consuming beyond the recommended amount can increase your risk of alcoholism, high blood pressure, obesity, stroke, and breast cancer.

Consumed in moderation, though, wine can produce health benefits. So for the following five reasons, you can enjoy that favorite glass of wine with dinner tonight.

If you need to get your cholesterol levels under control, red wine may be able to help. It contains resveratrol, a polyphenol found in grapes that has been shown to lower LDL cholesterol (“bad” cholesterol). Oxidized LDL particles are known to play a key role in the formation of arterial plaques and the development of atherosclerosis.

And that’s not all: Drinking two glasses of red wine per day can also increase “good” HDL cholesterol. In a study of 45 postmenopausal women with high cholesterol, participants saw an 8 percent decrease in LDL cholesterol and a 17 percent increase in HDL cholesterol after drinking 13.5 ounces of red wine a day for six weeks. (Note, however, that that amount of wine is three times more than the American Heart Association’s recommended limit, as cited above.)

2. Red wine can lower your risk of heart disease.

In addition to lowering HDL cholesterol, moderate alcohol consumption of red wine can reduce your heart disease risk by 30 percent by inhibiting blood clotting and decreasing inflammation. The polyphenols in red wine also can help to decrease blood pressure, reduce lipid oxidation, activate cell proteins, and enhance the ability of blood vessels to relax and dilate.

3. Wine has been shown to be safe for—and beneficial to—diabetics.

A recent study measured the blood sugar levels of more than 200 people living with type 2 diabetes. The subjects drank either wine or mineral water daily with a dinner based on the Mediterranean diet. For those who metabolize alcohol slowly, the participants who drank red or white wine saw beneficial effects on blood sugar compared to those who drank mineral water. They also experienced a significant reduction in fasting plasma glucose and an improved measure of insulin resistance.

4. Wine can protect your brain from the effects of Alzheimer’s disease and dementia.

Various studies over the years have shown significant reductions in Alzheimer’s disease, cognitive function, and dementia in those who moderately consume red wine.

For example, a research team at the David Geffen School of Medicine at the University of California in Los Angeles conducted a pilot study with men and women, ages 66 to 82, who had experienced mild cognitive decline for at least six months but who had not been diagnosed with AD or another type of dementia. Half of the participants were given a daily dose of a placebo—an inactive substance, often in the form of a pill, that looks like but isn’t actually medicine. The other half of the study’s participants took a daily dose of freeze-dried grape powder equivalent to one-and-a-half glasses of wine.

After conducting various neurological tests, researchers found that the group that consumed the grape powder experienced no significant decline. In the case of the group taking placebos, the regions of the brain that typically decline when a person experiences the early stages of dementia actually did become less active.

5. Red wine can lower your rate of depression.

While depression has a significant link to heavy alcohol consumption, moderate amounts of red wine have been shown to have the opposite effect. According to a Spanish study, a group of men and women between the ages of 50 and 80 who consumed moderate amounts of red wine had significantly lower rates of depression than those who didn’t drink any alcohol. Again, the positive effects involve resveratrol, which can have an anti-inflammatory effect on the brain.

Is Wine Healthy If It’s Not Red?

We know from medical research about the effects of red wine on our health, but is wine healthy if it’s of another variety? And what about champagne? Worry not—other types of wine also can be good for you. For example, while red wine is still the top choice for heart health, white wine has been shown to have similar effects on cholesterol levels, according to the European Society of Cardiology.

A separate study published in the Annals of Internal Medicines showed the results of a study conducted in Israel during which 224 participants with diabetes were asked to drink either white wine, red wine, or mineral water with dinner every day for two years. Some of the participants in the groups that drank red wine and white wine showed improved glucose control tests.

Rosé wines contain significant amounts of resveratrol, depending on how they’re produced, and champagne and sparkling wine contain high levels of polyphenols that can benefit your heart and brain, though with fewer calories than wine. But if you want to be sure that you’re getting maximum amount of benefits that grapes naturally have to offer, it’s best to stick with red wine.

Don’t like the taste or the possible effects of alcohol? According to the AHA, some polyphenols can also be found in grapes and red grape juice, so consult your doctor to find a suitable alternative.

And, of course, as a reminder not to overdo it, we present these articles: