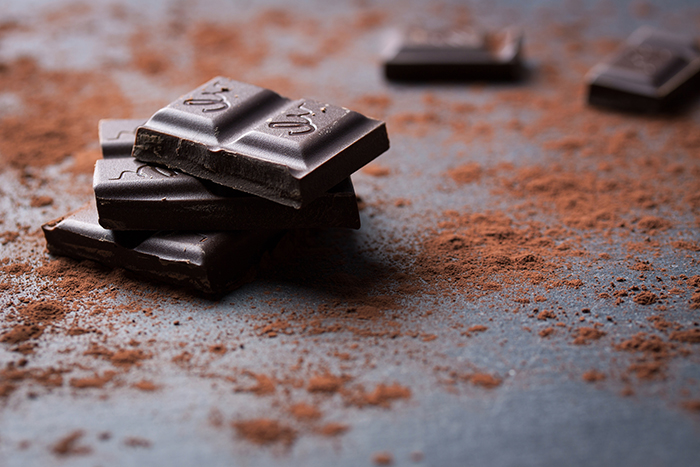 The smell of chocolate can increase theta brain waves, which triggers relaxation.

The world’s love affair with chocolate has only grown over the years. We love it drizzled on ice cream, mixed with warm milk for a delicious beverage, or combined with nuts and caramel for a tempting treat. Chocolate remains one of our favorite indulgences; Americans eat around $18.27 billion worth of chocolate every year—nearly 18 percent of the world’s chocolate confectionary, according to 2015 statistics released by Euromonitor International. And as culinary artists continue to create new ways to experiment with cocoa, dark chocolate has grown in popularity as a rich and intense alternative to milk chocolate.

Along the way, the benefits of dark chocolate have pushed its popularity. You’ve probably seen dark chocolate listed among “must-eat healthy foods” in compilations written by various nutrition experts. Yet depending on how it’s made, dark chocolate also can be high in calories, fat, sugar, and preservatives. So, what’s the real deal? Is dark chocolate healthy?

Why is dark chocolate good for you? It contains a high amount of polyphenols, phytochemicals that have been shown to improve depression, anxiety, and other symptoms of chronic fatigue syndrome. 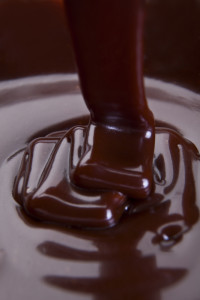 Is dark chocolate healthy? Besides being a mood food (doesn’t the sight of it put you in a good mood?), it can have memory and cardiovascular benefits.

A recent study published in Hypertension showed that performance on cognitive tests significantly improved in elderly individuals with mild cognitive impairment if they consumed a daily cocoa drink containing high levels of flavanols for eight weeks, compared to those who consumed a low-flavanol cocoa drink. (Flavonols are a member of the polyphenol family—compounds found in natural plant food sources that have antioxidant properties.) Because dark chocolate contains more cocoa solids than other types of chocolate, it naturally contains more flavanols.

2. Dark chocolate can boost your memory.

Once again, flavanols get the credit—this time, for their effect on the regions of the brain, especially the hippocampus, that involve learning and memory. They increase blood flow to the brain as well as promote the growth, functioning, and connections of neurons, according to a recent study.

3. Dark chocolate can make you more alert and attentive.

Feeling a bit sluggish? Consider snacking on a square or two of dark chocolate—the darker, the better. A study published in NeuroRegulation found that chocolate containing cacao amounts above 60 percent can have significant stimulatory effects on the brain, which can make you more alert and attentive. (See “Cacao vs. Cocoa” sidebar.) Although researchers aren’t quite sure why cacao has this type of effect on the brain, they do know that it increases occipital beta EEG readings, which corresponds directly with attention and alertness.

What’s the difference between cacao and cocoa? In a nutshell, cacao is the purest form of chocolate we can consume. It’s derived from the bean Theobroma Cacao, which translates to “Food of the Gods.”

Cacao contains more than 300 compounds, including protein, fat, carbohydrates, fiber, iron, zinc, copper, calcium and magnesium, according to a Natural News article. “Magnesium helps to build strong bones and is a muscle relaxant associated with feelings of calmness,” the report adds. “Cacao is also high in sulfur, which helps form strong nails and hair.”

Cocoa refers to the heated form of cacao that we buy in powder form. Although cocoa “may seem inferior to raw cacao,” notes OneGreenPlanet.org, “it’s actually very good for you (and less expensive) if you choose a variety without added sugars and mild fats or oils.”

4. Chocolate acts like a probiotic in your digestive system.

Just like many of us love to eat chocolate, so does the good bacteria living in your gut, according to a study presented to the American Chemical Society. The nutrients found in chocolate, such as polyphenols, antioxidants, and fiber, aren’t easily digestible, but when good bacteria feeds on the fiber, compounds that are smaller, easily absorbable, and non-inflammatory are released. As a result, inflammation in cardiovascular tissue can be reduced.

5. It can improve your cardiovascular health.

While it’s good for your brain and digestive health, dark chocolate can benefit your heart even more. Research shows that the flavonoids naturally found in chocolate can help lower levels of bad LDL cholesterol. Flavonoids can also significantly decrease systolic blood pressure in healthy older adults. Dark chocolate has also been found to improve insulin resistance and endothelial dysfunction, both of which have a positive effect on the heart. In fact, according to a study published in JAMA Internal Medicine, in individuals who suffered a previous heart attack, eating chocolate twice a week compared with never eating chocolate has been shown to lower the risk of death from heart disease by 66 percent.

Is Dark Chocolate Healthy in All Cases?

While dark chocolate can play an important role in your diet, it can be easy to overlook the fact that—depending on the brand—it can be quite high in fat and sugar. Therefore, moderation is key.

And while truffles filled with caramel, ganache, and fruit preserves are delicious, they’re probably going to sabotage your nutritious eating plan. It’s better to pair dark chocolate with nuts, seeds, and dried fruit for a protein-rich afternoon snack.