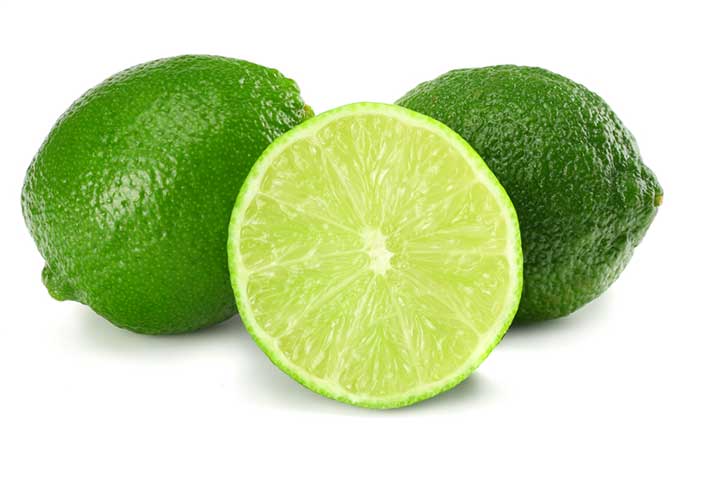 The juice of limes and lemons can be used as a natural remedy for acne because of their astringent and antibacterial properties.

Limes typically don’t receive the same attention year-round as their yellow sibling, the lemon. The summer season is usually when they get the most shine, thanks to their presence in key lime pie, as a mixer for cocktails, and as a finishing touch on grilled meats, fish, and guacamole. But, the health benefits of lime should be celebrated all year long.

Limes likely originated in Indonesia and were taken by Arabian traders to India, the eastern Mediterranean, and Africa around 1000 C.E., according to Britannica.com. They were introduced to western Mediterranean countries in the 12th and 13th centuries, and then introduced to the West Indies by Christopher Columbus in 1493. From there, they were distributed to Mexico and Florida.

1. Limes can benefit your digestive system.

The carbohydrates in limes are mostly made of soluble fiber in the form of pectin. Soluble fiber is known to slow digestion, which keeps your blood sugar stable, and inhibit colon cancer tumor growth. Pectin is also known to promote healthy cholesterol levels, according to LiveStrong.com. And like other citrus fruits, limes contain a nutrient in their peels and oils called d-limonene, which can relieve symptoms of indigestion and GERD. For more information about the benefits of d-limonene and pectin, check out “Improve Your Cholesterol Numbers with Citrus Fruits.”

2. They’re healthy for your heart.

Not only do limes contain pectin, which positively benefits your cholesterol levels, they’re also rich in vitamin C, which is known to reduce the risk of heart disease and stroke. Limes also contain potassium, which, according to the American Heart Association, can help to relieve tension in the walls of your blood vessels and lower blood pressure. For more on potassium, check out “Potassium Benefits Your Heart, Bones, and More.”

As mentioned earlier, the d-limonene found in citrus fruits have multiple health benefits and one of them is cancer prevention. Limes also contain a flavonoid called naringenin, which, according to a recent study, has strong cancer-preventing properties. Citrus pulp and juice also contain high amounts of beta-cryptoxanthin and hesperidin, which are plant compounds found to prevent malignant tumors from forming in rodents.

4. They provide protection against kidney stones.

Research confirms that the citric acid in fruits like lime, lemon, melon, and orange may prevent kidney stones from forming: “Patients with low urinary citrate should be encouraged to increase their consumption of foods high in citric acid, such as lemon and lime juice,” according to information posted by the National Institutes of Health. For more on kidney stone prevention, check out “Natural Remedies for Kidney Stones.”

5. Limes are good for your complexion.

Dermatologists love vitamin C for its positive effect on the production of collagen, a protein that helps prevent skin from wrinkling and is often broken down by exposure to the sun and pollution. For more about collagen, check out “14 Foods That Prevent Wrinkles and Improve Skin.”

The juice of limes and lemons can also be used as a natural remedy for acne because of their astringent and antibacterial properties, which can exfoliate the skin and prevent pores from getting clogged.

6. They protect against anemia.

Anemia is a blood disorder often caused by an iron deficiency. Limes don’t contain much iron, but because they’re high in vitamin C, they can help increase the amount of iron your body is able to absorb.

The vitamin C in limes can boost your immune system, thus reducing the duration of your cold. Studies have shown that limes can have the same effects on influenza as well.

8. They may help relieve asthma symptoms triggered by the common cold.

Vitamin C comes to the rescue again: Studies show that those who consume higher amounts of vitamin C have a lower risk of developing asthma. A study published in Allergy, Asthma & Clinical Immunology found that participants whose asthma attacks were triggered by a respiratory infection were able to decrease the occurrence of an asthma attack by 78 percent by taking one gram of vitamin C a day.

How Do the Benefits of Lime Compare to Lemons?

You may already be taking advantage of the health benefits of lemons, which may lead you to wonder whether it’s time to switch to limes. The answer really depends on your nutritional goals and your preferences in flavor.

As illustrated in the chart below, the nutritional differences between limes and lemons are minimal but worth noting. Lemons are a slightly better source of vitamin C, magnesium, potassium, and folate. However, with limes, you’ll get a tad more calcium, fiber, and phosphorous.

The biggest difference between the two is most likely their flavor profiles. While lemons mostly have a sour, acidic taste, limes commonly have both sweet and bitter flavors mixed in with the sour, depending on the variety.

If you prefer the taste of limes, feel free to consume them the same way you do lemons by adding the juice to homemade dressings and marinades, squeezing some juice into your water, and mixing them into your favorite smoothies and juice blends.

Despite the nutritional similarities between limes and lemons, there are still a few unique benefits of lime that you should know about:

1. Limes can fight against harmful parasites and bacteria.

A study published in the Journal of Ethnopharmacology found that clarified lime juice can prevent the growth of Staphylococcus aureus. Another study discovered that lime juice can enhance parasite clearance in those with uncomplicated malaria.

In a study published in the Journal of Alternative and Complementary Medicine, 58 children with sickle cell anemia were treated with lime during a six-month period and were compared to 55 children who were not given the treatment. The patients who received the lime treatment reported lower rates of recurring bone pain, bouts of fever, and hospital admission rates.

3. They can help keep your arteries healthy.

The jury’s still out on lime’s effect on the arteries of humans, but a recent study found that lime juice and peel increased the plasma antioxidant capacity in rabbits, thus preventing or slowing down the process of atherogenesis. The study also concluded that lime peel was more effective than lime juice. 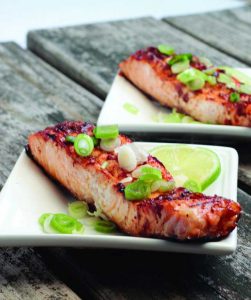 TIP: Farm-raised Atlantic salmon contains more fat than wild salmon. If you use wild salmon (a healthier choice) in this recipe, replace the chicken broth with 1 tablespoon olive oil. Grill the fish just 2 minutes per side. Do not overcook.