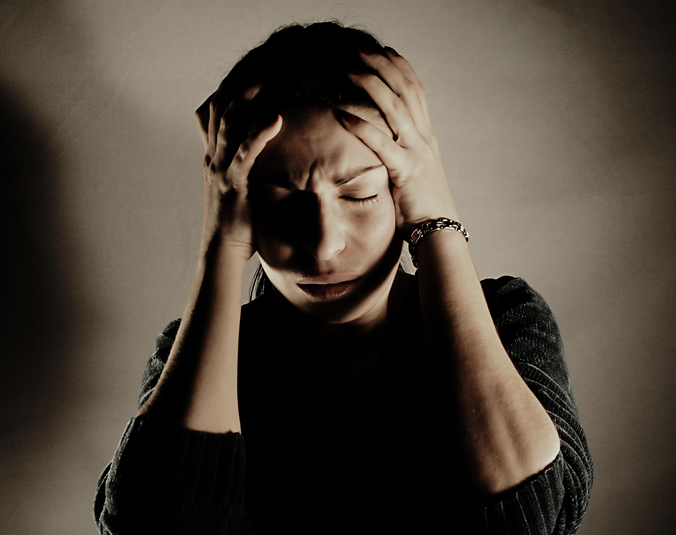 The pain of migraine symptoms can be accompanied visual disturbances.

People who suffer migraine symptoms know they can include an intense pulsing or throbbing ache on the front or side of the head. The pain can last anywhere from four to 72 hours, and it’s severe enough for many sufferers to describe it as feeling like a vise grip is being tightened around their head. Movement—even something as innocuous as sneezing—can worsen the pain.

Along with the pain, about one-third of migraine sufferers experience an “aura” —a visual disturbance that can manifest as flashing lights, zigzag lines across your field of vision, and even a temporary loss of vision. Other frequent migraine symptoms can include nausea, vomiting, sensitivity to light, sensitivity to sound, blurred vision, and lightheadedness.

It also is possible to have what is called “silent migraines” in which you experience an aura or other migraine symptoms but not the headache itself. Regardless of the type of migraine you experience, your first thought is to find quick relief. Below, we discuss not only causes, but treatment options for migraines.

The exact mechanism that underpins migraines is not well understood, although it is known that there may be a genetic link, since 90 percent of migraine sufferers have a family history of the condition.

Recent research suggests that asthma may increase your risk for migraines, as can anxiety and depression, bipolar disorder, sleep disorders such as insomnia, and epilepsy.

Your diet also may be a factor—some people report that their migraines occur after they have eaten chocolate, aged cheese, processed meats, or foods containing monosodium glutamate (commonly used in Chinese food). Alcohol (particularly red wine) also can trigger migraine, as can dehydration.

For women, migraine causes include changes in hormones and hormonal levels during their menstrual cycles. Migraine symptoms affect nearly three times more women than men, and women often experience these headaches for the first time after they first start menstruating. Migraines can vary with a woman’s menstrual cycle and during pregnancy and menopause (they sometimes resolve for good after menopause).

You’ve likely experienced multiple types of headaches in your life. Here are some of the common headaches that hit us; each one links to a related University Health News post.

One important issue connected to migraines is the link between stroke and migraine, especially in people who suffer from migraines with aura. What underpins this link is a mystery, but rest assured that research has not confirmed that migraines actually cause strokes.

Keep in mind also that taking oral contraceptives, being age 45 or younger, and smoking cigarettes also appear to increase the risk of stroke in migraine sufferers.

Other complications that can arise from migraines include rebound headaches if you take too many painkillers to control or prevent your migraines. There also is a slight risk of developing “serotonin syndrome,” which is caused by an excess of the brain chemical serotonin. Some migraine medications—for example, antidepressants and a class of drug called triptans—raise serotonin levels.

If your migraine symptoms are mild, they may respond to over-the-counter (OTC) analgesics like acetaminophen (Tylenol) or nonsteroidal anti-inflammatory drugs (NSAIDs), which include aspirin, ibuprofen (Advil, Motrin), and naproxen (Aleve, Naprosyn). Some OTC migraine medications (such as Excedrin) combine aspirin and acetaminophen with caffeine, which reduces inflammation and helps pain-relieving ingredients work faster. You also may be given anti-nausea medications.

Severe and/or frequent migraines may require prescription migraine medications, such as triptans, which include sumatriptan (Imitrex), and zolmitriptan (Zomig); opioids, which include hydrocodone (Vicodin), and oxycodone (Percocet); and ergots, which include ergotamine (Ergomar), and dihydroergotamine (Migranal). You also may be given anti-nausea drugs, and corticosteroids such as prednisone (Deltasone)—the latter isn’t used often, but can improve the effectiveness of other migraine medications if taken in conjunction with them.

What To Do When You Get a Migraine

When migraine symptoms strike, lie down in a darkened room if you can, preferably with a cool, damp towel or washcloth covering your eyes and forehead. You also might want to try the Cefaly: a battery-operated, headband-like device that is positioned in the center of the forehead, just above the eyes, and transmits a mild electrical current through the skin to stimulate a nerve associated with migraines.

If you suffer from severe migraines several times a month, and your migraines last for 12 hours or more, your doctor may prescribe daily migraine remedies to help to reduce the frequency of the headaches. Drugs that may help prevent migraines include beta-blockers like metoprolol (Lopressor) and propranolol (Inderal); calcium channel blockers like verapamil (Covera), nimodipine (Nimotop), and diltiazem (Cardizem), tricyclic antidepressants, which include amitriptyline (Elavil) and nortriptyline (Pamelor), and anti-convulsants such as topiramate (Topamax).

You also may be able to prevent migraines by keeping a diary in which you note any obvious migraine causes that precede an attack. If an obvious pattern emerges, try to avoid those triggers. Other possible migraine remedies? Many people also report that yoga, meditation, acupuncture, and herbal remedies help to reduce the frequency of their migraines, as well as the severity of their migraine symptoms.