Home » Daily » Pain » Concussion Symptoms: Here’s How to Identify Them 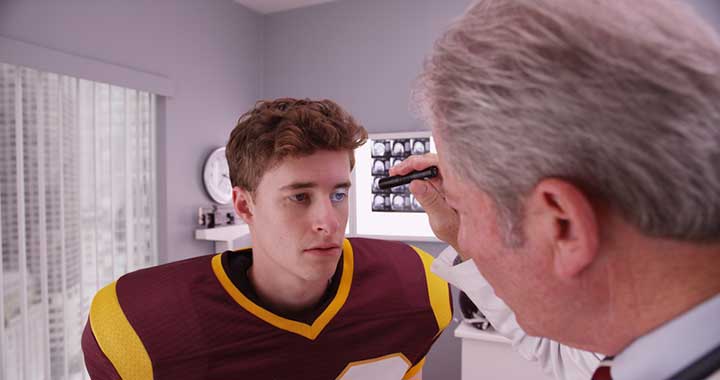 Avoiding sports where concussion is a particular risk—football especially—is a step some parents and teen athletes take in order to avoid concussion symptoms.

A concussion is more than a knock on the head that makes your mind foggy for a while. Research has linked concussion with a greater risk for dementia in older age, while other studies suggest that the concussions many teen athletes sustain while playing sports such as football and ice hockey can result in brain changes that last several months. Unfortunately, concussion symptoms may be so mild that they go undiagnosed. The bottom line? Following a head injury, it’s vital to be aware of signs that might be concussion symptoms so that you can seek medical advice.

What Is a Concussion?

A concussion is categorized as a traumatic brain injury. While concussions are typically the result of a blow to the head, they also can occur if a sudden, sharp jolt causes your brain to shift inside your skull to the extent it crashes against bone. While a concussion may involve loss of consciousness, this isn’t always the case—you can have a concussion without knowing it. It’s also possible for concussion symptoms to develop hours or even days after you were injured.

Concussion symptoms may include:

Who’s at Risk for Concussion Symptoms?

As many as 20 percent of American teens have had a concussion at some point, and some of them have shown concussion symptoms more than once, according to a 2017 study (Journal of the American Medical Association, Sept. 26). Researchers working on the study, which looked at 13,000 U.S. kids in grades 8 to 12, concluded that contact sports had the strongest association with concussion symptoms.

Alarmingly, the data suggested that the rate of concussion among teens is higher than previously indicated by emergency room visits—and other research (Mayo Clinic Proceedings, December 2017) suggests that overall, only about one-third of high school sports coaches and athletes are aware that a concussion signals an injury to the brain. In that study (which covered a wide range of contact and non-contact sports, including football, soccer, hockey, baseball and wrestling), coaches were more clued in than their kids about whether players should be removed from the field after an injury, but kids were better at identifying concussion symptoms.

It isn’t just teen athletes who are at risk for concussion. For example, all of us who drive should get informed about concussion symptoms, since automobile accidents raise your risk. It doesn’t have to be a severe accident either, especially if you’re a frail older adult.

Falls are another risk factor for concussion symptoms, particularly in seniors and young children who are just getting on their feet and learning how to walk. If you’re an older adult and you fall, it’s vital to inform your doctor and be aware of what signs might be concussion symptoms. The same goes if you’re the parent of a toddler or active preschooler.

Where the latter are concerned, keep in mind that if a toddler or young child has concussion symptoms, he or she may not be able to tell you. You also may confuse symptoms such as irritability and crying for “normal” toddler tantrums. If your child is excessively cranky, uninterested in playing, appears dazed and/or listless, and is physically uncoordinated (for example, walking unsteadily compared to his or her usual gait), contact the pediatrician immediately. If you know your child has incurred a blow to the head, seek medical advice immediately even if he or she doesn’t seem to be hurt and there is no visible bump.

Avoiding sports where concussion is a particular risk—football especially—is a step some parents and teen athletes take in order to avoid concussion symptoms. Even so, football remains a popular sport for kids: There are more than 1 million players of high-school age, while the Pop Warner kid leagues have about 250,000 players. Fortunately, the injury rate for these younger kids is lower than it is for high school and college-age athletes.

The American Academy of Pediatrics (AAP) has issued guidelines intended to keep teen athletes safe, particularly if they play football. The AAP recommends these precautions:

Holding off on tackling until kids are bigger and stronger may help prevent concussion injuries in the youngest athletes. But it also means they will have to learn how to tackle—and absorb the impact of a tackle—when they and their opponents are bigger and stronger, and can potentially do more damage to each other. Greg Landry, MD, FAAP, who co-authored the AAP recommendations, agrees that this is a paradox and adds that it “makes it so important for leagues to teach proper tackling techniques and skills to avoid and absorb tackles, even if no tackling occurs throughout the seasons.”

Protect Yourself and Your Loved Ones from Concussions

Follow these tips for lowering the risk of concussion symptoms: