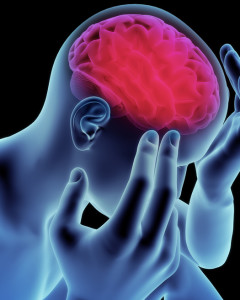 Brain aneurysm symptoms, among them headache behind eyes or between eyes, are extremely rare, but when they occur, they're serious and require quick attention.

When trying to figure out the reason behind a headache, you might find yourself wondering if you’re having brain aneurysm symptoms. Dilated pupils, blurred or double vision, and eye-region pain (a headache behind eyes, a headache between eyes, or a headache above eyes) all could be signs to seek medical attention: They may be brain aneurysm symptoms signaling that a blood vessel in the brain is leaking or is about to rupture. The latter condition is fatal in about 40 percent of cases.

So why do brain aneurysm symptoms occur, and could your headaches (particularly a headache behind eyes) be a warning sign? First, it helps to know what an aneurysm is.

What Is a Brain Aneurysm?

Aneurysms are weak areas in the arteries that bulge outwards to form a balloon. You can develop an aneurysm anywhere in your body, but they are especially common in the aorta, which is the main artery carrying oxygenated blood from the heart into the body. If an aneurysm occurs here, it’s called an aortic aneurysm, and it can develop in the abdomen or the chest area.

It’s less common to develop a brain aneurysm (also called a cerebral aneurysm), but certain risk factors increase your vulnerability. For example, aneurysms are more common in people age 40 and older (particularly women), people with a family history of brain aneurysms, and people who’ve suffered head injuries. High blood pressure and atherosclerosis (hardened arteries) also increase your risk, as do inherited conditions that weaken blood vessels (for example, vascular Ehlers-Danlos syndrome, in which reduced levels of a protein called collagen render body tissues fragile), and blood vessel abnormalities in the brain. Smoking and/or drinking heavily and a history of cocaine abuse also can factor in.

If you fit into any of these categories, it’s important to be aware of which brain aneurysm symptoms might signal a medical emergency.

Certain brain aneurysm symptoms can suggest the presence of a large unruptured aneurysm. As noted above, these symptoms include:

Other brain aneurysm symptoms red-flag a possible rupture. Even though the bleeding from a rupture typically lasts only for a few seconds, it can damage brain cells and increase pressure in the brain, disrupting the flow of oxygen. The pressure also can block the flow of cerebrospinal fluid around the brain, causing a build-up of fluid that further increases damaging pressure on the brain. Increased pressure can result in a coma, brain damage, and/or death.

Even if you survive the immediate aftermath of a rupture, blood vessels in the brain can gradually constrict in the days and weeks afterwards. Called vasospasm, this condition can trigger a stroke. Symptoms:

Q: My husband has a small brain aneurysm. What are the chances that it will rupture?

A: Brain aneurysms are weak, bulging areas in arteries that supply blood to the brain. They have a greater chance of rupturing if they’re growing larger than if they remain stable, according to recent research.

About one in 50 Americans has a brain aneurysm, frequently with no symptoms. However, about 30,000 people annually suffer a rupture, with blood leaking into the brain and causing serious damage or even death. In past years, aneurysms smaller than seven millimeters (mm) have often been left untreated, but researchers have found that over a lifetime, about one-third of all brain aneurysms eventually ruptured, including around 25 percent of smaller aneurysms, with size having little effect on rupture risk.

Risk factors such as smoking, age, hypertension, location of the aneurysm, and alcohol consumption all appear to play an important role in rupture risk. Women who smoke and have aneurysms that measure seven mm or more are particularly at risk, while non-smoking men with low blood pressure have a very low risk, according to a recent study.

It’s possible to have a brain aneurysm and not be aware of it, and not all brain aneurysms rupture. If you’re diagnosed with a brain aneurysm that hasn’t leaked or ruptured, your doctor will consider a number of factors pertaining to your brain aneurysm symptoms (including the size and position of the aneurysm, your age and overall health status, and your family medical history) before recommending a course of action.

It’s possible that observation with regular imaging scans may be recommended if your doctor thinks that modifying certain risk factors—for example, taking medications to control high blood pressure, and quitting smoking—may help prevent your brain aneurysm from rupturing. But if your brain aneurysm needs treatment to reduce the risk for future leakage or rupture, you may be advised to have surgery to seal the aneurysm. Options include:

Endovascular coiling is carried out using a catheter, which is inserted into an artery in the groin and maneuvered up to the brain aneurysm. Tiny coils of platinum wire are then passed through the catheter into the aneurysm to form a bundle of coils that seals it off. This is open surgery, and requires that a small section of the skull be removed so that a small clip (or clips) can be positioned at the base of the aneurysm, to cut off its blood supply.

If a brain aneurysm is particularly large, or has damaged the artery, your doctor may recommend bypass surgery. This involves closing off the affected artery and rerouting the blood supply through a grafted-on blood vessel taken from elsewhere in the body.

Originally published in 2016, this story is regularly updated.