Home » Daily » Nutrition » The Health Benefits of Raspberries and Blueberries 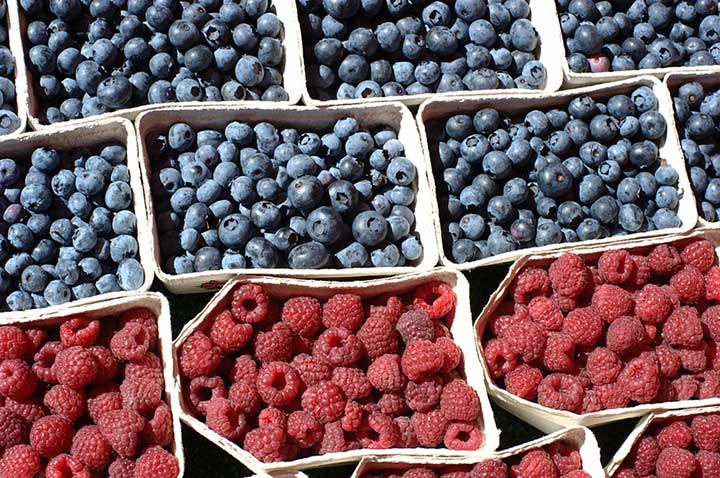 These berries really don’t mess around when it comes to maintaining good health so be sure to stock up!

Who doesn’t love the smell of fresh blueberry muffins baking or the first bite of tang from a delicious raspberry tart? These tasty treats are not only pleasing to the senses, they are loaded with nutrients. Polyphenols, such as flavonoids and anthocyanins, and other potent antioxidants account for the vast health benefits of raspberries and blueberries as well as their deep red and blue colors. If you are not already doing so, consider eating raw berries daily—it’s an amazing way to change your life.

The Top 5 Health Benefits of Raspberries and Blueberries

#1. They slow down the aging process. Did you know that oxidative stress is the root cause of accelerated aging and nearly every health challenge? Indeed, oxidative stress is the causative factor in the pathogenesis of many major diseases: Parkinson’s, Alzheimer’s, cancer, cardiovascular disease, high blood pressure, diabetes, muscular degeneration and others. So, the key to preventing pre-mature aging and the development of chronic health problems is to limit oxidative stress in the body. And, the way to do that is by consuming antioxidants found in food. Extensive research confirms that the most powerful antioxidants in berries are a class of polyphenols known as anthocyanins. Berry anthocyanins strongly combat oxidative stress.

What may be more exciting is that berries can slow down the aging process externally, too. The high vitamin C content in berries help keep collage building underneath the skin so the skin stays firm, toned, elastic-like, younger looking, and younger feeling. (Simply put, eating berries regularly can help prevent wrinkles and excessive aging of the skin!)[1]\

#2. They slow down mental decline, improve memory. Berries are also well-known for their protection against age-related decline of memory and their ability to enhance cognitive performance. One reason berries are so beneficial for brain health is because the flavonoids they contain are able to cross the blood-brain barrier. This enables them to influence the region in the brain associated with memory and motor function. In addition, the anthocyanins in berries aid the brain in the production of dopamine, a chemical that is critical to memory function, coordination, and your mood.

In a study published in the Annals of Neurology, researchers followed over 16,000 women for over 20 years. The women who ate a greater intake of anthocyanins and flavonoids from berries experienced slower cognitive decline. And, those who reported eating the most berries delayed cognitive decline by 2 ½ years.[2]

Another study found that drinking a couple of cups of blueberry juice each day can give aging memories a boost. The study focused on people in their 70’s with age-related memory problems. One group of participants drank 16 to 20 ounces of a commercial blueberry juice every day for two months while the control group drank a non-juice beverage. At the end of the study, the group who drank blueberry juice showed significant improvements on tests for learning and memory compared to the control group.[3]

#3. They clear the brain of toxins. Berries have also been found to promote autophagy – the brain’s natural housekeeping mechanism. To evaluate the ability of the berries to clear toxic accumulation in the brain, researchers from the Human Nutrition Research Center on Aging at Tufts University fed rats a steady berry diet for two months. The researchers then exposed the rats to radiation and looked at the effects on their brains. After 30 days, the berry-fed rats experienced significant protection against the radiation compared to the control group.[4]

Most diseases of the brain such as Alzheimer’s and Parkinson’s show an increased amount of toxic proteins. Since one of the health benefits of raspberries and blueberries is that they promote autophagy, they are able to help decrease this toxic accumulation.[5]

#4. They dilate and relax blood vessels improving intimacy response. Berries have also been shown to relax blood vessels. The health benefits of this are twofold: First, consuming raspberries and blueberries can help regulate blood pressure levels. Second, they can be used as a natural remedy for impotency because relaxation of blood vessels paves the way for enhanced blood circulation. Berries are also good sources of fiber, which can help in flushing out excessive cholesterol levels, the failure of which can increase the risk for both heart disease and impotence in men.[6]

#5. They reduce your cancer risk. Blueberries and raspberries are truly anti-cancer fruits. Multiple studies have proven their ability to both prevent and fight many forms of this dreaded disease, and such properties should be utilized to the fullest! For example, a major component of blueberries called pterostilbene, has been found to protect against colon cancer.  And, raspberries contain ellagitannins, which are converted in the body to ellagic acid. Ellagic acid is a powerful chemical that kills breast cancer cells. Both blueberries and raspberries have been shown to stimulate apoptosis (death) of human cancer cells including oral cancer, cervical cancer, prostate cancer and others.[7-10]

How to Get All the Health Benefits of Raspberries and Blueberries

These berries really don’t mess around when it comes to maintaining good health so be sure to stock up! Try to eat a minimum of 1 to 3 cups of berries daily. You can add your berries to juices, smoothies or even on top of your favorite salads.  Also, keep in mind that berries sprayed with toxic herbicides and pesticides can do more harm than good. So, the best way to avoid these pesticides is to buy organic produce.

How Do You Take Advantage of the Health Benefits of Raspberries and Blueberries Year Round?

If you have decided to start taking advantage of the remarkable health benefits of raspberries and blueberries, then you obviously need a year round source. The growing season is only a couple of months long so what do you do the rest of the year? Share with our readers how you access or else stock up on organic blueberries or raspberries for year round consumption. Place your response in the Comments section below so other readers can benefit from your experience.

This article was originally published in 2013. It has since been updated.