Home » Daily » Stress & Anxiety » Do You Have Anger Issues? Losing Your Cool Can Harm Your Health 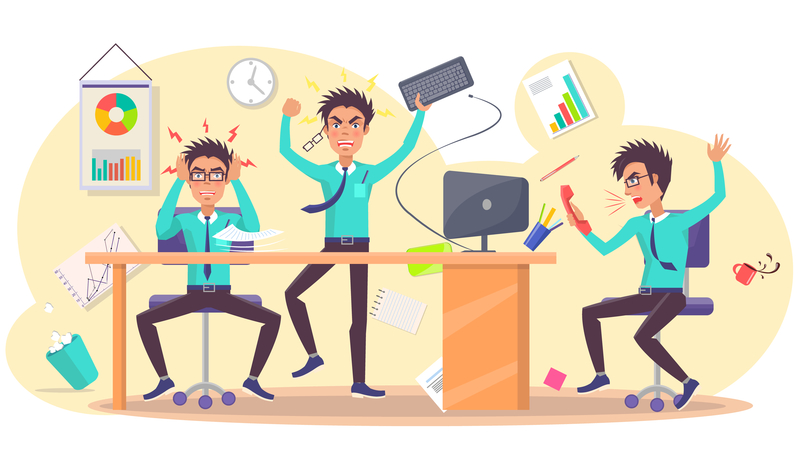 It seems easier than ever to get racked off about, well, everything—big or little. Anger issues, however, can have a negative impact on our health, as our post explains.

Remember that old adage, “Don’t get mad, get even?” Sounds a bit cathartic, doesn’t it? Who wouldn’t love to get one over on the guy who cut you off in traffic? Or tee off on the solar energy salesman knocking on your door? Or give a verbal whooping to the overbearing boss who never says, “Thank you”? [Ed. note: Er, thank you for this post, Shandley!] Anger affects each of us, but it’s how you respond to frustrating and stressful situations that determines whether you have anger issues.

Actually, anger is a normal, healthy reaction. Without it, we couldn’t protect ourselves from dangerous situations (or people). Too much anger, however, can point to a serious problem. Whether you react in a passive-aggressive way (for example, making snide comments behind someone’s back), or keep your anger bottled up until you explode, or become hostile and violent, anger issues can wreak havoc on your physical and mental health. Your home, work, and social life may also take a hit if you’re chronically mad.

Just how bad is anger for your overall well-being? We’ve got the answer to this important question—and more.

NEED HELP TO CALM DOWN?

Learn how to tame your temper by reading our post “Anger Management: 15 Ways to Tame Your Temper.”

What Happens When We’re Angry?

When we have anger issues, our bodies go into overdrive, activating our sympathetic nervous systems, which are responsible for our flight-or-flight response. Hormones and neurotransmitters (e.g., adrenaline and cortisol) are released, which spur us into action (or reaction) and suppress functions (e.g., digestion and immunity) that aren’t immediately necessary.

“[This] can have damaging effects on the body’s immune system as well as be harmful if a person has an underlying physical condition such as heart disease or the potential for a stroke,” says Dr. Howard Drutman, a psychologist in Roswell, Ga.

Chronic anger can also reduce our ability to fight off infections. To learn more about adrenaline and our stress response, read our post Adrenaline: Driver of Your “Fight or Flight” Response.

How Does Anger Affect Your Health?

According to researchers of The CARDIA Study, “Hostility is a personality and character trait with attitudinal (cynicism and mistrust of others), emotional (anger), and behavioral (overt and repressed aggression) components.”

Hostile people are often destructive and hurtful to others. They throw things, utter threats, attack others, gossip, and are sarcastic in a hurtful way—all in an effort to harm the object (or person) causing their wrath.

Having high levels of anger and hostility increase your risk of coronary artery disease, hypertension, coronary atherosclerosis (a.k.a. hardening of the arteries) and death, say researchers of a study published in the Journal of the American Medical Association. These effects are noticed whether you’re the type to vent your frustrations or bottle them up.

Another study by researchers at Washington State University found that being hostile, especially when you’re over 50, can increase your risk of heart attack. Turns out having an explosive temper causes calcium deposits that clog your coronary arteries, increasing the risk of cardiovascular problems.

While the scientists didn’t provide evidence to back this up, Dr. Bruce Write, medical director at the Washington State University Health and Wellness Center and lead author of the study, thinks there are two reasons why this happens: 1) People who are prone to angry outbursts (for example, slamming doors and yelling) experience temporary blood pressure surges and increased heart rate, which can damage blood vessel walls. 2) Hostile people are more likely to release high levels of stress hormones, which will damage the coronary arteries and could lead to a blockage.

Anger issues also increase a person’s risk of participating in unhealthy behaviors such as smoking, overeating, over-drinking, and reduced physical activity, all of which can lead to cardiovascular problems and death, found researchers of a study published in the American Journal of Epidemiology.

According to Drutman, genetics can predispose a person to experiencing more anger issues than others. If one or both of your parents were prone to angry outbursts, for instance, you may be at risk of reacting the same way. These types of people “are often seen as being hot-headed,” he explains. “[They] appear to have a low tolerance for frustration.”

Other external stressors can also trigger fury. “People can become angry over morally reprehensible events that take place,” Drutman says. “They can also become angry when they feel a situation ‘should’ be different than it is.”

Other anger triggers include excessive worry, upsetting memories of a traumatic event, financial problems, relationship difficulties, and frustration over uncontrollable events or outcomes.

So, Is it Bad for You to Be Angry?

Not necessarily. As mentioned earlier, anger is a natural response essential to survival. It helps us become more powerful and aggressive, encouraging us to fight and defend ourselves when threatened.

“Anger can signal that there is a problem that needs to be addressed,” says Drutman. Anger issues become problematic when they become too extreme, leading to such emotions as hostility, and cause us to lash out, verbally or even physically.

Can Anger Issues Be a Sign of Another Disorder?

Yes, says Drutman. “Anger is often a symptom of other mental disorders. It’s common to see angry feelings and behavior in individuals with anxiety and depression.”

According to researchers from Harvard, Columbia, and Duke universities, almost 22 million Americans have explosive anger issues (the type that cause them to impulsively smash and throw things, for instance) and easy access to guns. Of these, 8.9 percent possess firearms and 1.5 percent carry their guns outside the home.

Those with anxiety tend to worry excessively and have high—and often unrealistic—expectations for the way in which things should be done. Depressed individuals often feel angry that their situation is different than they feel it should be. As a result, both types of people feel frustrated and angry at others and themselves, explains Drutman.

People with personality disorders also struggle with significant anger issues. Often, though, they express it in a passive aggressive manner. “These individuals are often very hostile [and] believe that other people are trying to get something over on them, [so] they must always be on guard,” Drutman explains.

What are the Signs of Anger Issues?

As mentioned above, our bodies go into fight-or-flight mode when we’re angry. The result: similar symptoms suffered by those with high stress levels.