Home » Daily » Nutrition » Binge Eating Disorder: What It Is and How It’s Treated 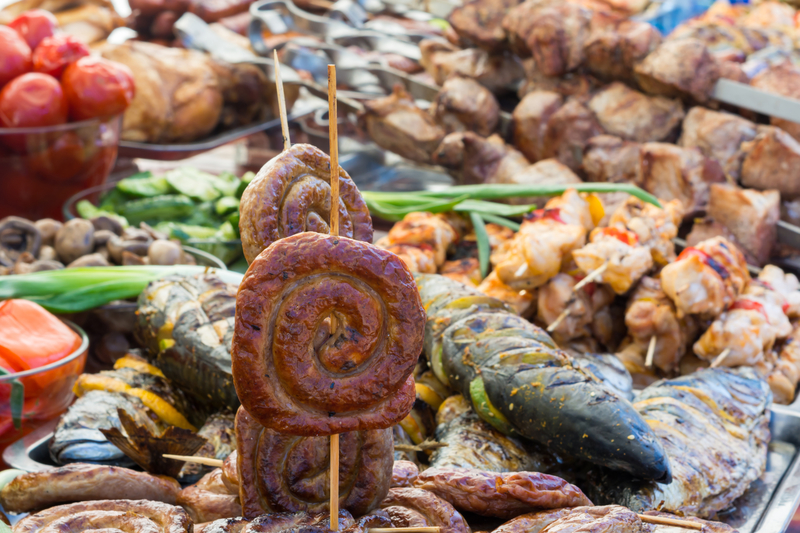 This smorgasbord of sweets and other foods might be too much to resist for people with binge eating disorder.

Remember that time you cleared your second plate and then went whole hog at the Thanksgiving dessert table? You may not recall the exact foods you ate, but the bloating, nausea, and discomfort that ensued are likely etched into your brain. Now imagine suffering these feelings multiple times a week, or even daily. Add depression, embarrassment, and self-loathing into the mix and you’re starting to get a picture of what it’s like to live with a binge eating disorder.

According to the National Eating Disorders Association, binge eating disorder is the most common eating disorder in the United States. It was recently classified as an official mental illness by the American Psychiatric Association. Since this condition can be fatal, experts are happy that it’s finally getting the spotlight it deserves. The more attention binge eating disorder receives, the more likely it is to be recognized, addressed, and treated.

What Is Binge Eating Disorder?

“Eating disorders are not fads, phases, or choices,” states the Binge Eating Disorders Association. “They are very complex, serious mental illnesses. They are deadly. They have the highest mortality rate of all psychiatric disorders.”

Binge eating disorder is characterized by the act of eating extreme amounts of food. Those who suffer from this condition feel powerless to control either what or how much they’re eating. They often feel ashamed by their overeating but—even though they’re aware that it’s dangerous behavior—are unable to stop.

What Are the Signs of Binge Eating Disorder?

The following are the most common signs of a binge eating disorder, according to the National Eating Disorders Association. In order to be considered this type of ailment, the symptoms have to be observed weekly for a minimum of three months:

While no one knows the exact cause of binge eating disorder, it is thought to be a product of a combination of biological, environmental and psychological factors. Those with other mental health disorders (e.g., depression) are at an increased risk of developing the illness. A study published in Eating Behaviors found that women veterans had higher rates of binge eating than those who didn’t serve. The researchers linked this increase to mental health conditions such as depression, anxiety, post-traumatic stress disorder (PTSD), and substance abuse.

Body dissatisfaction and low self-esteem can also be to blame for a binge eating disorder. Those who’ve suffered trauma (e.g. sexual abuse) or social pressures to be thin sometimes turn to binge eating as a coping mechanism. Another potential causal factor: genetics. Many people who suffer from this condition have families that overeat or binge. Another possible predictor is procrastination. Chinese researchers discovered a strong connection between procrastination and binge eating behavior.

Should those with binge eating disorder diet? No. According to the Binge Eating Disorder Association, dieting can increase the shame involved with the disorder. This can backfire, causing the person to binge even more.

Who Has Binge Eating Disorder?

According to the Binge Eating Disorder Association, “an estimated 3.5 percent of women, 2 percent of men, and 30 to 40 percent of those seeking weight loss treatments can be clinically diagnosed with binge eating disorder.” The condition affects three times the number of people diagnosed with anorexia and bulimia.

You don’t need to be overweight to have binge eating disorder. While most people with this condition are overweight or obese (about 70 percent), a small number of them are of a normal weight. Those with the illness often feel depressed, disgusted and guilty about their overeating. They may try to diet and eat a “normal” amount of food, but this restriction often results in further bingeing. While some cases of the disorder may be short-lived, others may recur or persist for years if the person doesn’t get help.

What Are the Dangers Associated with Binge Eating Disorder?

Those who suffer from binge eating disorder may develop both physical and psychological problems. They may also struggle with the following complications:

Is There a Cure for Binge Eating Disorder?

While there’s no real way to prevent a binge eating disorder, seeking aid from a medical professional (i.e. a psychiatrist) can help reduce the effects of the illness.

Sadly, many people with this condition are so ashamed of their overeating that they won’t seek help. They’ve become so adept at hiding their symptoms that many suffer in silence, without even their closest friends or relatives knowing there’s a problem.

For those who do seek help, common treatments include psychotherapy (including cognitive and behavioral therapies), medications (e.g., antidepressants and anticonvulsants), nutrition counseling (to learn normal eating strategies), and group or family therapy. Another up-and-coming therapy, according to a study published in the Journal of Medical Internet Research, involves the use of virtual reality.