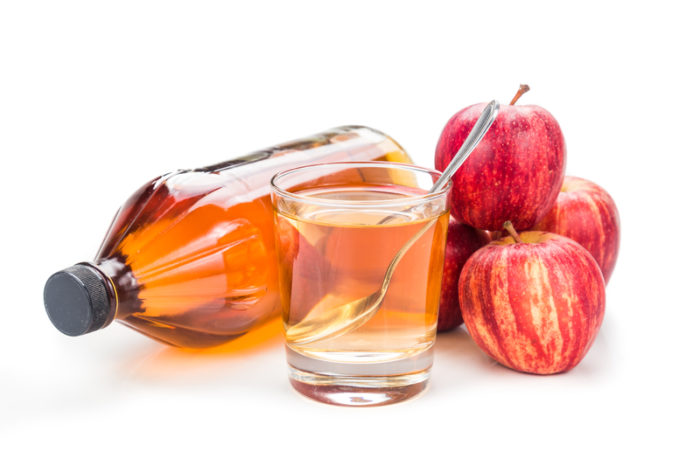 Home remedy fans point to apple cider vinegar as a way to fend off everything from cardiovascular disease and cancer to diabetes and sore throats.

What Is Apple Cider Vinegar (ACV)?

Vinegar can be made from a variety of fermentable carbohydrates including grapes, berries, rice, and, you guessed it, apple. During the fermentation process, yeast turns food sugars into alcohol. If acetic acid bacteria (acetobacter) are present, the alcohol is then converted to acetic acid.

Many commercial vinegars are made by a rapid fermentation method. Slower, more natural methods result in the formation of a slime, composed of yeast and bacteria, that you see in the bottom of raw, unfiltered apple cider vinegar. Yes, it sounds gross, but it may actually be good for you. (See also “Top 5 Healthy Beverages.“)

Along with acetic acid, vinegar also contains vitamins, mineral salts, amino acids, polyphenolic compounds (which have antioxidant properties), and nonvolatile organic acids. In the United States, vinegar products must contain a minimum of 4 percent acetic acid per 100 ml, as specified by the Food & Drug Administration.

Apple cider vinegar (ACV) has been touted to help with a wide range of conditions, including cardiovascular disease, cancer, and diabetes. It also is thought to reduce or treat infection. As with many alternative therapies, however, research on its effectiveness is scanty.

The reasons for scant research? For one thing, there has been little money available to researchers; for another, the studies that have been done are small and lack statistical power.

Yet there are some results worth considering.

Dietitian Carol Johnston of Arizona State University’s Department of Nutrition has been studying the effects of vinegar on blood glucose for years. Johnston’s research indicates that vinegar can help reduce blood sugar in healthy people and those with prediabetes and type 2 diabetes (late-onset). “What acetic acid is doing,” she theorizes, “is blocking the absorption of starch.”

If you have diabetes, it’s important to tell your doctor, as apple cider vinegar may interfere with medication.

Data collected by another research team suggests that vinegar ingestion at bedtime may have a favorable impact on “waking glucose concentrations in type 2 diabetes… but much more work is required to determine whether vinegar is a useful adjunct therapy for individuals with diabetes.”

Again, however, more research is needed.

A popular use of apple cider vinegar is in weight loss. Some find that ACV reduces their appetite and makes them feel full sooner, perhaps because it delays gastric emptying.

One study looked at 175 obese Japanese adults. Researchers found that “body weight, BMI, visceral fat area (belly fat), waist circumference, and serum triglyceride levels were significantly lower in both vinegar intake groups than in the placebo group.” However, the weight loss was minimal—two to four pounds over 12 weeks.

The study suggests that apple cider vinegar may prove to be a useful adjunct to portion control, a healthy diet, and regular exercise in the weight loss battle.

Austin dermatologists Adam Mamelak, MD, and Miriam Hanson, MD, support the use of apple cider vinegar as part of your skin and hair care routine.

Dr. Mamelak explains ACV can help “remove bacteria and excess oil from the skin that can contribute to acne formation.” He explains it is also useful for treating toning skin and for dandruff, yeast infections, insect bites, scrapes, abrasions, and warts.

Dr. Mamelak and Dr. Hanson warn a careful approach; ACV is acidic and can irritate some people’s skin and scalp. They also advise that you test your reaction to ACV with a “patch test” on the skin of the inside of your arm. Never use ACV on the delicate skin of your genital area or leave on any skin for a prolonged time, as it can cause chemical burns.

Other Potential Uses of ACV

There’s also evidence—albeit lower-quality evidence—of the benefits of apple cider vinegar with a number of other health conditions:

ACV is pretty safe, if taken in small doses and diluted. According to one report, there are rare reports of adverse reactions. ACV is acidic by nature and so can cause acidic injuries and inflammation of the back of the throat, esophagus, stomach, and skin. It also can erode the enamel of the teeth, so if you drink it, rinse your mouth thoroughly with water and wait 10 minutes before brushing teeth. ACV should not be used for teeth whitening as it may cause serious damage to the teeth.

Most of the claims about apple cider vinegar’s health benefits are not supported by compelling research. Even so, ACV may be considered as a complementary therapy to traditional medicine in weight loss, minor sore throats, and coughs, and in pre-diabetes and type 2 diabetes (only with your doctor’s consent).

If taken in small amounts, in a diluted form, as a drink or in salad dressing, ACV is pretty safe. Just remember to rinse your mouth to prevent damage to tooth enamel.

I first tried apple cider vinegar around a week into a bout of sinusitis, when I was struggling to make time to visit a doctor. As I drank the weird-tasting concoction, I was skeptical. But 10 minutes later, the pain under my eyes was gone, as was with the irritating cough of postnasal drip.

While I was unable to find any research studies on apple cider vinegar treatment for coughs and colds (after all, who on earth would fund that kind of research?), I have countless reports from friends and family that it works. Its effectiveness probably comes from the natural anti-inflammatory/anti-infection properties of apple cider vinegar.