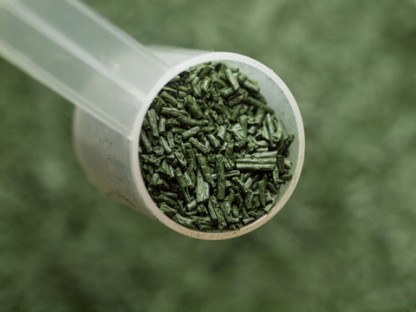 The Aztecs and Mayans began eating spirulina as early as 1450. Now, almost 600 years later, it is used as an essential food for NASA astronauts. This algae’s enduring popularity is due to its tremendous nutritional value. Nearly 70% of its dry weight consists of complete protein, and the remainder consists largely of essential fatty acids. It is high in vitamins, minerals, and antioxidants, and contains significant quantities of the following basic nutrients:

In addition to its nutritional benefits, spirulina protects the brain from free-radical damage by increasing the activity of two enzymes: catalase and glutathione peroxidase. In contrast to simple antioxidants, which can only neutralize single free radicals before becoming inactive, these enzymes continue to work if they are provided with the proper vitamins and minerals. When they are functioning properly, they may help prevent memory loss.

Spirulina benefits also include protection from Alzheimer’s disease by reducing levels of amyloid-beta proteins throughout the brain. People with Alzheimer’s disease have abnormally high concentrations of this protein, which accumulates into plaques and leads to severe memory loss and other problems

Spirulina may suppress the creation of Th2 cells, a part of the immune system that can contribute to inflammation. In the case of rhinitis, asthma, or allergies, inflammation can be an unnecessary overreaction to pollen or other irritants. By decreasing the inflammatory response and relaxing the airways, spirulina may provide some relief. Spirulina has also been linked to lower LDL cholesterol and triglyceride levels.

Spirulina is available as a powder that be mixed with water or added to a smoothie, trail mix, or any recipe. To receive the benefits listed above, use 1 tablespoon. You can also buy it in energy bars and seasoned sunflower seeds. Spirulina is also available in capsule and tablet form.