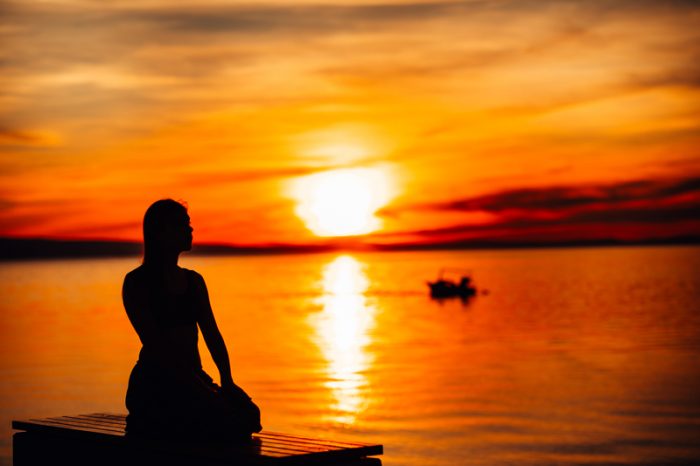 Transcendental meditation involves the practice of taking 20 minutes twice each day to clear your mind, repeat a mantra, and meditate.

Think meditation is all about banishing outside thoughts, focusing on internal struggles, and listening to someone calmly guide you toward a state of relaxation? Think again. Transcendental meditation, or TM, is a widely practiced, highly effective form of repose that involves none of these things.

Yes, you sit quietly with your eyes closed, but that’s where the similarities end. Instead of forcing your already tired brain to be more “aware” of your thoughts and emotions, you’re encouraged to do nothing in transcendental meditation beyond repeating a mantra, which is given to you by a trained instructor.

The result: a greater state of mental relaxation and an impressive list of health benefits ranging from relief of ADHD symptoms to prevention of a heart attack.

What Is Transcendental Meditation?

This simple technique was introduced by Maharishi Mahesh Yogi, an Indian spiritual leader who brought transcendental meditation to the Western world. TM involves repeating a mantra (a word, phrase or sound) while seated with your eyes closed. The goal: to improve concentration, quiet one’s thoughts and increase awareness.

As described by Kathy Connor, a certified TM instructor and Director of the Transcendental Meditation Program for Fairfield County, Conn., “The TM technique is a process that allows the active mind to settle within toward a field of peace and order at deeper levels of the mind. It is not a set of beliefs, philosophy, religion or lifestyle but a practice to unfold the full value of the mind.”

According to Greek researchers, transcendental meditation encourages a reduction in mental and physical activity. The result: Those who practice TM achieve a calm and unique mental state called transcendental consciousness, which differs from waking, dreaming or sleeping. “This experience,” the researchers say, “is deemed responsible for the restoration of normal function of various bodily systems, especially those involved in adapting to environmental stressors or challenges.”

Is Transcendental Meditation Good for Your Health?

Absolutely. Practicing transcendental meditation has been proven as one of one of the best ways to reduce stress and anxiety. In addition to promoting a state of relaxation, regular sessions of TM can increase the resilience to stress, lower blood pressure and improve brain function.

Need a mood boost? Want to reduce pain? Practicing transcendental meditation can do that as well. Plus, it can treat (and possibly prevent) serious illnesses such as hypertension and stroke while reducing the effects of metabolic syndrome and pre-diabetes.

The pros don’t stop there. A study published in Mind & Brain: The Journal of Psychiatry found that practicing transcendental meditation led to a significant improvement in brain functioning and processing as well as language-based skills in students with ADHD. Another bonus: Practicing TM can reduce alcohol use (and likely prevent substance abuse), especially in males. A study of 295 university students published in Cardiology Research and Practice found that males who practiced transcendental meditation consumed less alcohol than they had prior to meditating.

How Do You Do Transcendental Meditation?

The first step in taking on transcendental meditation: Find a certified instructor to explain what it is and how it’s done. You’ll also learn your mantra. While this form of meditation is simple to practice, it’s important to learn the proper way to do it before you begin.

After that, you’ll need to carve out 20 minutes twice each day to meditate. During that time, sit quietly with your eyes closed and repeat the mantra you learned. There’s no need to “close your mind” or worry about impeding thoughts during your practice, just repeat the word, phrase or sound. “The TM technique requires no concentration or control of the mind, nothing is guided to achieve an experience or result, and there are no suggestions or passive observations,” Connor explains.

What Is the Difference Between Transcendental Meditation and Other Forms of Meditation?

Transcendental meditation is the only form of meditation that allows your mind to truly relax, says Connor. Below are the three classifications of meditation and their impact on the brain and consciousness, as described by Connor:

Focused attention meditation is a technique devised to help a person concentrate. Those who practice this form of meditation try to clear their minds of all outside thoughts. “During the practice of a concentration technique, the brain is actually more active showing an increase in gamma brain wave frequency,” Connor explains. It takes effort to push thoughts from your mind.

Automatic self-transcending meditation directs the mind to a silent, peaceful state without involving the consciousness. “The TM technique allows the thinking mind to move inward, beyond the conscious mind to experience a settled state of awareness with no intention to produce a specific experience so that the mind will go inward, toward the source of thought, pure consciousness,” Connor explains.

What is Your Personal Mantra?

As mentioned earlier, a mantra is a word, phrase, or sound that is used to help increase concentration. Or, as Connor explains, “The mantra is a ‘vehicle’ that settles the active thinking mind from the surface to the depth. While a mantra has no meaning, it has an effect on the physiology when used properly.” To learn more about your mantra and how to use it, you should attend sessions lead by a certified instructor.