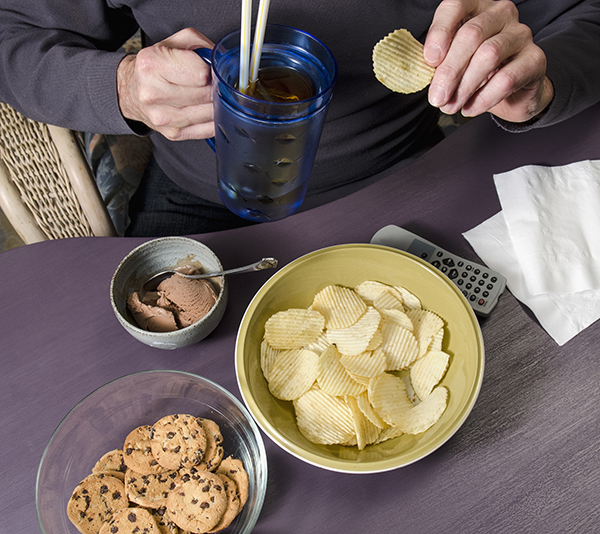 The way we live may contribute to prostate cancer risk. Poor diet, obesity, and a sedentary lifestyle all work against us.

The glandular cells of the prostate play an important role in reproduction, producing the fluids that help make up semen. These tiny cells also serve as the birthplace for nearly all prostate cancers. Genes in these cells slowly mutate, leading to the formation of abnormal cells. The cells proliferate and cluster into tumors, thus giving rise to prostate cancer. But exactly what sparks this process and what causes prostate cancer remain elusive.

Scientists, however, continue to piece together the mosaic of genetic and lifestyle factors that seem to play a role in prostate cancer’s development. Their efforts are identifying not only whether your genetic code may place you at higher risk for the disease, but also potential avenues for how to avoid prostate cancer.

As with many cancers, the answer to the question of what causes prostate cancer lies partly in genetics. Prostate cancer appears to develop along a number of molecular and genetic pathways. Although having a genetic predisposition to prostate cancer doesn’t necessarily guarantee that you’ll get the disease, it does increase the likelihood.

A family history of prostate cancer—e.g., your father or brother had the disease—more than doubles the odds that you’ll develop the disease, too. Your risk may be even greater if you’ve had several family members who’ve had prostate cancer, especially if they were younger when they developed the disease.

You might inherit an increased risk of prostate cancer not only from your male relatives, but also from your female ones. If a woman in your family developed breast cancer caused by mutations in the BRCA1 and BRCA2 genes, you may face a greater risk of prostate cancer. Additionally, some evidence suggests that men with BRCA-related prostate cancers, especially those tied to BRCA2, are more likely to present with more advanced and aggressive disease, and they also may have worse survival outcomes after prostate cancer surgery. 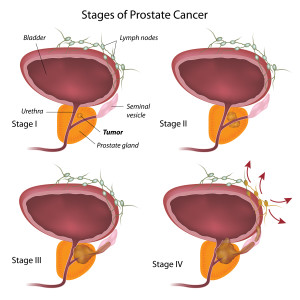 If you have received a prostate cancer diagnosis, your doctor will want to ascertain the grade (or Gleason score) and stage of your cancer. The grade and stage will determine treatment, which could include active surveillance. [Illustration: Dreamstime.com]

How Your Lifestyle May Influence Your Risk

In their ongoing search for what causes prostate cancer, researchers have raised suspicions that certain modifiable factors may raise prostate cancer risk, increase the odds of having more aggressive disease, and worsen your overall prognosis.

Studies suggest that being obese is associated with a greater likelihood of high-grade prostate cancer and death from the disease, as well as poorer outcomes after prostate cancer treatment. One potential reason for this finding is that obese men tend to have larger prostates, and since it’s more difficult to find cancer in a larger prostate, these men may be more likely to have their cancer identified at a later stage.

Also, men who are obese have, on average, lower levels of prostate-specific antigen (PSA) found in the blood test used to screen for prostate cancer. As a result they may be less likely to have a potentially dangerous prostate cancer diagnosed early on.

Obesity has been tied to chronic inflammation, the body’s response to infection or injury. Fat cells in the abdomen produce an array of inflammatory substances, including insulin-like growth factor, which has been associated with prostate cancer growth. Scientists have found pockets of inflammation in cancerous prostate cells, leading them to theorize that inflammation caused by an infection and/or dietary and hereditary factors may contribute to gene alterations that cause prostate cancer.

Evidence suggests a potential role of diet in prostate cancer, but exactly how your eating habits affect your risk of the disease remains unclear. Researchers have yet to prove conclusively if any individual food or food group causes or prevents the disease. Rather, your overall dietary pattern seems to influence your prostate cancer risk.

How to Reduce Your Risk of Prostate Cancer

Many experts consider a heart-healthy eating plan—rich in fruits, vegetables, whole grains, and healthful protein and fat sources, and low in saturated fat, added sugars, sodium, and processed foods—to be beneficial for prostate health, as well. For example, rates of prostate cancer are lower in Asia, but when Asians immigrate to the United States and other countries that follow a typical Western-style diet, their risk of the disease increases.

One study (Cancer Prevention Research, June 2015) found that men who adhered to a Western-style diet (abundant in red and processed meats, high-fat dairy, and refined grains) were nearly three times more likely than those who ate a more heart-healthy diet to die from prostate cancer.

Still, researchers are unsure whether the increased risk of prostate cancer is a result of consuming these unhealthy foods or the fact that people who follow a Western-style diet tend to eat fewer fruits, vegetables, and other foods containing nutrients that may protect against prostate cancer.

Some research suggests that other factors may be on the list of what causes prostate cancer or results in poorer outcomes from the disease, but further studies are necessary to confirm these associations: