Home » Daily » Prostate » Are You Keeping Tabs on Your PSA Levels? 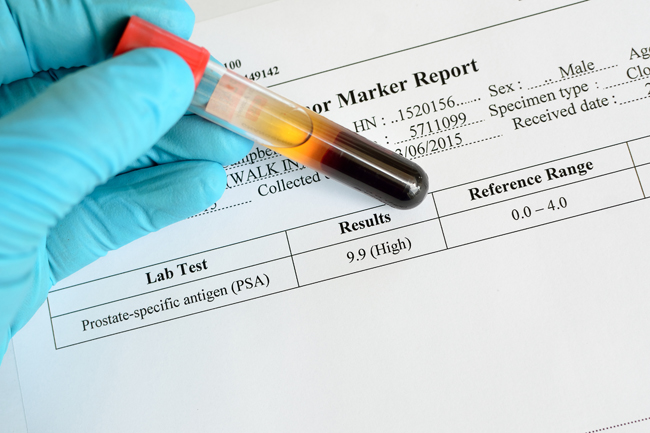 PSA tests have been at the center of controversy: Are they overused? A recent study suggests that they remain an important indicator of prostate conditions.

Three big letters: P-S-A. In the world of urology and men’s health, perhaps no three letters generate more controversy. Since the early 1990s, the prostate-specific antigen (or PSA) blood test has served as the cornerstone of prostate cancer early detection. Today, it remains at the center of a debate over prostate cancer screening and PSA levels.

PSA is a protein that the prostate normally secretes in small amounts into the bloodstream. Prostate cancer causes PSA levels to rise, and as they increase, so does the likelihood of prostate cancer. Proponents note that screening has improved the chances of identifying prostate cancer in its earlier, more curable stages.

Critics of screening note that prostate cancer, in many cases, is slow growing, and because the disease occurs most commonly in older men, many of these men will die with prostate cancer, not from it. And, they contend, since the PSA test cannot distinguish between indolent and more aggressive cancers, checking PSA levels and screening men for prostate cancer may unnecessarily subject them to complications from further testing, such as invasive biopsies, as well as urinary and sexual side effects that result from treatment of a cancer that may never threaten their lives.

So, in 2012 the U.S. Preventive Services Task Force (USPSTF), an influential government panel, recommended against routinely measuring PSA levels in men without prostate cancer symptoms, noting that the risk of harm from screening outweighed the potential benefits. The downside of screening includes unnecessary biopsies that carry the risk of infection, bleeding, erectile dysfunction and others. (Note: Earlier this year, the USPSTF released a research plan that will guide development of new recommendations regarding prostate cancer screening. Those new recommendations are slated for release sometime in 2017.)

Apparently, many men are heeding the task force’s advice, as research suggests that PSA screening and new diagnoses of prostate cancer declined after the recommendation. In one study, published Nov. 17, 2015, in the Journal of the American Medical Association (JAMA), researchers reported that among 20,757 men, PSA screening rates dropped from 36 percent in 2010 to 31 percent in 2013, the year after the USPSTF recommendation. The study authors noted that the most significant declines in screening occurred in relatively younger men (ages 50 to 64), who generally have longer life expectancies and, thus, would seemingly have the most to gain from prostate cancer screening.

“Decreased screening will most likely lead to fewer prostate cancer diagnoses,” the study’s senior author, Quoc-Dien Trinh, MD, of Boston’s Brigham and Women’s Hospital, said in a statement. “Some will think that this is a good thing, as fewer men will be subjected to the harms of overtreatment, while others may be concerned with its potentially catastrophic consequences, with more men presenting with advanced, metastatic prostate cancer.”

Findings from another study, published in the January 2016 issue of the Journal of Urology, seem to support concerns about the USPSTF recommendation raised by advocates of PSA screening. Researchers from Virginia Mason Health System, in Seattle, and the University of Washington compared the results of 1,416 men who underwent a prostate biopsy in the 2½ years before the task force’s recommendation to those of 310 men who had a prostate biopsy in the 2½ years afterward.

The number of biopsies performed dropped by 31 percent, and the majority of this decrease occurred in the detection of intermediate-risk cancers, the study found. According to the researchers, compared to the men biopsied before the task force’s action, men in the post-USPSTF group had higher PSA levels, were more likely to be diagnosed with prostate cancer of a higher clinical stage (stage 2b or stage 2c-3a), and had greater risk of being diagnosed with high-risk cancer.

“Results from our study support the argument that declining PSA screening may result in delayed diagnosis, potentially leading to avoidable cancer deaths,” study author John Corman, MD, said in a statement. “The reduction in the number of potentially unnecessary biopsies appears to have occurred at the cost of detecting fewer intermediate-risk prostate cancer tumors. Thus, the key concern is not only the increased risk of being diagnosed with high-risk disease, but, more importantly, the missed opportunity to offer curative intervention for patients with intermediate-risk prostate cancer.”

Instead of abandoning PSA screening entirely, the American Urological Association, American Cancer Society, and other experts recommend engaging in shared decision-making with your doctor, carefully reviewing the pros and cons of screening. Most organizations recommend that men begin discussions about screening around age 50 or 55 and younger for high-risk groups, such as African-Americans and men with a personal or family history of prostate cancer.

When making your decision about prostate cancer screening: