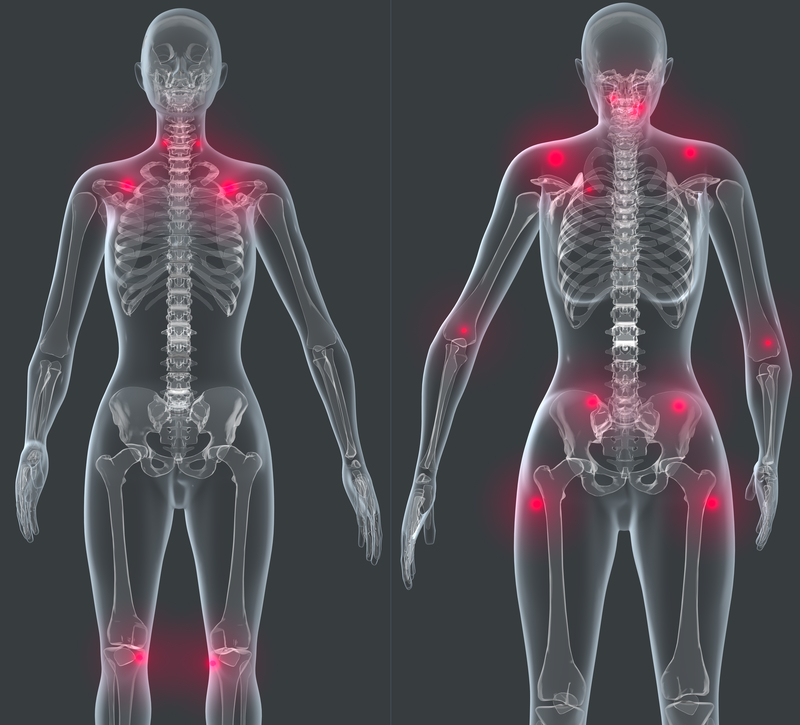 Fibromyalgia causes pain or tenderness at numerous points on the body.

How do we get fibromyalgia? There is likely a genetic predisposition in people to develop fibromyalgia, and it’s may be coupled with a triggering event, including physical and emotional trauma or infection, Dr. Witkin says. Another theory holds that fibromyalgia may be linked to a virus that could be responsible for chronic fatigue syndrome; however, the specific etiology is still unknown.

Fibromyalgia affects women far more than men. Among patients treated for the condition, the female-to-male ratio is almost 10 to 1. “In general, women often disproportionately suffer when in pain,” Dr. Witkin says. “They report having more pain than men, as well as feeling it more intensely.”

Rheumatic diseases are also more likely to strike women than men, and patients with these conditions also have a higher risk of fibromyalgia. Rheumatic diseases are known to cause chronic, often intermittent pain in joints and/or connective tissue, including rheumatoid arthritis (RA), systemic lupus erythematosus (lupus), polymyalgia rheumatica, and scleroderma.

As a clinical diagnosis, fibromyalgia is based on signs and symptoms and a patient’s medical history rather than on results of lab or imaging tests. In fact, Dr. Witkin explains, the condition is often “a diagnosis of exclusion,” meaning that rather than using a test to diagnose the disease, “lab tests or x-rays are often performed to rule out other health problems. Other conditions such as hypothyroidism, polymyalgia rheumatica, RA, lupus, and other inflammatory or autoimmune disorders sometimes mimic fibromyalgia, but these conditions can be ruled out by a physical exam and blood tests.”

Because fibromyalgia symptoms are often vague and are common to many other medical conditions, it often takes months—sometimes even years—to receive a diagnosis. In one national survey, one-quarter of the respondents said they suffered fibromyalgia symptoms for at least five years before being diagnosed.

With fibromyalgia, early detection is important. Patients diagnosed within a year of developing the condition are less likely to experience severe symptoms in the future.

First-line treatment for fibromyalgia involves the use of SNRI medications, according to Dr. Witkin. Among them: duloxetine (Cymbalta), milnacipran (Savella), and venlafaxine (Effexor), anticonvulsants such as pregabalin (Lyrica) and gabapentin (Neurontin), and tricyclic antidepressants such as amitriptyline (Elavil).

Other options include SSRIs such as fluoxetine (Prozac) and sertraline (Zoloft), and the muscle relaxants cyclobenzaprine (Flexeril) and tizanidine (Zanaflex).

The diagnostic criteria for fibromyalgia issued by the American College of Rheumatology includes:

Beyond medication, there are lifestyle changes that may help. You won’t be surprised, no doubt, that exercise is recommended. As Dr. Witkin explains, “Physical exercise should be used in addition to any drug treatment, with the most benefit gained from aerobic exercises. Other body-based therapies, including tai chi and yoga, can be helpful, as well as regular stretching/strengthening exercises.”

Relaxation techniques also can help fibromyalgia patients learn skills that lessen pain, as can cognitive behavioral therapy. Complementary and alternative therapies such as acupuncture, chiropractic, and massage therapy also can be useful, although Dr. Witkin points out that such treatments have not been well-tested in fibromyalgia patients.

“While no cure exists for fibromyalgia, and [because] we are still learning a lot about causes and best treatments,” Dr. Witkin says, “education, lifestyle changes, and appropriate medication management by a specialist can help patients achieve significant improvement in symptoms and overall quality of life.”