Pumpkins mark the fall season with decorative flair on front porches and tabletops as well as in our favorite fall flavors—pumpkin spice has quite a following! It’s boosted pumpkin’s pizazz beyond pies and lattes to hummus, pasta, and even facial scrub. The most popular winter squash—pumpkin and pumpkin seeds—has a long and colorful history, beloved globally in traditional culinary traditions, starring in both sweet and savory dishes. Look beyond the bulbous orange variety to uncover a whole new arena of shapes, textures, colors, sizes, and flavors. Not only are they gorgeous and delicious, but they are also rich in powerful, health-protective plant compounds and nutrients. Invite pumpkins and pumpkin seeds of all varieties to your fall plate.

Is Pumpkin a Fruit or a Vegetable?

Oddly enough, pumpkin is a fruit, at least botanically speaking. Pumpkins and other members of the Cucurbita family of plants includes not only squashes, like pumpkin and gourds, but also watermelons, honeydew melons, and cucumbers. They all grow from a flower and have seeds in the middle, which technically makes them fruits. However, we categorize them as vegetables because they are less sweet and more savory from a culinary perspective. Pumpkins, like other winter squashes, are naturally roasted or stuffed and in a variety of savory dishes like soups, chilis, pasta, and casseroles.

There are hundreds of pumpkin varieties, so go ahead and enjoy the basic orange Halloween carving varieties, such as the Appalachian, but explore the many others. From a decorative perspective, they range from very large to tiny and come in myriad colors and textures, and shapes. Fun as a green, blue, or white turban shaped pumpkin may be in a centerpiece cornucopia, try a variety bred for cooking. Any pumpkin is edible, but you’ll find some are better suited to pumpkin pie, such as sugar pumpkins, which have a sweeter flesh. No matter which types you choose, the entire thing, minus the stalk, is edible: skin (mostly in smaller varieties), flesh, and seeds.

Pumpkin is Rich in Nutrients

Pumpkins are rich in carotenoids, the plant compounds responsible for the beautiful yellows, oranges, and red hues in squash and other fruits and vegetables. Those most notable include beta-carotene, a precursor to vision-protecting vitamin A, lutein, and zeaxanthin, which research suggests may help reduce the progression of age-related macular degeneration and cataracts, improve cognitive function, cardiovascular health, and help prevent some types of cancer. Winter squash, such as pumpkin, are also a good source of dietary fiber, vitamins A, B, and C, several minerals, and other elements including calcium, potassium, and zinc.

For centuries, pumpkins have been enjoyed as a part of the diet, but also used medicinally for its anti-inflammatory, antioxidant, antiviral, and antidiabetic properties. Research, which has been conducted on pumpkin peel, flesh, and seeds, for their health impacts, have demonstrated the above-mentioned properties as well as anticarcinogenic and antihypertensive. Studies have also linked pumpkin with brain health and treatment for depression, protection against liver disease, reduced risk of cardiovascular disease, and more.

Save the Seeds! Health Benefits of Pumpkin Seeds 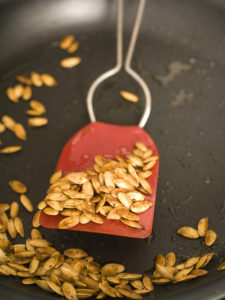 Pumpkin seeds can be roasted at home to eat as a healthy snack or a topping to salads. Pumpkin seeds contain healthy fats and omega-3s. ©Jupiterimages | Getty Images

All pumpkin and winter squash seeds are edible and have nutritional value. Made up of mostly healthy monounsaturated and polyunsaturated fats, including omega-3 fatty acids, and protein, pumpkin seeds (also known as pepitas) are healthy and satisfying as a snack or substitute for any seed you’d add to salads or other dishes. A one-ounce serving (about 85 seeds) contains 153 calories, 14 percent DV (DV=Daily Value, based on 2,000 calories/day) of protein, 18 percent DV of vitamin K, and several minerals, including iron, magnesium, and zinc.

Rather than tossing the seeds the next time you prepare pumpkin, here is how to roast pumpkin seeds at home.

Savory or sweet, pumpkin is easy to add into almost any recipe. You can buy canned pureed pumpkin, but it’s simple to bake or microwave at home and then puree in a blender or food processor. Use this in baked goods or pie, as well as soup or to boost mashed potatoes. Try roasting pumpkin slices or cubes just as you would butternut squash and enjoy a twist on flavor. Pumpkin makes a great stuffing or you can fill smaller varieties with a whole grain stuffing. 12 Fall Foods That Benefit Your Health, Inside and Out 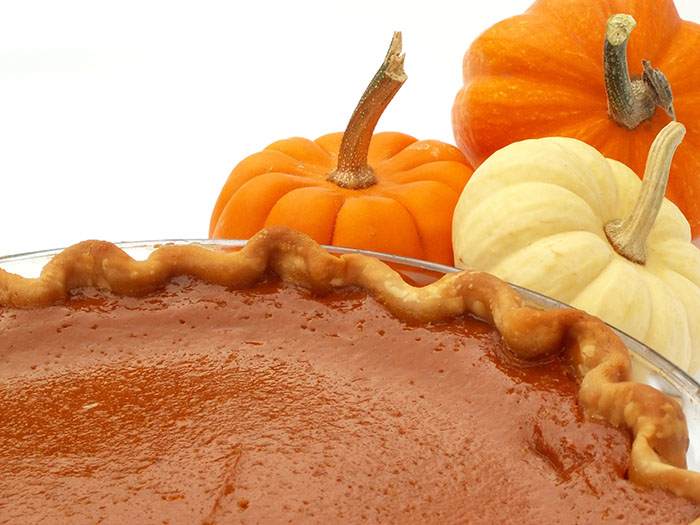