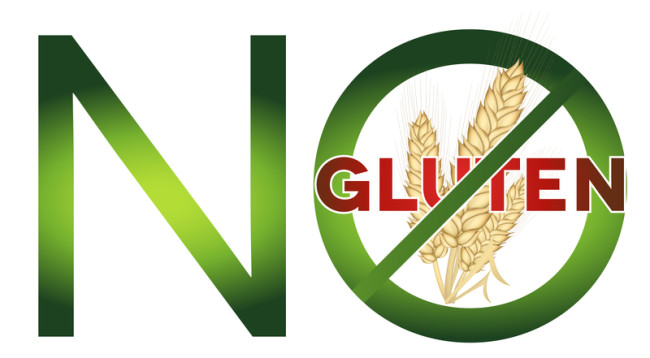 Maybe it started with an awareness when you were very young that certain foods—usually baked goods and pasta—left you feeling ill. Perhaps you developed a digestive intolerance later in life and you’re not sure how to handle it. Whatever the reason, you have come to the determination that you have gluten intolerance symptoms—or perhaps sensitivity to other food groups including diary, soy, or nuts.

Regardless of how you got here, University Health News’s series of targeted emails and free reports will help guide you to where you are going. First, you need to understand just what’s bothering you, starting with your gluten intolerance symptoms.

Celiac disease is a genetic autoimmune disorder that occurs when the body reacts abnormally to gluten, a protein found in wheat, rye, and barley. When people with celiac disease eat foods that contain gluten, an immune-mediated toxic reaction causes damage to their small intestine and to other systems in the body. Celiac disease affects about 1 in 133 people, an estimated 3 million Americans. Approximately 85 percent of these are thought to be undiagnosed.

Specialists now confirm that another portion of the population is affected by non-celiac gluten sensitivity. Individuals with gluten sensitivity experience symptoms similar to celiac disease but without the autoimmune reaction or the intestinal damage.

Although awareness of celiac disease in this country is increasing, at least one study reports that it can still take up to 11 years for some to be diagnosed. This may be due to the fact that celiac disease can present with a wide range of subtle to serious symptoms—from migraines to seizures, from diarrhea to dementia.

Also delaying diagnosis is the fact that many doctors still don’t think to suspect gluten sensitivity unless a patient has obvious gastro-intestinal complaints. Yet recent studies indicate only 30 percent of the people with gluten sensitivity have classic GI symptoms.

Celiac disease is a lifelong condition that cannot be outgrown. It is often present without obvious symptoms. If left untreated by the gluten-free diet, it continues to cause (more or less “silently”) intestinal damage and can lead to the development of conditions such as osteoporosis, infertility, and chronic anemia, as well as other related autoimmune disorders and even certain types of cancer.

Celiac disease was once considered a childhood condition that could be outgrown. Medical experts now know that celiac disease is a lifelong disorder that doesn’t occur just in childhood. New studies suggest it’s possible to develop celiac disease quite late in life.

When researchers from Finland screened a large group of adults over age 55 for celiac disease in 2002 and then again in 2005, they detected several new cases during the three-year interval. The gluten intolerance symptoms that subjects experienced revealed that the disorder can develop even in the elderly.

Similar results were reported in a study conducted in the United States by the University of Maryland Center for Celiac Research. The research revealed that as people in the study aged, the incidence of celiac disease increased.

Still unanswered is why a person would develop celiac disease at age 60, 70, 80, or even 90. There are theories on triggers, like changes in the intestinal bacteria, but these theories are not yet proven.

While younger patients are often able to experience intestinal healing quickly on a gluten-free diet, it may take longer for older adults. The dramatic turnarounds in health sometimes seen after diagnosis and adherence to the gluten-free diet—feeling like a new person overnight—aren’t typical for those diagnosed at an older age. The intestines simply heal more quickly in those who are younger. Little children may heal in weeks or months while older adults may take years to recover and some may not ever get fully back to normal. 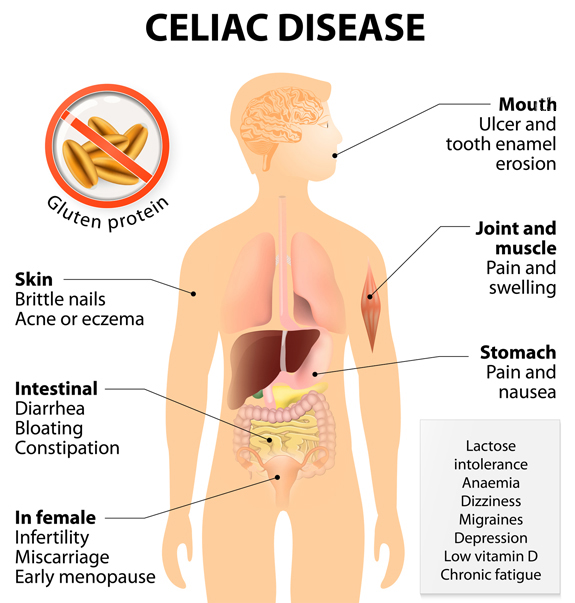 How does celiac disease affect us? As the chart here shows, it can wreak havoc on everything from the mouth to joint pain to intestinal and stomach issues to skin problems.

As with all autoimmune diseases, celiac disease is thought to involve a complex interaction of genetic and environmental factors. Thus far, two genetic markers—HLA-DQ2 and HLA-DQ8—have been associated with the condition. Ninety-nine percent of those with celiac disease have one of these genetic markers. (Note that many people who don’t have celiac disease also have these markers.)

Researchers are actively trying to identify other genes that are also implicated in the onset of celiac disease, and the list of genes is growing every year. It is thought, however, that their role is minor compared with the HLA-DQ2 and HLA-DQ8 markers.

Besides gluten, additional environmental factors may contribute to the onset of celiac disease. A particular event can activate, or “turn on,” the condition. Sometimes celiac disease is triggered—or becomes active for the first time—after stressful events, like surgery, pregnancy, childbirth, viral infection, or severe emotional stress.

Infection may be a substantial trigger for celiac disease. Over the years, infections have been studied in connection with the onset of a variety of autoimmune conditions, including type 1 diabetes and rheumatoid arthritis.

When a report in medical literature noted the symptomatic onset of celiac disease following a confirmed case of Campylobacter jejuni enteritis (traveler’s diarrhea), it was among the first to suggest that an environmental factor other than gluten—in this case, an infection—could be important to the onset of symptomatic celiac disease.

Just how an infection might precipitate celiac disease or celiac symptoms is unclear, however. One theory is that repeated infections chronically stimulate the immune system, which may, in turn, trigger an autoimmune reaction in genetically susceptible people. Another theory is that a mechanism known as molecular mimicry is to blame. Here, a foreign protein, such as an infectious bacteria or virus, tricks the body into attacking its own cells.

Click here for our guide on tests and screenings for people with celiac disease and gluten intolerance symptoms. It’s free to registered users at University Health News.