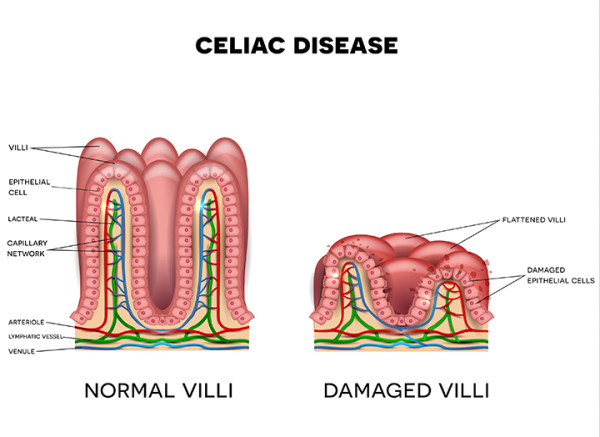 Celiac disease is a genetic autoimmune disorder that occurs when the body reacts abnormally to gluten, a protein found in wheat, rye and barley. When people with celiac disease eat foods that contain gluten, an immune-mediated toxic reaction causes damage to their small intestine as well as to other systems in the body. Celiac disease affects about 1 in 133 people, an estimated 3 million Americans. Approximately 85 percent of these are thought to be undiagnosed.

Specialists now confirm that another portion of the population is affected by non-celiac gluten sensitivity. Individuals with gluten sensitivity symptoms experience reactions similar to celiac disease but without the autoimmune reaction or the intestinal damage.

Celiac disease is a lifelong condition that cannot be outgrown. It is often present without obvious symptoms. If left untreated by the gluten-free diet, it continues to cause (more or less “silently”) intestinal damage and can lead to the development of conditions such as osteoporosis, infertility, and chronic anemia, as well as other related autoimmune disorders and even certain types of cancer.

Without healthy villi, nutrients are not properly absorbed and a person becomes malnourished, no matter how much food he eats. This leads to nutritional deficiencies and related health problems and symptoms. Children with celiac disease typically have gastrointestinal symptoms, such as abdominal bloating, chronic diarrhea, weight loss, and failure to thrive.

While adults can have digestive symptoms, too, those symptoms are seen somewhat less frequently. In adults, reactions to gluten more often include anemia, arthritis, and osteoporosis, among a long list of others.

The European Society of Paediatric Gastroenterology, Hepatology, and Nutrition recently revised the definition of celiac disease to recognize that it is an immune-mediated systemic disorder, which can affect more than just the gastrointestinal system. Symptoms associated with the disease can reach far beyond the digestive tract.

The incidence of celiac disease has increased fourfold in the past 50 years. Researchers are uncertain as to why this is the case, although the prevailing theory is that the reduced exposure of the intestines to environmental antigens during the first few months of life may contribute to a deranged development of the intestinal immune system that favors the subsequent loss of tolerance to gluten.