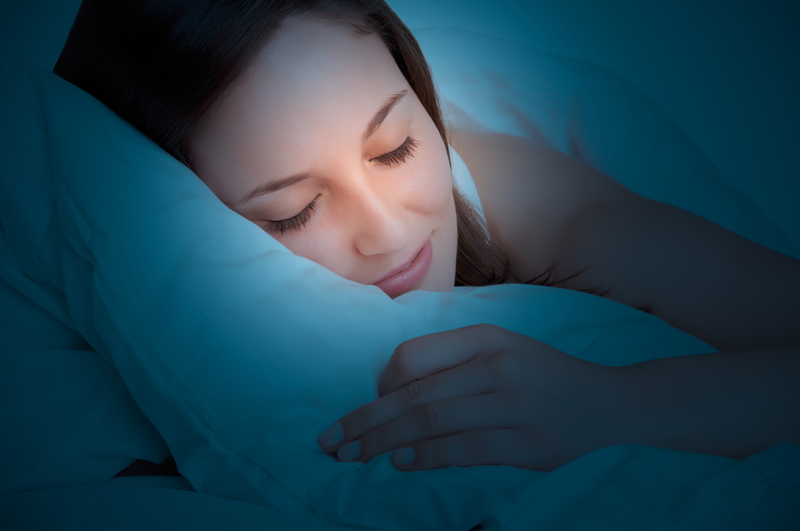 Our cycle of slumber involves four distinct sleep stages, the deepest of which is REM (rapid eye movement) sleep.

One-third of all American adults are not getting enough sleep, according to the Centers for Disease Control and Prevention. But why does it matter so much? Well, simply put: Inadequate sleep is bad for your health. It’s linked to chronic conditions and illnesses like diabetes, obesity, heart disease, and depression. It is also linked to accidents and poor performance at work—not to mention the effect that being sleep-deprived and grumpy can have on relationships. The secret to why sleep is so important for health lies in the sleep cycle—our sleep stages.

As we sleep, our brain and body enter a remarkably complex and healing biological state. According to experts at the National Sleep Foundation, there are “two types of sleep: rapid eye movement (REM) sleep and non-REM (NREM) sleep.”

Within NREM sleep there are four distinct stages. These have been studied extensively using electroencephalogram (EEG), which shows that brain activity is quite different in each of the stages.

Stage 1 is the stage between being sleep and being awake. Sleep is light and easily interrupted. It occurs as you fall asleep and during brief periods of arousal during sleep. There is a slow-down in brain and muscle activity.

Some people experience a falling sensation accompanied by sudden muscle jerks during stage 1. (See also our post “Is Twitching While Sleeping a Problem? Here’s How to Treat Sleep Myoclonus.”)

Stage 2 is the first stage of true sleep but it is still light. Your heart rate and breathing slow down, and you start to become unaware of your surroundings. Brain wave activity slows further, with accompanying sudden rapid bursts of activity called “sleep spindles,” during which muscles become relaxed. 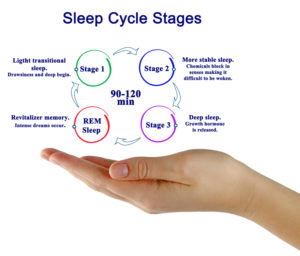 Stages 3 and 4 of NREM Sleep

Breathing and heart rate slow down, eyes are still, blood pressure drops, and muscles relax. If someone were to try to rouse you now, you’d have a hard time awakening and would feel groggy and disoriented. This stage has been associated with tissue regeneration and the release of essential hormones (such as growth hormones).

Dreaming occurs in REM (Rapid Eye Movement) sleep, when your limbs are paralyzed but your eyes dart back and forth behind closed eyelids. Your blood pressure increases, and your heart rate and breathing speed up to daytime levels. There is intense brain activity, with brain waves that are fast and irregular (desynchronized).

REM sleep is the most important stage of sleep for memory. Besides dreaming during REM sleep, you also process and consolidate new information you’ve learned.

Sleep Architecture: How Much Sleep Do We Need?

So what is the ideal pattern of sleep? Each sleep cycle lasts on average of 90 to 110 minutes and is repeated four to six times per night. Early in the night, the cycle is shorter.

For a healthy adult:

Sleep architecture varies over a lifespan. Newborns spend about 50 percent of their sleep in REM, while in young children, deep NREM (stages 3 and 4) sleep is longer. In elderly people, deep sleep reduces, while stages 1 and 2 increase. Sleep is more easily disturbed in the elderly but for most people, contrary to popular belief, the need for sleep does not decline.

In a 2014 Ted Talk program, neuroscience researcher Jeff Illiff presented mind-blowing research on how the brain deals with its “waste.” He explained that researchers were astonished to find that when we sleep, channels open up around the blood vessels in the brain. These channels flush the brain with cerebrospinal fluid (CSF), which effectively cleans the brain, taking away the waste products from normal metabolism.

When you’re not getting enough sleep, or if your quality of sleep is poor, all of the positive things that happen in sleep—as described above—decrease. Your body is unable to repair effectively, biological processes are disturbed, and there are significant effects on brain function and cognition.

Lack of quality sleep can impact: