Home » Daily » Sleep » Why Am I Having Hypnagogic Hallucinations? 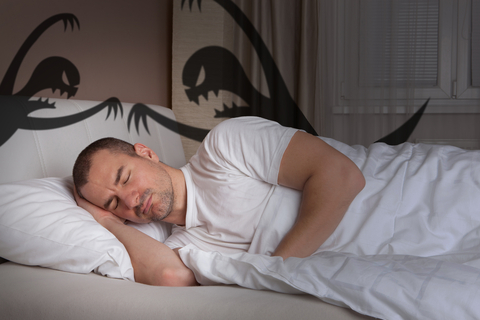 Vivid nightime visions during your sleep may be what’s known as hypnagogic hallucinations.

Do you ever have wild visions or dreams that are extremely vivid and seem like real life just as you’re falling asleep? You may be experiencing hypnagogic hallucinations, a condition often associated with narcolepsy. In fact, hypnagogic hallucinations are among the four most common narcolepsy symptoms, along with sleep paralysis, daytime sleepiness, and cataplexy—a sudden loss of muscle tone and control while awake.

Hypnagogic Hallucinations: “So Strange and So Real”

Hypnagogic refers to the transition between being wakefulness and sleep. It’s that drowsy feeling you have just as you’re falling asleep. You may be somewhat aware of your surroundings during this period. You may even have mild dream-like thoughts. But hypnagogic hallucinations are much different. They tend to seem very “lifelike” and have a strong sensory component. You’ll see, hear and feel things as though you were fully awake.

When you awake from a typical dream, you usually know that you were dreaming. And even if you had a disturbing dream or nightmare, you can chalk it up to a bad dream and get on with your day.

Q: Is there any type of sleep paralysis treatment that helps people who experience these events, and if so, what does it consist of?

A: Sleep paralysis (SP) is a condition in which individuals awaken in the midst of vivid dreams that occur during the rapid eye movement (REM) stage of sleep and find themselves physically immobilized and unable to breathe normally. The frightening experience usually occurs when falling asleep or waking up, and ends after a minute or two. It is not dangerous, but it may sometimes involve hallucinations and can be very disturbing. If you experience these events regularly, feel anxious about going to sleep, or find that you are very sleepy during the daytime, consider seeing a health care provider for assessment. SP treatment varies from patient to patient, depending on factors such as the frequency of the SP events, your sleep patterns, and your medical and psychological history. Treatment usually involves adjusting your sleep routine to ensure proper sleep hygiene (such as making sure your sleep environment is cool, dark, and comfortable; keeping a regular sleep/wake schedule; and avoiding big meals, caffeine, exercise, alcohol, stimulating activities, or “screen time” on computers, smart phones, etc. close to bedtime). Learning to use meditation to promote relaxation, especially during SP attacks, can also be effective. In some cases an antidepressant such as clomipramine may be prescribed for its ability to alter REM sleep.

But if you have hypnagogic hallucinations, you may have a harder time separating them from reality. Because they’re often so strange and seem so real, they can leave you feeling afraid and confused because the contents of the hallucinations made no sense.

Narcolepsy and Other Causes

The causes of narcolepsy aren’t well understood. The most well-known narcolepsy symptoms include sudden, unexpected naps of a few seconds or much longer. But hypnagogic hallucinations and sleep paralysis are also trademark signs of the condition. Sleep paralysis sometimes accompanies hypnagogic hallucinations, and it is characterized by an inability to move or speak as you fall asleep. These two narcolepsy symptoms can be the two most upsetting because they make you feel especially vulnerable and powerless.

If you have no other narcolepsy symptoms, the cause of your hypnagogic hallucinations may be due to stress, insomnia, or drug or alcohol use. Tricyclic antidepressants have been associated with hypnagogic hallucinations, but these medications have been replaced to a great extent by other drugs, such as selective serotonin reuptake inhibitors (SSRIs).

But illicit drugs and excessive alcohol consumption can produce hallucinations. If you (or a loved one) appears to have a problem with drugs or alcohol, seek help from your physician or a treatment program in your community. The health risks to you and those around you include much more than vivid and disturbing dreams.

If stress or anxiety may be at the root of your hypnagogic hallucinations, you should also consult with your doctor or a mental health professional. Techniques in stress relief and therapy to help you cope with anxiety may be able to put an end to bedtime hallucinations and other symptoms.

If hypnagogic hallucinations occur infrequently and don’t disturb your sleep, no treatment may be necessary. But if they’re a cause of great stress or occur on a regular basis, then by all means seek help.

But understand that hypnagogic hallucinations are not signs of mental illness. It is this fear or misunderstanding that keeps some people from discussing such episodes. If your doctor doesn’t seem knowledgeable or equipped to deal with your concerns, seek out a sleep specialist. You may be advised to avoid bed until you become very sleepy. Sometimes lying awake and worrying about possible hallucinations can make the situation worse.

These hallucinations are common, and with treatment for underlying causes, they may disappear on their own. In addition, while hypnagogic hallucinations tend to develop first in young people, as you age, however, your chances of experiencing these visions declines.

Vivid sleep-related hallucinations usually take one of two forms: hypnogogic or hypnopompic. Unlike standard dreams that often have a story (even if it doesn’t make much sense when you’re recounting it), hypnogogic and hypnopompic hallucinations usually don’t have much of a linear narrative. They are usually just sensations, sometimes so strong that you may feel you’re smelling or hearing something unusual, as well as seeing it.

Hypnogogic hallucinations occur as you’re falling asleep ,and sometimes happen simultaneously with sleep paralysis. You may also experience sleep paralysis as you wake up.

A British publication, Journal of Psychiatry, recently covered a survey about dreams and hallucinations that revealed some interesting results. More than 5,000 people responded. According to the results, about 40 percent of the respondents said they’d had hypnogogic hallucinations, while only about 12 percent said they’d had hypnopompic visions. Researchers suggest that hallucinations upon waking were common in people with sleep disorders. If you tend to experience these visions, tell your doctor.

Of course, if you have any type of sleep-related hallucination, it’s not a guarantee that you have a sleep disorder. Hallucinations aren’t a sign of mental illness, either. Worries about how hallucinations will sound to a doctor may keep some people from reporting them. But you shouldn’t worry; they’re fairly common. And if sharing hypnopompic hallucinations or hypnogogic hallucinations helps lead to the diagnosis and treatment of a sleep problem, then consider this your wake-up call.