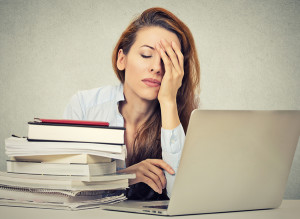 If you can't sleep at night--and can't seem to stay awake during the day, you may be on the verge of narcolepsy, a disorder characterized by sudden sleep regardless of your surroundings.

The term “narcolepsy” may conjure up almost comical images of someone falling asleep in the middle of a conversation. But this sleeping disorder is no laughing matter to those who struggle with it. Narcolepsy symptoms include more than excessive daytime sleepiness (EDS). They include bouts of muscle weakness (cataplexy) and loss of muscle control, as well as nighttime sleeping problems.

Narcolepsy is a brain disorder in which an individual can’t manage his or her sleep-wake cycles. It affects men and women equally, and lasts a lifetime. Narcolepsy symptoms usually first appear during childhood; however, they can show up for the first time in adulthood, too. The National Institute of Neurological Disorders and Stroke reports that about one in 3,000 Americans have narcolepsy, but the institute also suggests that many more people may have the condition but have not been properly diagnosed.

Unfortunately, the cause or causes of narcolepsy are not well understood. It doesn’t appear to have a genetic component, but researchers have discovered that many people with narcolepsy have low levels of the brain chemical hypocretin. The chemical helps the body manage wakefulness and REM sleep—the sleep stage in which vivid dreams occur.

EDS is among the most common narcolepsy symptoms, affecting about 70 percent of people with the condition. Unlike the sleepiness you might feel after a restless night’s sleep or a couple of late nights in a row, EDS is more serious concern. It affects your everyday activities over a long period of time. EDS can leave you feeling less mentally sharp, physically fatigued, and often depressed. You may have memory problems and trouble concentrating.

The best-known narcolepsy symptoms, however, are those quick, involuntary naps. They often last only a few seconds, but they can occur while you’re still engaged in some activity. You may be writing a letter, folding clothes, or even driving. You may not even be aware of what you did while you nodded off. If you were writing, the evidence may just be a scribble on the paper instead of your usual handwriting. If you were driving, the results of even the briefest of narcolepsy-induced naps could be tragic.

While most narcolepsy symptoms are related to sleeping, waking, or mental function, one major sign appears to have nothing to do with a major sleeping disorder. Cataplexy is the unexpected loss of muscle tone and voluntary muscle control while you’re awake.

You can have a sudden episode of cataplexy any time while you’re awake. Usually such an episode appears after EDS symptoms are present. But for some people with narcolepsy, cataplexy attacks may develop before any sleeping issues are evident. This can result in a misdiagnosis, as the episodes may resemble seizures.

In some cases, the loss of muscle control is nothing more than drooping eyelids. In the most serious situations, cataplexy can leave you collapsed on the floor, seemingly unable to be awakened. But in reality, an individual in the middle of a cataplexy attack is probably awake, but unable to speak or open his or her eyes.

Interestingly, laughter is one of the most common triggers for an episode of cataplexy. The episodes can occur without a trigger, but they typically occur during moments of stress, anxiety or excitement.

If you recognize narcolepsy symptoms in yourself or a loved one, you should share these signs with a doctor. If a description of your symptoms suggests narcolepsy, your physician may refer you to a sleep specialist.

Evaluating your condition usually starts with a detailed accounting of your sleep history: when symptoms began, how you sleep at night, what your daytime symptoms are, other medical conditions you man have, and what medications you take.

You may also be asked to fill out the Eworth Sleepiness Scale, a questionnaire designed to measure the degree of your daytime sleepiness symptoms. Your other homework may include a daily (and nightly) sleep log, in which you will keep a diary of your sleeping and waking activities for a week or two.

During this time you may be instructed to wear an actigraph, a wristwatch-like device that measures roughly the time spent awake and asleep. It’s not as accurate as an actual sleep test, but that must be done at a sleep center.

The official name of this sleep tests is polysomnography, which uses electrodes on your body to measure the electrical activity in the brain and heart. The equipment also measures the movement of your eyes and muscles, as well as your breathing.

Another common test administered when narcolepsy symptoms are present is a multiple sleep latency test. This is also done in a sleep center, but it’s done during the day. You’ll be told to take a few naps during the day, each one about two hours apart. Sleep specialists will note how long it takes you to fall asleep and enter REM stage.

Unfortunately, narcolepsy cannot be cured. A combination of healthy lifestyle changes and medications, however, can help control narcolepsy symptoms.

Medications to help treat the condition include stimulants, such as modafinil (Provigil). Methylphenidate (Ritalin, Concerta), usually used to treat attention deficit hyperactive disorder (ADHD), may be better for some people with narcolepsy, though it can produce nervousness as a side effect.

Other drugs, including antidepressants, may also be recommended. However, it’s important to discuss with your doctor what drugs should be avoided. For instance, cold medicines that can cause drowsiness may not be safe if you have narcolepsy.

As for lifestyle adjustments, some of the same advice that goes for people dealing with insomnia is also appropriate for those with narcolepsy. Strategies such as sticking to a regular bedtime/wake-up schedule every day may be beneficial. Likewise, getting regular exercise may give you more energy during the day and help you sleep more soundly at night. Quitting smoking and avoiding alcohol is also good advice for narcoleptics.

Individuals with narcolepsy tend to feel better after a nap, whether it was voluntary or involuntary. But the idea of taking daytime naps should be discussed with a physician. If you can strategically schedule naps of 20 minutes (or longer if possible or if necessary), you may find that feelings of daytime sleepiness are significantly reduced. Of course, those naps should work around school, a job, or other responsibilities.

Narcolepsy can be a huge challenge in your life. But consulting with a sleep specialist and making changes in your lifestyle may help you live with the condition without major problems. The Americans with Disabilities Act, for example, makes it clear that employers must make accommodations for people with narcolepsy.

If you suffer from narcolepsy, get educated, discuss treatment options with your physician, and look for a support network in your community or online. There is help available if you make the effort to seek it out.