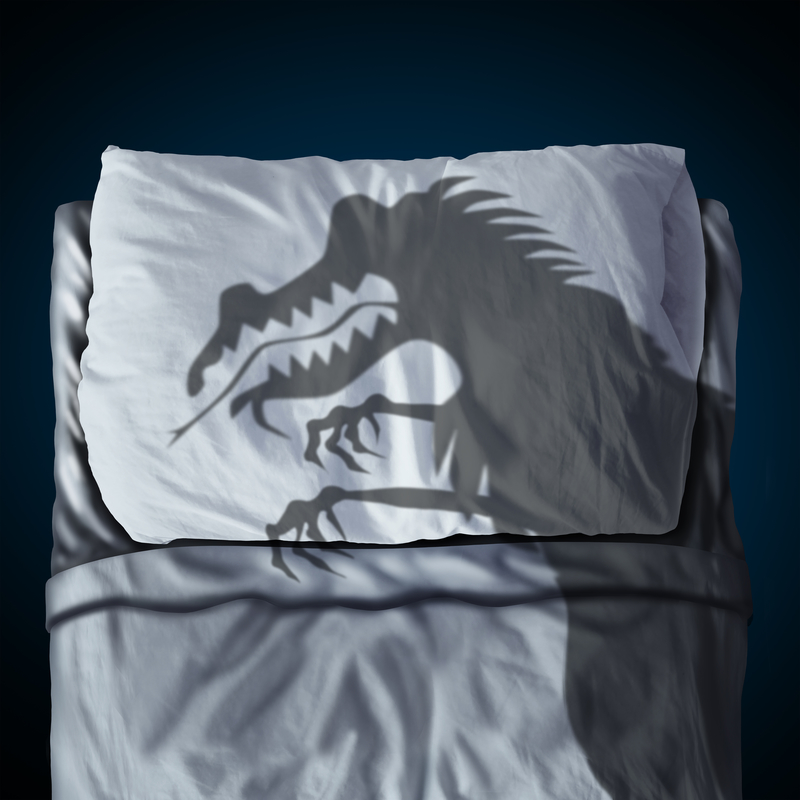 Nightmares begin occurring in most people before the age of 10. They’re normal unless they significantly interfere with sleep, development, or psychosocial development. What causes nightmares? Triggers are often correctable—especially in the cases of pre-bedtime eating habits and medications.

You may remember, as a kid, occasionally waking up in a cold sweat, startled out of your slumber by one of those frighteningly vivid nightmares. Perhaps the experience still pops up from time to time; bad dreams may be more common in children, but adults aren’t immune to them. Around 85 percent of adults report having at least one nightmare in the past year, while 8 to 29 percent of us have monthly nightmares. Either way, those startling dreams beg the question, “What causes nightmares?”

It would help to understand what nightmares are. Unfortunately, there’s more mystery than quantifiable fact surrounding nightmares. For now, here’s what we do know about these “stories” that play out in our minds while we sleep: They’re “lengthy, elaborate dreams with imagery that evokes fear, anxiety, or sadness,” as Psychology Today puts it. “The dreamer may wake up to avoid the perceived danger.”

Nightmares are unique to each of us, they’re personal, and they’re so fleeting that we often don’t remember much about them. And there are any number of factors that trigger them. What causes nightmares for you, however, may not have the slightest effect on anyone else.

HOW COMMON ARE NIGHTMARES?

While nightmares can be disturbing for a child, they’re a normal part of our development. And we don’t necessarily outgrow them. According to Sleep.org, some 50 percent of adults experience nightmares.

So what causes nightmares? Here are seven common triggers:

The Academy of Sleep Medicine describes nightmares as “recurrent episodes of awakening from sleep with recall of intensely disturbing dream mentation, usually involving fear or anxiety, but also anger, sadness, disgust, and other dysphoric emotions.”

If you’re worried that nightmares are a warning of some sort, relax. Don’t take them literally. In nightmares, we feel like we have no control over the imaginary scenes that are playing out, but they’re just that: imaginary. However, they do often reflect fears or obsessions.

According to Dreams.co.uk, the 10 most common bad dream themes are:

Are Nightmares Bad for Our Health? The Surprising Answer

If nightmares are recurrent enough, they can develop into what’s known as “nightmare disorder.” The Diagnostic and Statistical Manual of Disorders defines nightmare disorder as “repeated awakenings with recollection of terrifying dreams, usually involving threats to survival, safety, or physical integrity.”

Nightmares aren’t the same as night terrors. The latter condition, more common in children, is characterized by screaming, thrashing, and panic. For more, see our post “What Are Night Terrors?”

Fortunately, nightmare disorder is rare. However, there’s no doubt that recurring nightmares also may cause fatigue. We may have difficulty falling back asleep after nightmares because of their disturbing nature. In a classic domino effect, the fatigue can carry over into our work performance and/or interfere with family or social life.

But there’s a flip side: Research also shows that bad dreams actually may be helpful in getting us to move beyond a traumatic event. Nightmares can serve as an emotional release from anxiety that may be weighing on our minds; in fact, they’re normal reactions to stress we’ve been experiencing. “We think nightmares are so common that they have some purpose to process stressors,” Anne Germain, director of the Sleep and Chronobiology Center at the University of Pittsburgh, told CNN in 2017.

Being haunted even by traumatic events may be helpful, research shows, and experts think they could actually be beneficial. “Nightmares in the first few weeks after a traumatic event have not been associated with health problems,” reported CNN’s Carinna Storrs.

One study illustrates that more than 20 percent of women who were victims of sexual or physical assault were experiencing nightmares about the event three months later. Another study shows that survivors of serious car and motorcycle accidents also were having nightmares months later.