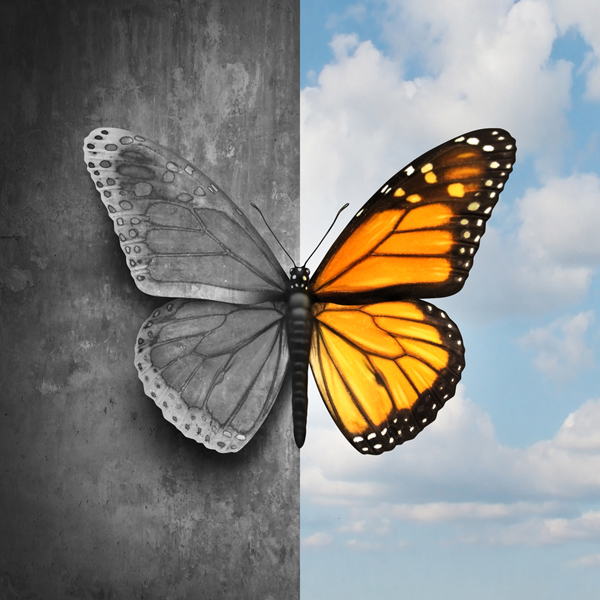 What causes bipolar disorder? It appears to result from a combination of factors that involve genetic makeup and an individual's environment, both past and present.

Bipolar disorder is a mental health condition in which people experience periods of low mood (depression) interspersed with excessively high or even agitated or psychotic moods (mania or hypomania). But what causes bipolar disorder?

Of course, people suffering from untreated bipolar disorder may struggle to provide a safe and stable home for their children.

Environment May Be Part of What Causes Bipolar Disorder

Unsafe and unstable environments have been shown to increase the risk of developing a mental illness, which may explain, at least partially, the link between parents and children with bipolar disorder. However, environment doesn’t tell the whole story.

For one thing, even people with bipolar disorder who are being treated and are responding and functioning well have children at increased risk for the disorder. Furthermore, studies have shown that when one out of a pair of identical twins develops bipolar disorder, the likelihood that the other will eventually also be diagnosed with the condition is increased by 40 to 70 percent.

Bipolar disorder is considered to be fundamentally a biological condition related to dysfunction or imbalances in the brain. While this is true for regular depression as well, psychological factors seem to play a greater role in depression than in bipolar disorder. For instance, while someone with fairly mild depression often responds well to psychotherapy and may not need any other treatment, science generally recognizes that bipolar disorder cannot be effectively treated with psychotherapy alone (although therapy certainly may be helpful).

With a bipolar condition, there’s likely an underlying disorder in brain that in need of correction, usually with medication or brain stimulation therapies such as electroconvulsive therapy (ECT). As with depression, imaging studies show differences in the brains of people with bipolar disorder compared with people who have no mental health issues.

That said, the environment has been shown to play a role in the development of bipolar disorder.

What Causes Bipolar Disorder? These Factors May Contribute

As with regular depression, certain environmental factors appear to be able to trigger the condition. There are differences, however. It would seem that only the most resilient people escape feeling some amount of depression in the face of daunting life circumstances. So, for instance, it would be understandable if a young woman became depressed after suddenly losing her fiancé in a car accident. Even without any risk factors for depression, one can imagine a person in such a situation struggling for years and possibly needing the help of psychotherapy or medication to get back on her feet again.

It would be less typical for such a tragic event to trigger an episode of bipolar disorder unless the person already had some kind of genetic or biological risk factors (perhaps previously unrecognized) for the condition. By comparison, a person who is vulnerable to the condition and is raised in an abusive or neglectful home may be more likely to develop bipolar disorder than someone with a similar biologic vulnerability who was raised in a stable, nurturing home.

Again, though, not all of the questions about how environment and biology interact to produce bipolar disorder have been answered. Certainly, children from loving, stable homes can grow up to have bipolar disorder—even when they have no family members with the condition or any other known vulnerabilities.

Drug abuse and alcohol abuse are also believed to potentially trigger bipolar disorder in those with an underlying susceptibility to the condition. They also can worsen the depressive episodes associated with the condition and make recovery more difficult. Some experts have speculated that the hormonal changes associated with adolescence also can trigger bipolar disorder; it’s around this time of life that people with the condition often experience their first significant symptoms.

Certain medications are known to trigger episodes of mania in people with underlying bipolar disorder. Antidepressants comprise one such type of medication. In fact, there have been cases where people with bipolar disorder were diagnosed as having regular depression and, thus, given an antidepressant. It’s only after the drug induces a state of mania or hypomania for the first time that a true diagnosis is uncovered.

Other stimulant drugs can also trigger manic episodes in vulnerable individuals (as can repeated or prolonged periods without adequate sleep). If you have a family history of bipolar disorder, your doctor may advise you against using certain drugs or medications known to potentially induce manic episodes.