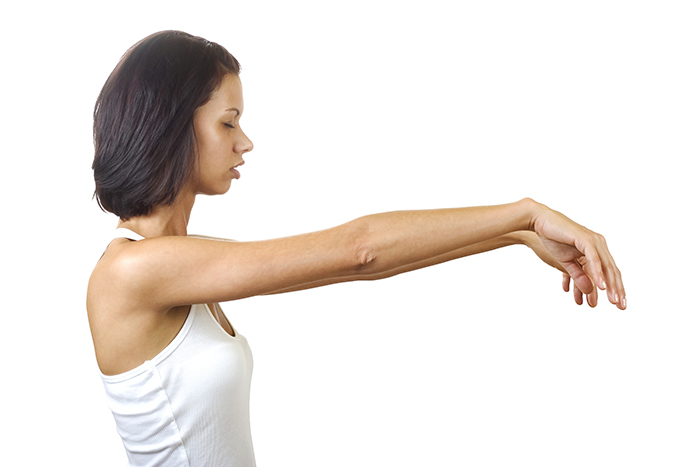 A recent study strong supports that the tendency to sleepwalk is hereditary, passed from parent to child through some as-yet-unidentified gene.

If you’re a fan of TV sitcoms, you’ve probably seen an episode (or two) where a main character gets out of bed in the middle of the night, walks in a stupor to the kitchen, and makes a midnight snack without even opening his (or her) eyes. While such a scenario can be humorous on television, sleepwalking may not be funny to the millions of people who experience it each year. For some, sleepwalking can be quite disturbing, while others might not even realize it’s happening to them.

Also known as somnambulism, sleepwalking occurs during slow wave sleep (also called NREM sleep) and often occurs along with night terrors. It can last for several minutes or longer and is generally more common in children than adults. Someone who’s sleepwalking may get out of bed, walk around, and perform routine activities, but may not respond to or communicate with others. Yet if you’re a sleepwalker, “you might talk or shout as you are walking,” according to SleepEducation.org, and “your eyes are usually open and have a confused, ‘glassy’ look to them.”

Once an episode has ended, the sleepwalker may quickly return to sleep with little or no memory of the experience in the morning.

Normally, sleepwalking isn’t associated with any specific psychiatric or psychological condition, but it can be triggered by sleep deprivation, stress, depression, anxiety, alcohol, certain medications, and fever. Also, any underlying condition that affects sleep can sometimes trigger sleepwalking; among them are sleep apnea, restless leg syndrome, narcolepsy, and migraines.

Your doctor or sleep specialist will likely ask you to describe any symptoms you’ve experienced, provide a list of all medications, and keep a sleep diary for a week or two prior to your initial appointment. He or she will also ask you details of your family history as well as any recent major events that may have affected your sleep pattern.

These details will help your doctor plan a course of action to relieve your symptoms. While specific treatments for sleepwalking are few and far between, your doctor might treat any underlying conditions that trigger the episodes. You might be instructed to avoid caffeine and/or alcohol before bed, schedule additional time for sleep, and/or change your medications.

If you or a loved one experiences sleepwalking on an occasional basis, it usually isn’t a cause for concern. In rare cases, however, the person who is sleepwalking may leave the house, attempt to drive a car, injure himself, or become violent. These are all signs that a doctor should be consulted immediately. You should also seek help if:

Parents should consult a pediatrician if a child’s sleepwalking continues into his or her teen years.While you or your loved one receive treatment, it’s important to take precautions to avoid injury. Depending on how severe the episodes are, it may be necessary to lock windows and doors, clear rooms and hallways of clutter, keep car keys out of reach, and lock up dangerous weapons.

If you’re dealing with a child, install safety gates outside of his or her room and also at the top of the stairs. And don’t let a sleepwalking child sleep in a bunk bed.

How to Approach a Sleepwalker

Probably the first question you’ll want to ask a doctor when dealing with a sleepwalker is, “Should I wake him up?” The answer is no.

Trying to awaken someone who’s sleepwalking might cause him to become agitated. It’s best to attempt to gently guide the sleepwalker back to bed, according to experts, although sleepwalkers may eventually return to bed on their own. If a sleepwalker attempts to leave the house, harm themselves or others, or gets repeatedly injured, consult a doctor as soon as possible.