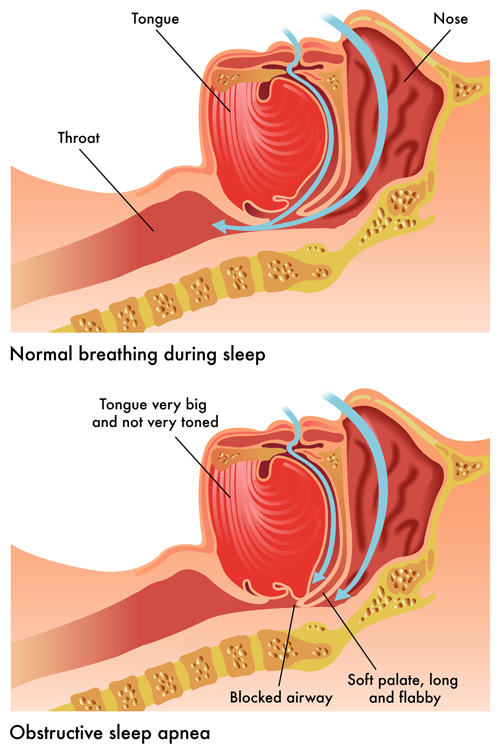 The diagram above shows how the upper airway is blocked during obstructive sleep apnea.

If you recall waking up as a child and hearing one of your parents snoring on the other side of the house, you’d be justified wondering whether you were hearing sleep apnea symptoms. In fact, your snoring parent may never have pursued a formal diagnosis of obstructive sleep apnea (OSA). But if there was consistent snoring and gasping for breath—typical sleep apnea symptoms—there’s a good chance sleep apnea was the culprit.

Fortunately, we have a few tests that not only can diagnose sleep apnea, but that can measure the seriousness of your condition. Here, we take a look at the most common sleep apnea tests and how they work.

What happens at a sleep study? You’ll likely spend the night in a sleep lab for a sleep apnea test to assess the number and severity of apneas. You’ll undergo a sleep study test called polysomnography that records a variety of bodily functions, including brain waves, to detect the various stages of sleep, muscle activity, eye movements, heart rate, breathing, air flow, and blood-oxygen levels.

The number of breathing events per hour of sleep related to apnea or hypopnea—and the degree of low blood oxygen and reduced airflow—determine the diagnosis and severity of OSA.

Guidelines from the American Academy of Sleep Medicine (AASM) state that a home sleep test, which involves the use of a portable monitoring system, is appropriate for certain individuals in getting to the bottom of sleep apnea symptoms.

The patient wears the monitoring system during sleep in his own bed. The unit consists of a small recording device, sensors, belts, and related cables and accessories. Adults between the ages of 18 and 65 who have a high probability of moderate-to-severe OSA and no other medical conditions are most likely to benefit from the home test.

In the future, it may be easier to make a diagnosis of obstructive sleep apnea in coming up with sleep apnea cures. Emerging research shows that analyzing a person’s breathing sounds while awake could quickly and accurately screen for OSA.

In one study, 35 subjects were instructed to breathe through their nose at their normal breathing level for at least five breaths and then breathe at their maximum flow level for another five breaths. Then the process was repeated as they breathed through their mouth with a nose clip in place. A microphone placed over the neck picked up the breathing sounds, and several sound features of breathing were statistically significant between participants with OSA and controls.

In an analysis that combined the two most significant sound features, the presence or absence of OSA was predicted with more than 84 percent accuracy. Sound analysis also allowed for the stratification of OSA severity.