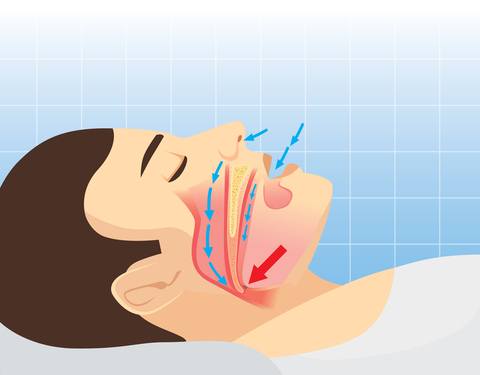 Obstructive sleep apnea (OSA) occurs when breathing is interrupted when the upper airway is blocked by the collapse of excess soft tissue in the back of the mouth during sleep.

Many suffer from it, but most don’t know what causes sleep apnea. The most common form is obstructive sleep apnea (OSA), which occurs when breathing is interrupted when the upper airway is blocked by the collapse of excess soft tissue in the back of the mouth during sleep. The effect is like trying to drink through a wet paper straw: You keep sucking on it, but nothing gets through. Some of that tissue is muscle that supports the tonsils, uvula, tongue and walls of the throat.

Each individual’s throat and nose anatomy is different. What causes sleep apnea for one person may not result in sleep apnea symptoms for someone else. You may just have large tonsils that relax and partially cover your airway when you lie down. Or you may simply have been born with a narrow throat. Being older and being male both increase the chances of developing sleep apnea. Nasal polyps may also block the airway.

What causes sleep apnea for some people is their lifestyle. Drinking alcohol or taking sleep medications can cause the muscles in the throat to relax too much. Smoking may also contribute to your sleep apnea symptoms. Smoking can cause inflammation in the throat and a buildup of mucus, both of which can cause a narrowing or blockage of the airway.

If your sleep apnea symptoms appear only when you’re congested, you may not need to take any major steps other than to try to clear up your congestion. A head cold or allergies—anything that makes it difficult to breathe through your nose—can be what causes sleep apnea for you in the short term.

Regardless of how often you experience sleep apnea, you should get it checked out. On any given night:

These frequent arousals or awakenings keep you from getting the deep, continuous, restorative sleep you need, leading to excessive daytime sleepiness. The frequent blockages in breathing lower blood oxygen levels, elevate nighttime blood pressure, and cause heart rhythm disturbances.

Research suggests that a sedentary lifestyle—notably, prolonged daytime sitting or standing—may contribute to the severity of OSA. Even when the sedentary lifestyle does not lead to obesity, it may still lead to OSA and other associated health risks.

It could be that overnight fluid displacement from the legs, related to prolonged sitting, may be a cause of OSA. This may help explain why 40 percent of patients with OSA are not obese, and why a reduction in OSA has been described when people begin exercise programs, even when they don’t lose weight.