Home » Daily » Eyes, Ears, Nose & Throat » Nasal Polyps: What Are They, and Which Treatments Are Most Effective? 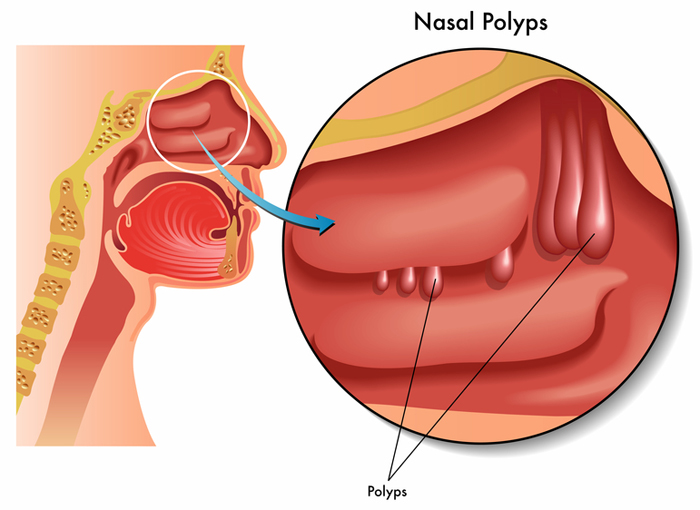 How do you know whether you have nasal polyps? They can affect your breathing and your sleep and cause a persistent runny nose, problems with your sense of smell and/or taste, and headaches, among other symptoms discussed here.

Nasal polyps are benign, soft-tissue lesions in the nose or sinuses. These grape-like swellings of the mucous membrane (mucosa) that lines the airways can cause unpleasant nasal symptoms or airway obstruction. Many people are unaware, in the early stages, that they have them. Nasal polyps affect up to 4 percent of adults, and are usually associated with asthma, allergies, and other inflammatory diseases of the airways.

Researchers are still looking to understand the full picture of nasal polyps, but they seem to result from an inflammatory process. Sometimes they run in families, and they’re more common in men. Most people who get polyps are over the age of 40.

Most at risk are people with:

Nasal polyps are uncommon in children. When they do occur, the child may need to have a more thorough evaluation to rule out a foreign body in the nose, asthma, allergies, primary ciliary dyskinesia, or cystic fibrosis.

How do you know if you have polyps in your nose? With small polyps, the individual may be unaware or have very mild symptoms. As polyps grow or multiply, they can begin to cause unpleasant symptoms.

Typically, symptoms may include these nine afflictions:

Here are the different ways your physician may diagnose nasal polyps:

In children with significant polyps, a sweat test (for cystic biopsy) and a ciliary biopsy (for primary ciliary dyskinesia) may also be needed. (Cilia are the tiny hairs in the lungs and the nose.)

Medical treatment of nasal polyps will vary. Typically, though, treatment begins with a nasal corticosteroid spray; some people may need a short course of oral steroids, such as prednisolone. Very rarely—in cases of in severe airway obstruction, for example—intravenous or subcutaneous (under skin) steroid injections are needed. If the underlying condition is known, it should be treated, or the polyps may return.

Examples of nasal steroids include fluticasone (Flonase), mometasone (Nasonex), budesonide (Rhinocort), flunisolide, and triamcinolone (Nasacort). As for which nasal spray is best for nasal polyps, that comes down to trial and error and personal preference.

Another possible option: nasal polyps removal. When polyps are large or don’t respond to steroids, surgery may be necessary. Usually, it’s done on an outpatient basis using a thin endoscope; a hospital stay isn’t typically required. Surgery tends to be less effective in people with asthma or aspirin sensitivity.

As for children with multiple benign nasal polyps, if medical treatment fails, surgery may provide temporary relief, but the recurrence rate is high. More extensive surgery to remove more of the mucous membrane has a higher success rate, but an increased risk of complications.