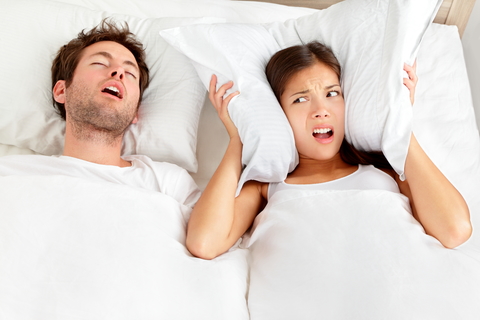 Obstructive sleep apnea is the most common sleep-related breathing disorder.

Obstructive sleep apnea is the most common sleep-related breathing disorder, affecting 3 percent to 7 percent of the population. In obstructive sleep apnea, the airway narrows and/or collapses, and individuals stop breathing for brief, repeated periods throughout the night. This causes reductions in the body’s oxygen levels and disrupts normal sleep cycles. People with sleep apnea usually snore loudly and partners may witness “apnea” episodes which often interrupt the snoring and end with a snort.

While “excessive daytime sleepiness” is the most common of the sleep apnea symptoms studied by researchers, it is not necessarily as significant as the general lack of energy and fatigue. When sleep apnea patients were asked to choose their most significant symptom in one study, 40 percent of patients chose lack of energy, compared with 22 percent for sleepiness. This means one of the best ways to detect true sleep apnea is to assess energy levels during waking hours.

Other daytime sleep apnea symptoms include:

These problems, combined with lack of daytime energy, puts sleep apnea sufferers at a significantly higher risk of having difficulties at work or school and of having a motor vehicle accident.

Being tired would be bad enough, but there is a strong association between obstructive sleep apnea and diabetes, obesity, and cardiovascular disease. Sleep apnea directly increases the risk for having high blood pressure, cardiac arrhythmias, and stroke. Untreated sleep apnea is also associated with increases in insulin resistance, GERD, cognitive difficulties, and overall risk of death.

The most common and effective conventional treatment for obstructive sleep apnea symptoms is continuous positive airway pressure (CPAP), which provides a steady stream of air through a mask that is worn during sleep. This airflow keeps the airway open to prevent pauses in breathing and restore normal oxygen levels. Patients will often report feeling dramatically better after beginning treatment.

Studies show that treatment with CPAP reduces excessive daytime fatigue, and increases energy. A randomized controlled trial in 2011 specifically looked at fatigue and found that three weeks of CPAP therapy significantly reduced fatigue scores to the point that participants were no longer suffering from clinically significant levels of fatigue after the three-week intervention period. Self-reported energy levels also increased significantly.

Some individuals simply cannot tolerate CPAP as a sleep apnea treatment option because of nasal congestion and the pressure felt because of the high flow of air created by the device. Other conventional sleep apnea solutions include surgery or a sleep apnea mouth guard, known as “mandibular advancement devices” or splints.

Oral appliances, which hold the mandible in a protruded position during sleep, are increasingly used for mild to moderate sleep apnea symptoms, as well as in more severe patients who are unable to tolerate or refuse CPAP. Although oral devices generally do not work as well as CPAP in reducing the actual number of episodes and increasing oxygen, they do help with sleep apnea symptoms and increase energy in sleep apnea patients. Studies have found that overall improvements and outcomes seem comparable with both types of treatment.

If sleep apnea is suspected, it is imperative to get diagnosed and treated, given the severe health risks associated with this disorder. If sleep apnea treatment is not working, there are more options. Additional sleep apnea remedies are available. Here are four sleep apnea cures without CPAP:

Natural remedies for sleep apnea symptoms center on healthy foods, exercise, and weight loss (if needed). Studies show individuals with sleep apnea who have obesity may no longer require CPAP when they lose weight, and may even experience a total cure of their sleep apnea and fatigue. In one study, for instance, a 12-week weight-loss program based on diet and exercise was shown to significantly decrease daytime sleepiness and fatigue in patients with obstructive sleep apnea. (Read about green tea for weight loss here.)

Exercising four times a week by doing something moderately aerobic for about 40 minutes, following by some weight training two days a week, also has been shown to significantly improve sleep apnea and the feeling of being tired all the time, even if you do not lose weight.

Aside from diet and exercise, natural remedies for sleep apnea should focus on increasing antioxidant capacity. Why? Sleep apnea is associated with oxidative stress, the excessive build-up of free radicals. It is also associated with decreased antioxidant capacity (ability of the body to counter oxidative stress) and decreased blood levels of various antioxidants, such as vitamin E and carotenoids (such as beta-carotene).

The excessive oxidative stress associated with sleep apnea then leads to what is known as “endothelial dysfunction,” in which the blood vessels do not properly relax and contract. Endothelial dysfunction is the primary mechanism causing atherosclerosis, heart disease, heart attacks, and strokes. Various types of antioxidant supplements have been researched as treatments and found to be beneficial as natural remedies for sleep apnea.

The three most researched antioxidants are vitamins C and E, and the compound n-acetyl-cysteine (NAC). Taking an antioxidant formula containing these compounds along with mixed carotenoids may be beneficial.

Another supplement that may be helpful for those with sleep apnea symptoms is an omega-3, such as fish oil especially one which has been formulated to by highly concentrated in the omega-3 fatty acid DHA.

Low omega-three levels, especially DHA levels, are related to more severe sleep apnea (higher apnea-hypopnea indices). Omega-3 fats are one of the top natural remedies for sleep apnea because they protect cells against stress; sleep apnea causes long-term oxidative stress and puts severe demands on the body which is thought to deplete the omega-three levels.

Vitamin D levels have been found to be lower in patients with sleep apnea compared to those without the disorder.

Treatment with vitamin D may help ameliorate the blood sugar disturbances and inflammation associated with insulin resistance in sleep apnea patients. Even if there is not poor blood sugar metabolism, it is strongly recommended  to ensure vitamin D levels are optimal by taking at least 2000 IU of vitamin D daily and having blood levels checked yearly. This is because vitamin D deficiency is so common and linked to so many sleep apnea symptoms, including mood disturbances and muscle pain. Many patients report relief from feeling so tired all the time when their vitamin D levels are optimally treated.

This article was originally published in 2013 and is regularly updated.