Home » Daily » Bones & Joints » How Do You Know If You Have a Hip Fracture? 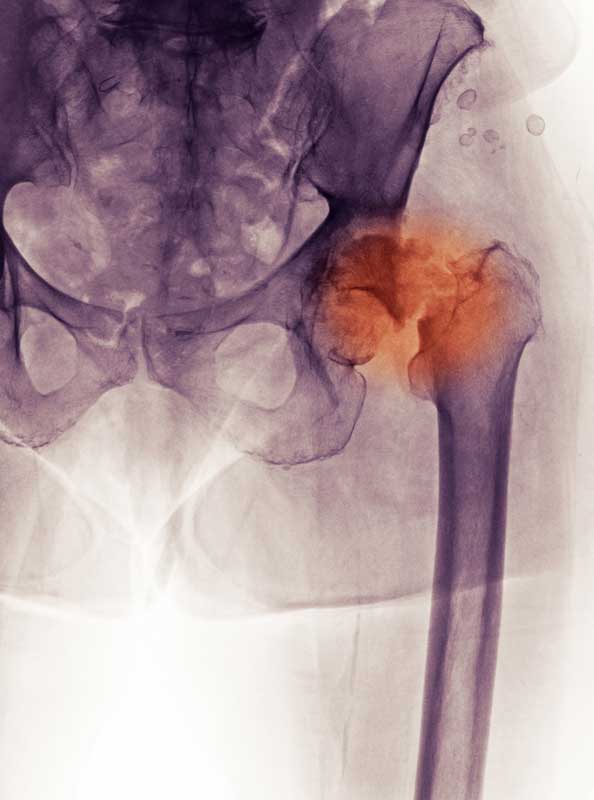 Other than medications to relieve pain, surgery is usually the only treatment recommended for a hip fracture, unless another pressing medical condition would delay or prohibit it.

The formula to determine the probability of a hip fracture is as simple as it is accurate: Age + weakened bones + a fall = hip fracture. And 75 percent of falls are experienced by women.

Ninety-five percent of hip fractures are caused by falls (usually sideways, says the Centers for Disease Control and Prevention), and one out of four people over the age of 65 experience at least one fall each year. Less than half of them tell their doctor.

A blow to the hip can also cause a fracture, as can (in people with already weak bones) simply standing on the affected leg and twisting.

Unless something is done about it, there is a natural loss of bone density and muscle mass as we age. Medications like cortisone, which is used to relieve hip pain and reduce inflammation, can weaken bones if taken for extended periods of time. So can a chronically overactive thyroid.

The Mayo Clinic says that calcium and vitamin D deficiencies at younger ages increase the risk of hip fractures later in life.

People at risk for hip fractures may have a current vitamin D deficiency, lower body weakness, difficulties with balance or walking, vision problems, foot pain or poor footwear, a history of taking sedatives, tranquilizers, or antidepressants, and hazards at home that can cause falls.

Hip Fracture: By the Numbers

66 Percent of people who experience fall, then fall again within six months

75 Percent of all falls experienced by women

95 Percent of fractures in older adults caused by falling

If you have any of these symptoms, see your doctor or get to a hospital as soon as possible:

If you have hip pain but have not fallen, there is a high probability (95 percent) that something else is causing the discomfort. Even when that is the case, it’s important to see a doctor immediately to get an accurate diagnosis.

Other than medications to relieve pain, surgery is usually the only treatment recommended for a hip fracture, unless another pressing medical condition would delay or prohibit it.

If your hip is broken, surgery within 24 hours of admission or less might be recommended. A study at McMaster University in Montreal found that the speed of surgery following diagnosis of a hip fracture had a significant impact on outcomes among patients 45 and older (Canadian Medical Association Journal).

The type of surgery depends on age, severity of the fracture, level of mobility before surgery, and underlying health conditions. In about half of cases, says Britain’s National Health Service, a partial or total hip replacement is performed.

A partial hip replacement removes and replaces the ball of the hip joint. It does not replace the socket. In total hip replacement, both are removed, either by traditional or minimally invasive procedures. In other cases, internal repair of the hip is possible with screws, plates, or rods.

Prevention of hip fractures begins with prevention of falls. At least one-third among older adults involve hazards at home. Two-thirds of those who fall will fall again within six months, but as many as one-third of all falls are preventable. Below are some things you can do.

With Your Lifestyle and Diet

Regardless of age, gender, and bone health, falls are not inevitable. There are ways to lower your risk of falling and breaking a hip, but each person has to take the initiative. The way to increase your risk is to do nothing.