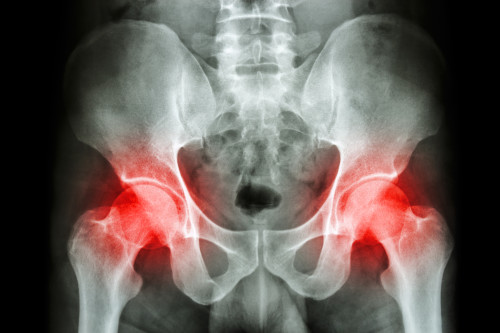 If you’ve been experiencing chronic hip pain, you’ve no doubt considered hip replacement. It could be your best solution.

The goal of total hip replacement is to replace the worn surfaces of the ball-and-socket joint. Typically, the upper head of the femur is replaced by a metal ball mounted on a metal stem that is placed firmly into the canal of the thighbone. The worn hip socket—once a source of consistent hip pain—is replaced with a metal cup that, in turn, is fitted with a plastic insert. It is against this plastic insert that the metal ball rotates as you move. Ideally, this insert is made of a material that has a low frictional resistance and wear rate against the metal ball.

Why Hip Implants Wear Out

Unfortunately, the liner used in most hip inserts, though made of high-density plastic (polyethylene), still degrades over time. Not only does the plastic liner wear, but it also sheds tiny particles. These particles find their way to the spot where the implant is anchored into the bone, and can cause more hip pain and irritation.

The body reacts to this irritation by trying to remove the particles and, in the process (known as osteolysis), it removes a little bit of bone as well, slowly loosening the implant. Over time, this erosion creates the need to surgically revise the implant. These revision surgeries are more difficult than the original, and their success is more limited.

Although this wear and tear is most often the cause of prosthetic joint complications, studies have found that dislocation and infection are other common reasons why the implants fail.

The pursuit of a longer-lasting hip prosthesis prompted renewed interest in devices employing a cobalt-chrome head bearing against a smooth metal pelvic cup. Proponents say these metal-on-metal implants improve the durability of hip replacements, cut down on debris, provide better range of motion, and allow for larger femoral heads, which may reduce the risk of dislocation.

But research has found a higher failure rate among some metal-on-metal designs, as metal particles from the implants can trigger adverse reactions in the hips of some patients. The FDA reports that in rare cases, metallic ions entering the bloodstream may have caused illness elsewhere. In general, metal-on-metal implants are not recommended for women of childbearing age, and for patients who have kidney problems, are on high-dose corticosteroid therapy, have a known allergy/sensitivity to metals, or have a suppressed immune system.

While traditional total hip replacement requires an incision that is, on average, 10 to 12 inches long, the incision for a minimally invasive (a.k.a. “mini-hip”) replacement is approximately three to four inches in length. This is often enough to enable the surgeon to see the ends of your femur and the cup, or acetabular, part of your pelvis.

Just because a hip replacement is performed through a smaller incision doesn’t necessarily make it less invasive. Some surgeons offer a “mini-incision” approach, but they end up essentially doing traditional surgery through a smaller opening.

To be truly minimally invasive, a surgeon must not only make a smaller incision, but must also reduce the number of underlying muscles and tendons cut. Rather than sever (and eventually suture back) many of these muscles and tendons that connect to the head of the femur, in a minimally invasive approach, the surgeon cuts away only a few of these tissues, and works around or between the remaining muscle bundles to position the implant.

In a newer approach to total hip replacement, called minimally invasive direct anterior surgery, the surgeon places the hip prosthesis through a four- to six-inch incision at the front of the hip instead of at the side or the back (posterior). The procedure spares the muscles and tendons around the hip, and it doesn’t require the array of precautions that patients must take after conventional hip replacement.

Proponents say the anterior approach has several advantages over traditional surgery, including less pain and a need for less pain medicine, shorter hospital stays, a quicker recovery, and fewer postoperative restrictions. And, unlike conventional hip replacement, the anterior approach can be done with the guidance of intraoperative fluoroscopy, which provides real-time X-ray images of the hip.

Unlike total hip replacement, which removes the head and neck of the femur and replaces them with a metal ball and stem, hip resurfacing keeps the neck intact and resurfaces and reshapes the head, covering it with a metal cap. Both procedures require a cup to be placed in the hip socket (acetabulum).

On the Positive Side

Surgeons who perform the procedure claim it allows for greater range of motion than total hip replacement and preserves the normal hip mechanics, and they may recommend it for younger, more active patients who still have healthy bone stock.

On the Negative Side

As with metal-on-metal total hip replacements, wearing of the metal-on-metal hip resurfacing system may produce metallic ions that causes hip pain in the form of synovitis (inflammation of the hip joint lining), and may eventually lead to loosening and failure of the device.

What concerns U.S. surgeons most is that with resurfacing, there is a risk of fracturing the femoral neck, which is left intact and is usually the weakest part of the natural hip joint. Such a risk doesn’t exist with total hip replacement because the neck is replaced with metal. Approximately 1 to 2 percent of those who have hip resurfacing will have such a fracture, usually within four months of surgery.