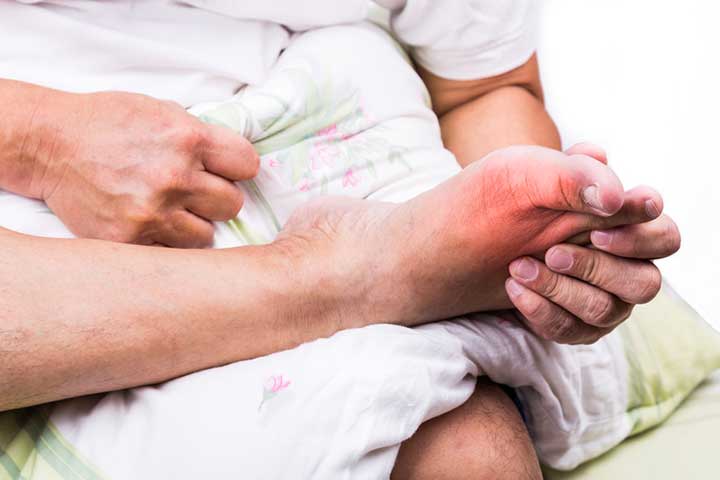 Gout indirectly affects, or is affected by, multiple systems of the body.

Most people associate gout with pain in the big toe, but this extremely painful type of arthritis can affect other parts of the body, too. Gout in ankles, hands, knees, and other joints might be less common but it warrants treatment just the same.

Gout is caused by excessive amounts of uric acid and the needle-like crystal deposits that are left behind. The increase in uric acid happens because too much is being produced or because the kidneys cannot efficiently remove it from the body.

Gout in Ankles and Other Joints = Excruciating Pain

The pain of a gout episode can be excruciating during the first few hours, but the discomfort subsides with or without treatment in five to 15 days. Although the pain goes away, the attacks come back within a year in most people. Others may not experience a flare for years.

Other symptoms include swelling, redness, and limited range of motion. If not treated, the urate crystals can form under the skin in your hands, feet, elbows, and the back of your ankles, and become tender during bouts.

Gout occurs in men 85 percent of the time, but the rate in women, especially after menopause, is rising.

Men are more likely to have gout in ankles, knees, and feet. Women experience it more in their knees and toes, as well as in their wrists and ends of their fingers. Because it’s a condition more often associated with men, gout in women is often misdiagnosed as rheumatoid arthritis.

Gout: By the Numbers

1 One in four people with gout has a family history of gout.

10 Percent of gout patients who get ongoing treatment.

85 Percent of gout cases that affect men, although the rate among women is increasing.

Gout indirectly affects, or is affected by, multiple systems of the body. It is linked to these conditions:

Certain types of beverages, foods, and medications can’t directly cause gout, but they can raise the level of uric acid. These include shellfish, red meats, alcohol in excess, and drinks/foods high in sugar content. Medications include low-dose aspirin, certain diuretics (Esidrix Hydro-D), and immunosuppressants used in organ transplants such as cyclosporine (Neoral, Sandimmune).

Primary gout is the most common form, and those who have it usually show a family history of gout. It develops between the ages of 30 and 60.

Secondary gout occurs as a result of long-term treatment with diuretics. It is usually found in patients 65 and older, and is often associated with osteoarthritis.

NSAIDs (non-steroidal anti-inflammatory drugs) might relieve pain and swelling if taken early in an episode of gout. Other medications are corticosteroids injected or taken orally, cochicine, and a variety of drugs for reducing uric acid levels, including allopurinol, febuxostat, probenecid, lesinurad, and pegloticase.

Two recent studies show that the combination of diet and medications could delay, minimize, or even prevent an attack. Both address the causes of gout rather than its symptoms.

A BMJ (formerly titled British Medical Journal) study published in May 2017 found that the DASH diet (Dietary Approaches to Stop Hypertension) is associated with a lower risk of gout. Researchers used food frequency questionnaires of more than 44,000 men to classify those who followed a DASH diet and those who chose a predominantly Western diet.

A DASH diet is high in vegetables, nuts, legumes, low-fat dairy products, and whole grains. The Western diet, on the other hand, is based on high intake of red and processed meats, French fries, refined grains, sweets, and desserts.

In November 2017, the American Academy of Family Physicians issued a position statement based on more than 8,000 medical records. The statement said that managing gout with medications on a long-term basis as a chronic disease could help prevent recurrences and associated doctor visits.

There is not a cure for gout, but managing the condition is possible. For starters, patients have to make the decision to more closely follow DASH diet guidelines. Physicians can be more proactive in treating gout as a chronic condition requiring frequent monitoring rather than treating it as a series of isolated but inevitable episodes.

Combining the two approaches should give gout patients a positive outlook on taking control of gout in ankles, hands, wrists, toes, and any other joint.