Home » Daily » Bones & Joints » Bone Fracture: Who’s Vulnerable? And How Can You Lower Your Risk? 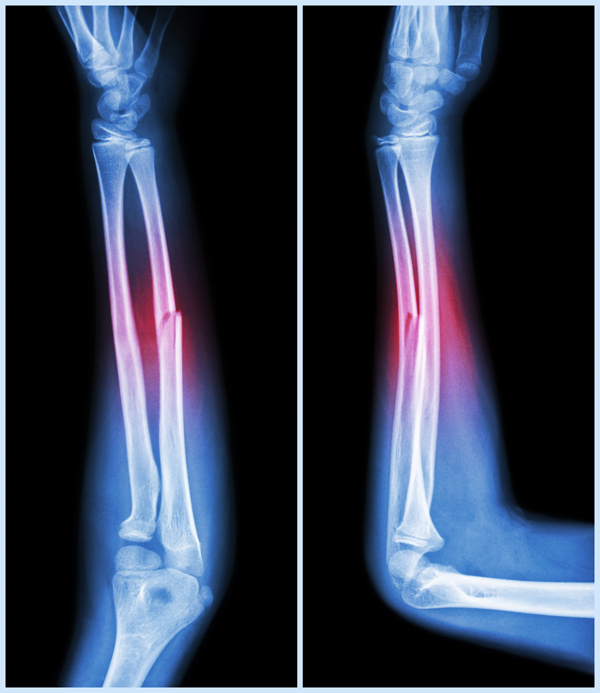 The x-rays above show two views of a bone fracture—specifically, the shaft of the ulnar (forearms) bone.

The likelihood of experiencing a bone fracture or break is alarmingly high. American Bone Health says that half of all women and 25 percent of men over the age of 50 will have a fracture in their lifetime. The likelihood of breaking a bone continues to increase with age.

What happens when a bone is fractured? We know that what doctors call a fracture is a broken bone, but there is more to it than that. There are different causes of broken bones and different kinds of fractures when it happens.

Bones are strong, but there is a limit to how much force they can withstand. When too much stress is put on a bone, it breaks—not necessarily into two parts, but enough of a break to change the shape of the bone. The older we get, the less force our bones can withstand. Here are just a few of the ways the medical community categorizes broken bones.

There are other, more technical, terms that doctors use to describe broken bones—transverse, spiral, oblique, impacted, comminuted, compression, for example—but they are not ones often needed or used by the public.

The exact causes of bone fractures are a lot easier to recognize and understand than the broken bone categories (see sidebar). The three main causes of fractures, according to the American Academy of Orthopaedic Surgeons (AAOS) are trauma, overuse, and osteoporosis.

A fragility fracture, according to the University of Michigan, is any fall from a standing height or less that results in a fracture. Our bodies should be able to sustain a fall from this height without a fracture unless there is an underlying cause that makes the bones fragile. The most common areas involved include the hip, spine, and wrist.

The first fracture is a warning sign. It should result in immediate screening and, if indicated, management and treatment for osteoporosis.

What Are the Symptoms of a Broken Bone?

It depends on the bone broken, but these symptoms are apparent in most fractures.

How Are Broken Bones Diagnosed?

The most common diagnostic tool used for fractures is an x-ray image. It can show the doctor where the fracture is located, its type, and severity. Magnetic resonance imaging (MRI) might be needed for stress fractures and smaller bone breaks. Even less frequently, bone scans or computed tomography are used.

How Are Broken Bones Treated?

The body is very good at repairing itself. If doctors can get bones back to their normal alignment, healing moves along relatively fast.

How Long Does it Take to Recover from a Broken Bone?

If a child suffers a broken bone, it typically heals quickly—perhaps in a few weeks. For older adults, it could take several months. The average time is six to eight weeks.

How Can You Lower the Risk of a Fracture?

Calcium and vitamin D are necessary to promote bone strength. How much calcium?

How much vitamin D?

Tobacco slows the process in which cells create new bone tissue. The bones of people who smoke become thinner and more fragile over time. (See our post Quit Smoking: 6 Steps to Success.)

Broken bones are common injuries, and the risk increases with aging. They are painful at first, but immensely treatable. With proper treatment and rehabilitation, you should expect full recovery.