Home » Daily » Stress & Anxiety » Feeling “Hangry”? It’s Real, So Steer Clear of the Hungry-Angry Among Us 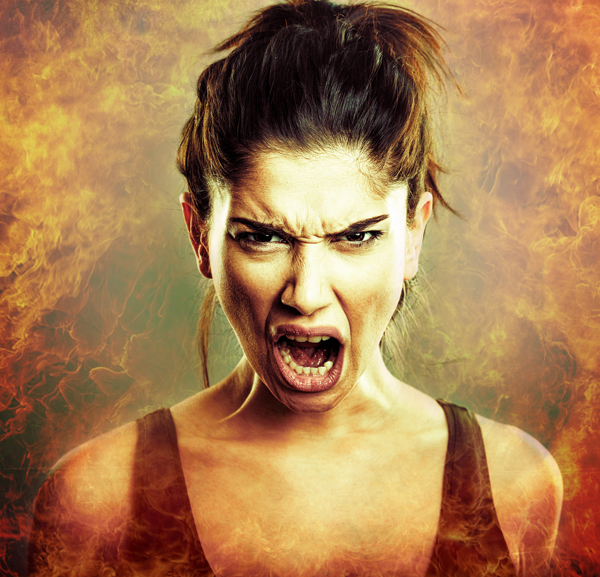 Got that irritable feeling where you're hungry and angry at the same time? You're hangry, but there are ways to address it—and ways to prevent it.

Two days before I was assigned this story, my husband demanded that I eat breakfast. He’s not usually one to tell me to do something (he learned 22 years ago that ordering me around doesn’t end well). In this case, however, he knew it was in our family’s best interest to feed me. I’d cut carbs from my diet two weeks prior to his royal proclamation, and my mood (and family) were paying the price. I’d become hangry—irritable, impulsive, and overall cranky to anyone who crossed my path. I needed carbs, and I needed them soon.

Luckily for my marriage (and the mental health of our two children), I ate a big, healthy breakfast and soon felt my “hanger” dissipate. My family breathed a collective sigh of relief over their pancakes.

Normally, I consider myself to be a rational person. It takes a lot to irk me, so I was surprised by how quickly I flew off the handle while I was in a food-deprived state. That got me wondering: What does it mean to be hangry? What causes this condition, and is there a way to prevent hunger from ruling our emotions? Here’s what I learned.

What Does Hangry Mean?

Officially added to the Oxford English Dictionary this February (and also counted as a real word at Merriam-Webster), the hangry definition is as you’d expect: “Bad-tempered or irritable as a result of hunger.” Sound familiar?

It’s safe to say the majority of us know the feeling. “Usually we get ‘hangry’ because there is blood sugar instability or a severe drop in blood glucose levels, which some health practitioners refer to as ‘reactive hypoglycemia,’” says Rochelle Sirota, a New-York based Certified Dietitian-Nutritionist. Research has proven that having low blood sugar can lead to aggression.

But what about other emotions—such as frustration, irritability, or anxiety? According to Jennifer MacCormack, M.A., a lead researcher of several studies about the science of being hangry, biological changes caused by hunger (e.g., increased levels of cortisol and adrenaline, which can cause rapid heart rate and increased blood pressure) play a key role in triggering emotions. “Hunger is literally generating a very basic emotional feeling of being negative or unpleasant and tense,” she explains.

In general, MacCormack says, hunger by itself doesn’t make a person emotional. If someone who’s hungry is exposed to a negative or unpleasant situation while feeling negative, he is more likely to become “hangry” and blame his anger on outside sources or factors.

On the other hand, someone who is hungry, happy, and exposed to a positive or neutral situation is more likely to recognize hunger as the culprit of any feelings of unease. Thus, she’ll more likely reach for a snack—and then deal with a situation calmly.

“This temporary lack of awareness leads us to misattribute or blame our feelings on something in the environment, rather than on the fact that we are just hungry,” she explains.

The take-home: Being emotionally aware can prevent you from becoming hangry and lashing out at those around you.

What Are the Effects of Being Hangry?

In addition to the obvious—becoming irritable, cranky, and tearing into any passerby—being hangry can cause other, more serious conditions.

According to Sirota, having low blood sugar, a side effect of being hungry, can cause people to feel lightheaded, weak, argumentative, and depressed, and it can lead to headaches and an inability to focus. While eating sweet or starchy foods can raise blood sugar levels, she says, over time, this condition can “feed into the problem, contributing to a downward spiral of repeated low blood sugar hypoglycemia incidence.”

In addition to these physical issues, being hangry can also cause us to view the world in a negative light, making us feel more upset, overwhelmed, or anxious than normal, says MacCormack. “Similarly, if we’re feeling more overwhelmed, frustrated, or upset—and we’re not aware in that moment that hunger is ‘biasing’ us… we may be more likely to act on those feelings—to be rude, hurtful, or lash out.”

The result: We could hurt and damage our relationships with friends, family members or colleagues.

Can Being Hangry Affect Us Negatively in the Long-Term?

Possibly, says MacCormack. “Although I don’t think feeling hangry from time to time can have long term physical effects… It’s possible that the anger or stress we experience when hangry, if we experience them every day for many years, could have downstream health consequences.”

Is There a Cure for Being Hangry?

Feed yourself! “The treatment for preventing hangriness involves consuming balanced meals (and perhaps snacks, too) well spaced throughout the day,” suggests Sirota.

Laura Hartung, MA, RD, LDN, CPT, echoes that sentiment: “Eat at least two to three meals per day with one to three snacks in between to keep your blood sugar stable. Don’t go more than four hours without eating.”

And don’t reach for junk foods—they can raise your blood sugar rapidly, causing it to crash shortly after and make you crave even more high-calorie, high-sugar treats, Hartung says.

Can I Prevent That Hangry Feeling?

“Prepare or despair,” Hartung warns. “Planning your meals and snacks in advance is the key to avoiding going down the hangry path.” Practicing intuitive eating (munching on what you want when your body tells you it’s hungry) could also help you avoid becoming hangry and teach you to be more mindful of what you’re putting in your body and when. (See our post Intuitive Eating: A Healthy and Effective Way to Lose Weight.)

Another tip: Become emotionally aware. “If you can catch yourself becoming hangry—your awareness may be enough to put you back in the driver seat and help you avoid acting on that hunger,” says MacCormack. Meditate, get a good night’s sleep, try a few stress-relief strategies, and exercise regularly to promote relaxation. If anger is an issue, read our post Anger Management: 15 Ways to Tame Your Temper. Still struggling emotionally? Seek help from a professional.

HANGER MAY BE SEASONAL

Although we’re likely to be hangry throughout the year, we may be more susceptible to feeling this way seasonally for different reasons, according to Jennifer MacCormack, M.A. For example, it’s no surprise that we feel more irritable when it’s hot, she says. “That’s another example of the way our physical states can subtly impact our emotions and perceptions of the world around us.”

So, if we’re feeling hungry and hot, sticky, and uncomfortable during the summer, we may be more prone to becoming hangry—especially if we aren’t paying attention to our feelings.

Another reason for the change in hangriness levels: our diet. In the summer, MacCormack says, people tend to eat more fresh, healthy foods, while in the winter months we’re more prone to carb- and sugar-loading. The result: a quicker blood sugar crash in the winter, which destabilizes our blood sugar and can lead us to feel more hangry.

Eating a healthier diet with more protein and veggies throughout the year may go a long way to help prevent us from becoming hangry.