Home » Daily » Pain » Anaplasmosis: Tick-Borne Disease Is Gearing Up and On the Rise 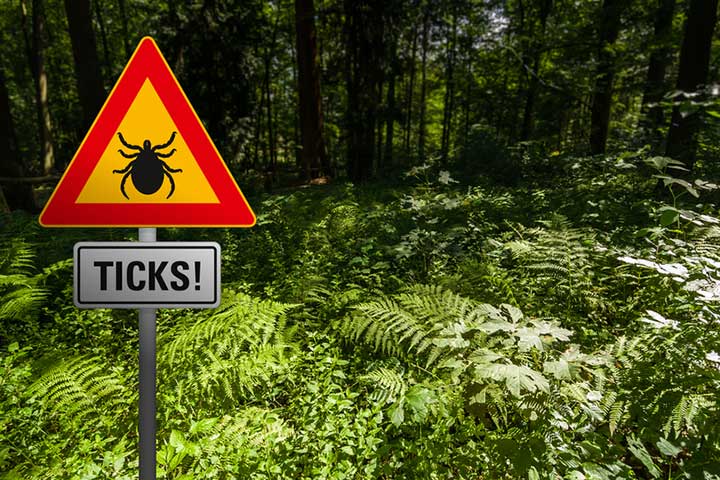 Most healthy individuals recover fully from anaplasmosis with treatment. Older people can be at a high risk of more serious effects.

Ticks are nasty bugs that transmit a number of diseases, among them anaplasmosis. What is anaplasmosis? It’s caused by the bacteria Anaplasma phagocytophilum, which the tick shares when it bites a host. Anaplasmosis is the second-most common tick disease, after Lyme disease.

Anaplasmosis symptoms usually appear one to two weeks after a tick bite. A rash can occur with anaplasmosis, but it’s often a signal that another pathogen is at work as well, such as Lyme disease. 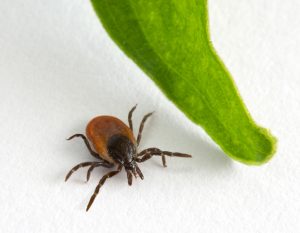 If you discover a tick bite on your body, be alert to the symptoms of anaplasmosis, as described here.

Symptoms of anaplasmosis may include:

Because these symptoms are general and overlap so many other diseases, physicians often make an anaplasmosis diagnosis based on assumption, as in evidence or knowledge of a tick bite or being in a tick-infested area. Blood tests can’t pinpoint the bacteria, as they won’t show up for seven to 10 days. However, a complete blood count and a liver function panel could show low platelet counts, low white blood cell counts, and/or elevated liver enzyme levels, which would be used as additional signs of possible anaplasmosis.

Most healthy individuals recover fully from anaplasmosis with treatment. Older people, though, can be at a high risk of more serious effects.

According to St. Luke’s Health System in Kansas City, anaplasmosis complications “are more common in those who have weak immune systems. This includes people who have AIDS, cancer, or organ transplants. They may need additional treatments, such as fluids, breathing support, or kidney dialysis. In a small number of people, these complications can lead to death.”

Although the Centers for Disease Control and Prevention state that only 1 percent of anaplasmosis cases become fatal, it’s a sobering thought—and impetus to get to the doctor immediately if you’ve been bitten by a tick and start experiencing the symptoms described in this post.

Doxycyline is usually prescribed based on symptoms of a tick-borne disease like anaplasmosis. The sooner the course of antibiotics is started, the better in getting rid of the illness. Doxycline belongs to the tetracyline group of antibiotics, which are effective on bacterial infections like anaplasmosis and Lyme disease.

Some people have trouble taking doxycline for anaplasmosis or any other bacterial infection. Among the drug’s side effects are a loss of appetite, nausea, and vomiting.  If you cannot keep the pill down, report that immediately to your physician, because you won’t get any benefits. Mild side effects from the drug may go away within a week or so if you can tolerate them, but serious side effects—bloody diarrhea, cramping, headaches, vision problems—should be reported to your doctor immediately, according to Healthline.com. 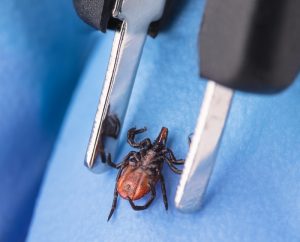 A view of a tick’s underside; note the mouth parts, through which a tick passes along such diseases as anaplasmosis and Lyme.

Ticks can’t jump or fly, whether they’re carrying anaplasmosis or any other disease. They hold onto a blade of grass, waiting transfer to a host who is close enough to crawl onto. Once they are aboard, they walk around, looking for a place with thinner skin and, usually, hair. Ticks are often found on the head, pubic hair, armpit, ears, bellybutton, and back of the knees. According to the CDC, they begin to feed 10 minutes to 24 hours after landing on a host.

This timing is critical. While many sites say it takes 24 to 48 hours for the transmission of a disease like anaplasmosis to occur, some experts have cited timelines as low as a few hours. One thing is clear: Once the tick begins to feed, it can transfer disease.

Any stage of a tick’s life may be capable of transferring diseases like anaplasmosis. “Most ticks go through four life stages: egg, six-legged larva, eight-legged nymph, and adult. After hatching from the eggs, ticks must eat blood at every stage to survive,” says the CDC.

TICK REMOVAL
Here’s how to remove a tick if you find one attached to you, per the Centers for Disease Control and Prevention:

Although your dogs, cats, horses, and other animals can also contract anaplasmosis from a tick bite, anaplasmosis is not contagious. It is only transferred by that bug bite. Therefore, preventing anaplasmosis involves reducing your chance of picking up a tick.

Know that ticks hide mainly in tall grass and brushy, wooded areas, but they are not confined to the woods. You may find a tick in your own garden.

The University of Rhode Island conducted a controlled study to compare tick bites on people wearing permethrin-treated clothing vs. regular summer clothing, like T-shirts and shorts. They placed blacklegged ticks on 15 (very brave) volunteers. The results after the two-day trial confirmed that permethrin-treated, military-weight clothing was most effective against tick bites (dead ticks were found under some of these clothing) and that summer-weight non-treated clothing had the highest potential for tick-borne pathogen transmission.

Additional repellents that are effective include products containing DEET, picaridin, IR3535, oil of lemon eucalyptus (OLE), para-menthane-diol (PMD), and 2-undecanone. The Environmental Protection Agency (EPA) has a website page that can help you choose exactly the right type of repellent for your outing.

Remember that ticks may be carried into your home, so always check for ticks as soon as you go inside. Doing a tick inspection on one another, showering, and changing clothes is always wise. The CDC advises: “Tumble-dry clothes in a dryer on high heat for 10 minutes to kill ticks on dry clothing after you come indoors. If the clothes are damp, additional time may be needed. If the clothes require washing first, hot water is recommended. Cold and medium temperature water will not kill ticks.”

Tick-Borne Illnesses in the USA