Home » Daily » Pain » Sunburn: How Bad Is It for Your Health? 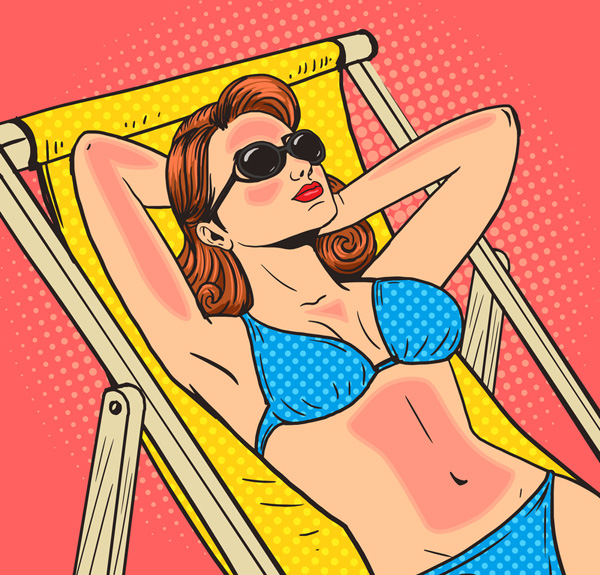 Respect the sun and its powerful rays. Sunburn is painful and not always quick to relieve.

Guess what! I’m a bad mother (well, at least some of the time). The other day I was playing in a pool with my kids. We had finally escaped the winter to a place where the warm sun shone, and our goosebumps dissolved into a distant memory. We were having so much fun that I didn’t remember to reapply their sunblock until 3 p.m. We’d been swimming since breakfast. As the kids looked up at me with their little cherub faces aglow with sunburn, my heart sank. What would the consequences be on their health?

Enjoying the sun isn’t a bad thing. In fact, we need a bit of sunlight to stay warm (during those moments, for example, when we’re standing outside on a cold soccer field). Plus, UV rays help our bodies synthesize vitamin D, which regulates our calcium supply and keeps our bones strong. (See, I was doing my kids’ health a favor!)

As with most things, however, too much of a good thing can be detrimental. An excess of UV rays (from the sun or tanning beds) can damage our immune systems, increasing our risk of skin cancer. It can also dehydrate our bodies and speed up the aging process (I see you, wrinkles, “age” spots, and freckles).

So how badly did I damage my kids’ health by letting them get one sunburn? Read on to find out.

What Is a Sunburn?

A sunburn (also known as solar erythema) is inflammation of the skin caused by overexposure to sunlight or UV rays. You’re probably quite familiar with its symptoms: sore, dry, red skin that stings and feels warm to the touch. In extreme cases, blisters, infection, fever, and chills can accompany your burn. You can get a sunburn from organic sources (the sun) or from unnatural sources (e.g., tanning beds or arc lamps).

How Long Does It Take to Get a Sunburn?

It depends who you ask since there are a whole bunch of variables at play. Those with darker skin take longer to burn than their fair-skinned peers, for instance, and a person sitting out in the intense mid-day sun will burn faster than one who’s outside in the morning.

With that in mind, a person can generally burn in about five minutes of exposure, although the effects can take longer to notice. Damage to our skin can be seen within two hours of being exposed to UV rays. Within three to four hours after exposure, the burn will be visible as reddened patches, peaking at about 24 hours.

Can You Get Skin Cancer from Sunburn?

Yes. One in five people will develop skin cancer at some point in their lives, found a study published in the Archives of Dermatology. The main cause of this disease: UV exposure (from the sun or unnatural sources like a tanning bed). Things that can increase your risk of skin cancer include: the amount of time you spend in the sun or tanning bed; prior sunburns; family history; skin type; and number of moles.

The three types of skin cancer caused by UV exposure are:

It’s the most common type of skin cancer: More than 4 million cases of basal cell carcinoma are diagnosed in the United States each year. These abnormal, uncontrolled growths appear in the skin’s basal cells, which live in the deepest layer of the epidermis (the outer layer of your skin). The good news: They don’t usually spread to other parts of the body and are therefore not life-threatening. They can, however, become disfiguring and should be examined by a doctor.

This is the second-most-common type of skin cancer. According to the Skin Cancer Foundation, more than 1 million cases of squamous cell carcinomas are diagnosed in the U.S. each year. The cause: a lifetime of cumulative UV exposure (this includes intense sun exposure during the summer, daily exposure year-round, and appointments at tanning beds).

This is the worst kind of skin cancer. According to the Skin Cancer Foundation, melanomas kill more than 10,000 people in the United States every year. While less common than basal cell carcinomas, melanoma growths can spread quickly and form malignant tumors.

What Dangers Can Result from Sunburn?

A mild sunburn will clear on its own in time, most often leaving no significant damage behind. It will age you, though, leaving its mark in the form of freckles, wrinkles, and sun spots.

Severe sunburns can result in more serious conditions, such as second-degree burns, dehydration, heatstroke, heat exhaustion, cataracts, and infection. They also wreak havoc on your immune system, leaving you susceptible to bacterial and viral infections and weakening the effects of certain immunizations, according to the World Health Organization.

Another downside of a sunburn: It can worsen chronic diseases like herpes simplex, eczema, lupus, and actinic dermatitis. Most problematic, though, is sunburn’s capacity to increase the risk of skin cancer.

Isn’t Some Sun Good for You?

Yes. As I mentioned earlier, UV rays help boost our levels of vitamin D. According to the World Health Organization, “Small amounts of UV radiation are beneficial for people and essential in the production of vitamin D. UV radiation is also used to treat several diseases, including rickets, psoriasis, and eczema.”

Researchers of a study published in the Journal of Dermatological Science also found that a short stint in the sun could protect you from further UV damage. The theory goes like this: A little bit of UV exposure increases the pigmentation in your skin (i.e. tanning).

When in contact with the UV rays, your body alters its melanin (the dark brown pigment in your hair and skin). After a few repeated short-term exposures your skin will thicken, which could protect you from a burn. However, repeated UV exposure could suppress immunity in your cells, which could lead to a non-melanoma skin cancer or other infections.

Is One Sunburn Enough to Give You Skin Cancer?

Possibly. Even one lone sunburn can cause detrimental effects to your health (e.g., dehydration, blisters, sun spots, and infection), but multiple burns, especially during childhood, can increase your risk of skin cancer dramatically.

Researchers of a study published in the journal Cancer, Epidemiology, Biomarkers & Prevention found that having five blistering sunburns between the ages of 15 and 20 increases a person’s risk of developing melanoma by a whopping 80 percent.

What Is Sun Poisoning?

Sun poisoning is like a sunburn on steroids. Think blisters, a rash of red, dry peeling skin, and pain.

Early symptoms are similar to those of a regular sunburn (warm, reddened skin, and inflammation), which can cause it to go unnoticed. Within a short time, however, the effects of sun poisoning become more severe. They can last anywhere from four days to a week or more and include:

The obvious risk factor for sunburn, of course, is unprotected time spent in the sun The following risks also make you more susceptible to a burn: