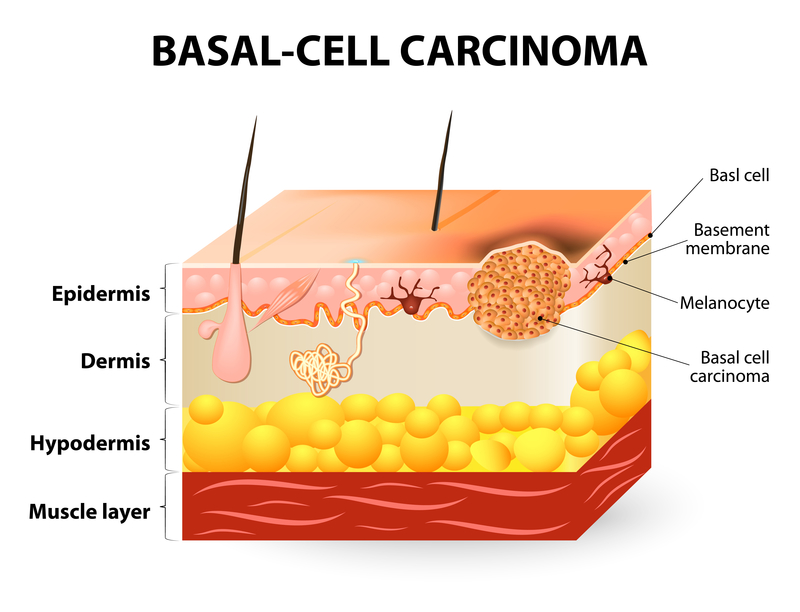 Researchers found that every 10-gram increase in alcohol consumed each day was associated with a greater risk of basal cell carcinoma and squamous cell carcinoma.

Basal cell carcinomas and squamous cell carcinomas are forms of skin cancer that are less invasive and less likely to spread than melanomas, but they still need to be diagnosed, treated, and prevented.

Basal cell carcinoma (BCC) is the most common form of skin cancer. It is classified as a non-melanoma form of the condition, and accounts for about 75 percent of all skin cancer cases. The overall number of people affected by BCC has been rising for four decades. The cure rate is 85 to 99 percent.

Basal cell carcinomas are slow-growing, painless, malignant tumors that develop in the epidermis, the top layer of skin. They seldom spread, but if left untreated, they can affect surrounding areas, and even move into bone tissue.

Who is susceptible? People who spend a lot of time outdoors, those who are fair-skinned, and those who live in areas of the country where there is more sunlight per day. Others in the high-risk group are people with blue or green eyes, blond or red hair, and those who have been overexposed to X-rays and other forms of radiation.

The sun can be blamed for 90 percent of all skin cancers. The areas of the body most likely to be affected are the face, ears, neck, scalp, and back.

Basal Cell Carcinoma: By the Numbers

The Skin Cancer Foundation says there are five warning signs of BCC:

Other signs to watch for include an open sore that does not heal, irregularly shaped blood vessels in or around the spot, or a sore that has a depressed area in the middle.

There are seven subtypes of BCC, but the most common is a nodular BCC. It usually has a smooth, round, waxy area that could be yellow or gray, and it varies in size from one centimeter to a few millimeters. The slightest irritation to the lesion can cause bleeding. Large nodular BCCs are easy to diagnose, but small ones may resemble warts, moles, psoriasis, or other noncancerous skin conditions.

A skin biopsy confirms whether or not an area of the skin is cancerous, and if so, which type of skin cancer exists. Biopsies are conducted in the office of a dermatologist, who uses a topical analgesic to prepare the site. He or she will perform a biopsy, which involves cutting and removing the affected skin tissue.

BCC treatment depends on its size, location, and depth. Scraping off the affected area or cutting it away are common methods.

When the cancer reaches an advanced state, surgery is not always an option. Vismodegib (Erivedge) was the first drug to treat adult patients with BCC. The drug is for patients with locally advanced BCC who are not candidates for surgery or radiation, and for patients whose cancer has spread to other parts of the body.

A second drug, sonidegib (Odomzo), which also targets the hedgehog signaling pathway, was approved to treat BCC by the FDA in 2015. The drug is taken in pill form once a day, and in clinical trials 58 percent of patients had their tumors shrink or disappear.

The two drugs (vismodegib and sonidegib) are equally effective against BCC, according to a study conducted at the Mayo Clinic.

The FDA earlier approved electronic surface brachytherapy for non-melanoma skin cancers, including BCC and squamous cell carcinomas. The procedure uses a machine to generate targeted doses of radiation that physicians apply through an applicator placed directly on the skin.

Each treatment takes about three minutes—typically with two treatments weekly for four weeks. However, its use is not widespread because of cost and lack of conclusive evidence that outcomes are as effective as surgery.

Limited sun exposure is the single most important measure for prevention of any kind of skin cancer. Further reduce your risk by using sunscreen with an SPF of 30 to 50, wearing pants, long skirts, long-sleeved shirts, and wide-brimmed hats that provide adequate protection.