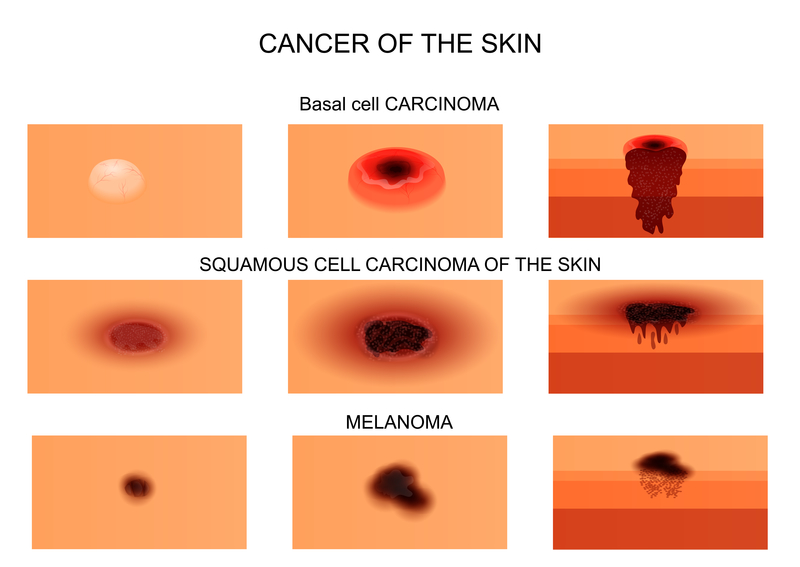 In a recent study, the development of non-melanoma type skin cancers in male mice exposed to UVB light was 50 percent lower in those fed a diet of 10 percent dehydrated tomato powder when compared to controls.

Melanoma: By the Numbers

6: Number of sunburns it takes to double your risk of melanoma

62: Average age of a person diagnosed with melanoma

86: Percent of melanomas caused by exposure to the sun

99: Percent of cases cured with early detection and treatment

Melanoma is the deadliest of all skin cancer types, yet the cure rate, with early detection and treatment, is 99 percent. Unfortunately, too many people delay treatment, even when they know they have a potentially life-threatening disease. The average age of people diagnosed with melanoma is 62, but it can begin at almost any age.

The distinguishing characteristic of melanoma is uncontrolled growth of cells that produce melanin, which is one of the body’s coloring agents. Most melanomas have a black or blue-black color, and they appear abnormal, even ugly.

The American Academy of Dermatology promotes the A-B-C-D-E method of identifying potential melanomas. If you recognize the signs below or if you notice a change in a mole, see a dermatologist as soon as possible

A—Asymmetry. One-half of the lesion does not match the other half.

C—Color. Not uniform and could include shades of brown, black, and tan, with streaks of red, white, or blue.

D—Diameter. More than six millimeters (about one quarter-inch) when diagnosed, but possibly smaller.

E—Evolving. Change in size, shape, color, or thickness, or beginning to itch, bleed, and form a crust.

Basal Cell Carcinoma: By the Numbers

2: BCC is twice as common in men as in women.

p53: The name of a gene that acts as a tumor suppressor

98: Percent of BCC cases cured with early detection and treatment

Basal cell carcinoma is the most common form of skin cancer. It is a non-melanoma form of the condition, and accounts for about 75 percent of all skin cancer cases.

BCCs are slow-growing, painless, malignant tumors that develop in the lower part of the top layer of skin. They seldom spread, but if left untreated, they can affect surrounding areas and even move into bone tissue.

Who is Susceptible to the Three Skin Cancer Types?

People who spend a lot of time outdoors, those who are fair-skinned, and those who live in areas of the country where there is more sunlight per day. Others in the high-risk group are people with blue or green eyes, blond or red hair, and those who have been overexposed to X-rays and other forms of radiation.

The main cause of BCC is exposure to sunlight. The areas of the body most likely to be affected are the face, ears, neck, scalp, and back.

The Skin Cancer Foundation says there are five warning signs:

Other signs to watch for include: an open sore that does not heal, irregularly shaped blood vessels in or around the spot, or a sore that has a depressed area in the middle.

3: SCC is three times as common in men as in women

20: Percent of non-melanoma skin cancer that is SCC

95: Percent of BCC cases cured with early detection and treatment

Middle-aged and older adults are more susceptible to SCC. Other risk factors are a fair complexion, frequent exposure to the sun, a history of working in the sun, early childhood overexposure to the sun, artificial tans from tanning beds, and living in an area of high-intensity sunlight.

The cancer appears as a rough, scaly bump that grows, and the surface of the lesion also may have a flat, reddish patch. It usually occurs on the face, ears, neck, hands, or arms, but can develop elsewhere. Here are four warning signs of SCC: