Home » Daily » Nutrition » Is Popcorn Healthy? 4 Reasons Why You Should Eat It More Often 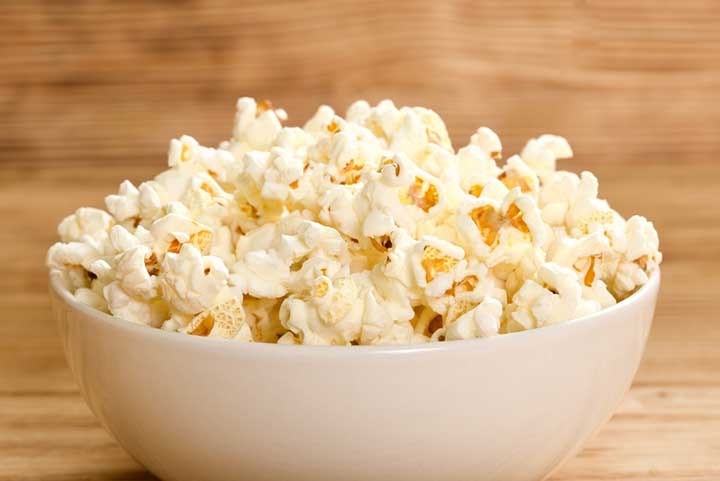 In general, air-popping your popcorn is the healthiest option to choose, followed by popping it in oil on your stovetop.

I can’t recall ever going to the movies with my family without buying a huge tub of hot, buttery popcorn. It’s the perfect companion to our favorite comedies, action flicks, and sob stories, and once you’ve had one handful, it’s hard to stop yourself from reaching for another. . . and another. No wonder why Americans eat 13 billion quarts of popcorn annually, according to the Popcorn Board. But, is popcorn healthy?

Your first instincts may tell you that popcorn belongs on the long list of junk foods that your doctor says you should avoid. It may be time, however, to reconsider popcorn’s place in a healthy, balanced diet. Check this out: According to the USDA, one cup of plain, air-popped popcorn contains 32 calories, 1 gram of protein, 0.4 grams of fat, 6 grams of carbohydrates, 1 gram of fiber, 1 gram of sodium and 0.07 grams of sugar.

Pretty good stats, right? Let’s take a look at a few more reasons why popcorn may be the right snack for you.

Is Popcorn Healthy If It’s Made at the Movie Theater?

Now, here’s the bad news. As healthy as popcorn can be, most of us love it “movie theater style,” which is covered in fat and salt.

You may not always have time to make your own popcorn at home, so if you’re looking to grab a bag at the grocery store, it’s important to check the ingredients before purchasing. Look for varieties that have only recognizable ingredients—so that you can avoid artificial flavors and colors—and that don’t list sugar as its first ingredient. You’ll also want to check that the popcorn is popped in a non-hydrogenated oil and that it contains reasonable levels of sodium.

Adding buttery topping can increase the number of calories by 120 per tablespoon. The contrast between movie theater popcorn and air-popped or microwave popcorn before the topping is even added is mainly due to the type of fat used to cook it. Movie theaters tend to use coconut, soybean, or canola oil to pop their popcorn.

The salt content of movie theater popcorn is also a huge concern. Even before adding extra salt, a large popcorn can contain more than 2,000 milligrams of sodium, according to LiveStrong.com. That’s almost an entire day’s worth of sodium if you’re following the American Heart Association’s sodium intake guidelines.

Is Popcorn Healthy If It’s Made in the Microwave?

If the high amounts of salt and fat as well as the artificial colors and flavors found in many brands of microwave popcorn aren’t enough to scare you away, then the risk of “popcorn lung” might be.

Popcorn lung, medically known as bronchiolitis obliterans, is a potentially fatal lung disease that obstructs the small airways of the lungs and can cause chronic coughing and shortness of breath, according to BerkleyWellness.com. The condition, which is more common in people who work in factories that package microwave popcorn, can be caused by inhaling large amounts of the artificial buttery flavor found in microwave popcorn, which is made from synthesized diacetyl. This chemical is also used in tobacco and e-cigarettes.

But this doesn’t mean you have to quit microwave popcorn entirely. If you eat popcorn only occasionally, your risk will remain low. Just make sure you prepare your microwave popcorn in a well-ventilated kitchen, and allow the bag to cool before opening it.

In general, air-popping your popcorn is the healthiest option to choose, followed by popping it in oil on your stovetop.

If your taste buds won’t allow you to get used to the taste of plain popcorn, here are a few swaps you can try to add some flavor without the extra sugar, saturated fat and salt:

Nutritional yeast and dill deliver a wonderful buttery-cheese flavor without the dairy. This recipe is a delicious way to increase dietary fiber and amp up your nutrient count.