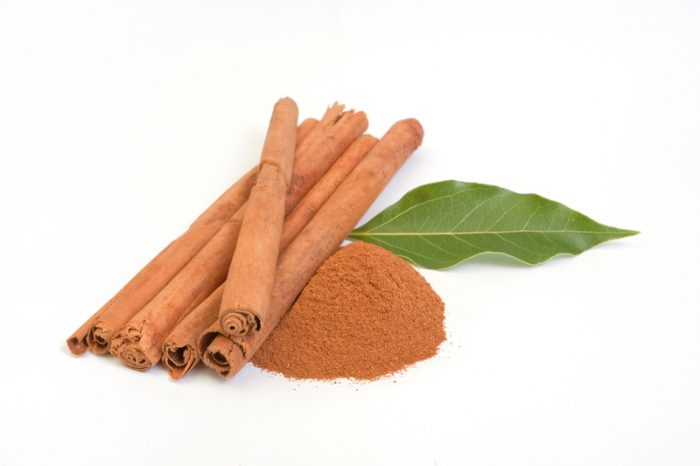 Among the many health benefits of cinnamon: It decreases cholesterol and triglyceride levels while also improving cognitive function, according to research.

Cinnamon has been highly prized since ancient times. You can find references to it in the Bible and on Egyptian papyri. And, at one time in ancient Rome, cinnamon was considered more precious than gold. In fact, this little spice was so treasured that wars were fought over it. Today, however, the value of this sweet and savory herb comes not in currency, but in the amazing health benefits of cinnamon supplements, powders, and essential oils.

Cinnamon comes from tree bark. The bark is stripped and sun-dried, curling into the well-known shape of cinnamon sticks, called quills.

While there are several varieties of cinnamon, there are two main types:

The Cassia type is the most common cinnamon found on supermarket shelves, as it is the primary type of cinnamon imported into the United States. It contains a compound called coumarin, which has been shown in some animal studies as toxic when consumed in large quantities.

BENEFITS OF CINNAMON VS. OTHER SPICES

One study evaluated the antioxidant activity of 26 different spices. The major types of antioxidants identified in the spice extracts that were studied included phenolic acids, phenolic diterpenes, flavonoids, and volatile oils (e.g., aromatic compounds). Outperforming such other superfoods as clove and oregano, cinnamon was the clear winner with the highest antioxidant capacity screened.

There are three elements in the essential oil of “true” Ceylon cinnamon, and they make it a powerful therapeutic spice: cinnamyl alcohol, cinnamaldehyde, and cinnamyl acetate. The combination of these elements gives Ceylon cinnamon its strong antioxidant properties.

How to Take Ceylon Cinnamon

Unfortunately, no consensus has been reached regarding how much cinnamon should be consumed daily to achieve the health benefits.

One study showed that taking 1, 3, or 6 grams (g) of cinnamon per day all had an impact on lowering glucose, triglycerides, LDL cholesterol, and total cholesterol in people with type 2 diabetes. Therefore, the typical supplement dose ranges from 1 g to 6 g per day.

When buying a cinnamon supplement, be sure to purchase the “true” Ceylon cinnamon type (which should be noted on the label) and follow the manufacturer’s dosing instructions.

When eating cinnamon powder, Harvard Medical School suggests that consuming as little as 1/2 teaspoon (about 2 g) of cinnamon each day can reduce your blood sugar, cholesterol, and triglyceride levels by as much as 12 to 30 percent.

For cinnamon oils, the typical dose is 1 to 2 drops in hot water or tea. Again, be sure the cinnamon oil comes from the Ceylon type and not the Cassia type. And, always dilute the oil before consuming.

Children should not take cinnamon essential oil or supplements without a physician’s recommendation.