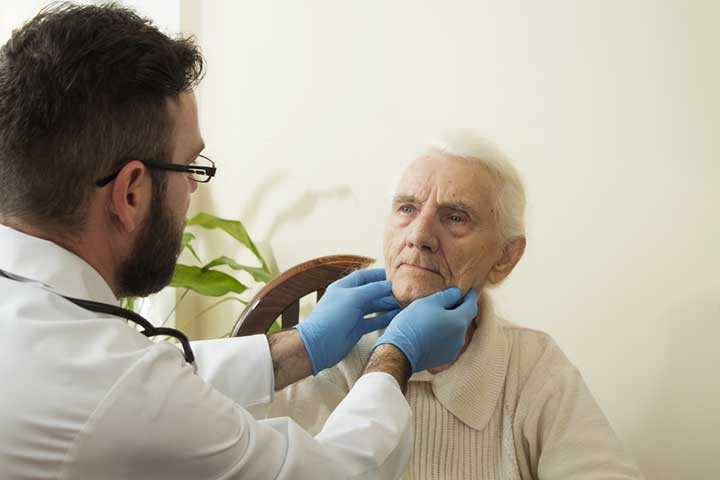 In addition to swelling, which can be anywhere from pea to kidney-sized, other symptoms associated with swollen lymph nodes include tenderness and/or pain in that area.

Finding a lump is frightening—no matter where it is. Swollen lymph nodes are your body’s way of telling you that something’s wrong. Usually, they’re alerting you to a mild infection or illness. Once your immune system has fought the pesky invader, your lymph nodes will shrink back to their normal size. Occasionally, though, they can indicate a more serious condition such as cancer.

What Causes Lymph Nodes to Swell?

Swollen lymph nodes can appear for a variety of reasons. Luckily, only a few of these include serious medical conditions. Most often, they are caused by a bacteria or virus (i.e. a common cold). “For most patients, the main reasons for swollen lymph nodes [a.k.a. lymphadenopathy] are benign and self-limited,” says Dr. Steven T. Benaderet, M.D. Family Medicine and Regional Medical Director of the Northeast Medical Group in Westport, CT. “They are most commonly associated with routine infections like the flu, viral stomach infections, or skin infections. Less commonly they can be associated auto-immune illnesses, medications or cancers [i.e. lymphoma].”

Even less common causes of swollen lymph nodes are:

WHAT IS A LYMPH NODE?

Lymph refers to a colorless fluid containing white blood cells. It passes through the body’s tissues and the lymphatic vessels into the bloodstream. A lymph node is a round mass that helps make up the immune system. According to the National Cancer Institute, “lymph nodes filter substances that travel through the lymphatic fluid, and they contain lymphocytes (white blood cells) that help the body fight infection and disease.” Basically, these nodes stop abnormal or diseased cells from moving through the lymphatic system. When fighting an infection, these nodes fill with bacteria and dead or diseased cells. The body contains hundreds of these nodes, clusters of which can be found in:

Each cluster drains a specific area of the body.

In addition to swelling, which can be anywhere from pea to kidney-sized, other symptoms associated with swollen lymph nodes include tenderness and/or pain in that area. If their cause is an infection, symptoms could also include:

Treatment for this condition depends on the cause of swelling. Most often, Benaderet says, “lymph node swelling resolves spontaneously in time with no specific treatment required.” A warm compress may be all that’s needed to help relieve your symptoms. Sometimes, however, they may require other types of treatment, which will differ depending on their cause. These include:

Those who suffer from a more serious infection (i.e. HIV) or an immune disease such as lupus may experience swelling in multiple lymph nodes at different locations throughout the body.

Those with a tumor will likely notice a quickly growing, hard, and unmovable node. Swollen lymph nodes that aren’t treated can lead to an abscess (an infected, pus-filled node that may need to be drained) or sepsis (a potentially fatal infection in the bloodstream).

When to See a Doctor

As soon as you find a swollen lymph node, book in to see your primary care doctor, suggests Benaderet. For most, finding them can be alarming, but often, “a thorough medical history and examination can figure out why a lymph node has become an issue,” he says. At that first visit, your doctor can often diagnose the cause of your condition and offer treatment. As mentioned earlier, a swollen lymph node is most commonly associated with a minor infection, so once this clears up, it will likely disappear.

LYMPHADENITIS
The term for swollen lymph nodes that are caused by a bacterial or viral infection.

Sometimes, however, a person may suffer from worrisome symptoms which require further testing. “Systemic symptoms like fever, night sweats, and unexplained weight loss may necessitate further testing of your lymph nodes, including tests like an ultrasound, cat scan, or even lymph node biopsy to help discover a cause of your lymphadenopathy,” Benaderet says. Other warning signs include: