Home » Daily » Eyes, Ears, Nose & Throat » Tuberculosis: Despite Progress, It’s “Not Yet a Disease of the Past” 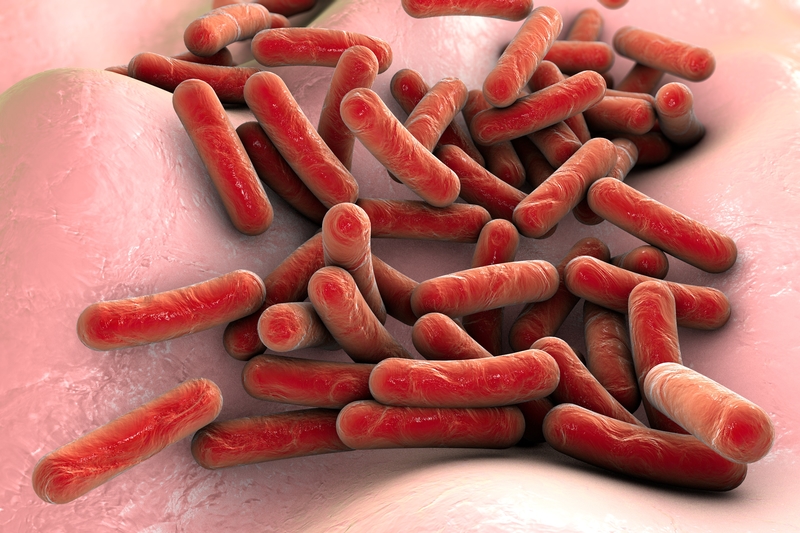 Here's a close-up view of the Mycobacterium tuberculosis (Mtb) bacteria.

Tuberculosis is the leading infectious cause of death in the world, a contagious threat caused by the bacterium Mycobacterium tuberculosis (Mtb), which attacks the lungs and can spread to other parts of the body. Current statistics show that tuberculosis (TB) infects more than 10 million people worldwide every year, and that it causes nearly 2 million deaths annually.

Yet in America, you don’t hear as much about tuberculosis today as you would have one and two centuries ago. By the 1800s, the disease had reached epidemic proportions. Consider this stark assessment from an American Experience episode, The Forgotten Plague, on PBS: “By the dawn of the 19th century, tuberculosis—also called consumption—had killed one in seven of all people who had ever lived.”

Throughout the 1800s, patients suffering from TB were desperate for a cure. The challenge of treating patients prompted the creation of “sanatorium” facilities—medical retreats typically set up in rural environments for those trying to beat TB. 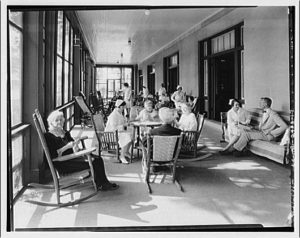 Here’s a 1920 view of the Shady Rest sanatorium in White Heath, Ill. The retreat was built on a 28-acre natural area on the Sangamon River as a retreat for tuberculosis patients.

The first sanatorium facilities, or sanatoria, appeared as early as 1836 in Europe. By the last quarter of the century, they were popping up in America.

In those pre-antibiotics days, the rationale for sanatorium life went like this: Fresh-air climate combined with lots of rest would reduce one’s chances of catching and spreading germs, and thus would stamp out tuberculosis. Sanatorium, by the way, is sometimes spelled “sanitorium” or “sanitarium.” 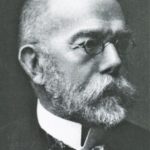 Scientist Robert Koch discovered the bacteria that caused tuberculosis as well as cholera and anthrax.

In 1882, however, German scientist Robert Koch—known as the “founder of modern bacteriology”—discovered the tubercule bacillus, a bacterium of the genus Mtb. The discovery led to the realization that TB wasn’t a genetic condition; it was highly contagious bacteria that could be prevented through good hygiene. The U.S. launched an initiative to educate Americans on the importance of cleanliness and avoidance of germs as a means to stop tuberculosis.

And in 1944, decades after Koch discovered what caused TB, scientists Albert Schatz, Elizabeth Bugie, and Selman Waksman developed streptomycin, the first effective antibiotic against Mtb. But even before that discovery, TB mortality rates had been declining sharply, as British physician and epidemiologist Thomas McKeown wrote in the mid-1950s, because of improved living standards and a focus on better hygiene.

TUBERCULOSIS BY THE NUMBERS

As the fight against tuberculosis gained momentum in the 20th century, the United States saw a shrinking number of cases, prompting the eventual disappearance of sanatorium retreats. By 2017, according to a new report by the Centers for Disease Control and Prevention, the total of number of new TB cases in the United States has shrunk to 9,093 (down from 9,272 in 2016). It’s the lowest count on record in U.S. history; there are now fewer than 3 cases per 100,000 people.

While the trend continues in the right direction, the decline in cases didn’t fall in 2017 as heavily as it did in recent years. “The U.S. has done a great job in controlling TB,” according to Rebekah J. Stewart, a nurse epidemiologist at the CDC and lead author of the CDC’s latest TB study. “We have the lowest case numbers and rates on record. But the slowing rate of decline reminds us that we need to renew our efforts. TB is not a disease of the past.”

New York City, for example, experienced its biggest upward spike in TB cases in more than two decades. The Big Apple had 613 verified cases of TB in 2017, up 10 percent from the total of 556 in 2016. Not since 1992 had New York seen such a dramatic spike.

The Battle to Eradicate TB

Globally, TB is far more rampant than in the U.S. and other developed countries. According to the CDC, one-quarter of the world’s population is infected with tuberculosis today. It’s a leading killer of people who are HIV-infected, the CDC reports.

The organization Médecins Sans Frontières (MSF), or Doctors Without Borders, published this dire message in March 2018: “The world is losing the battle against tuberculosis, which remains the deadliest infectious disease despite being curable. TB patients and treatment providers face an array of challenges, from diagnosis to treatment.”

Tuberculosis, the organization points out, overtook HIV/AIDS in 2015 as the world’s top infectious disease killer. The number of deaths attributed to TB worldwide in 2016 reached 1.7 million. And TB has infected 10.4 million people around the world—and “too few have been properly diagnosed or treated,” according to a release from MSF. “This reflects the struggling health system in many countries—low- and middle-income countries account for 95 percent of deaths—and the fact that TB affects mainly the vulnerable.”

How Do You Get Tuberculosis?

Mycobacterium tuberculosis is what’s known as an airborne pathogen, meaning TB bacteria can spread through the air from one person to another via coughing, sneezing, spitting, laughing, or even speaking. That sounds disturbing enough, but at least, as the CDC points out, it doesn’t spread by shaking someone’s hand, sharing food or drink, touching bed linens or toilet seats, sharing a toothbrush, or kissing.

And, as the American Lung Association (ALA) points out, it’s simply “not easy to become infected with tuberculosis. Usually a person has to be close to someone with TB disease for a long period of time. TB is usually spread between family members, close friends, and people who work or live together. [It spreads] most easily in closed spaces over a long period of time.”

Not everyone infected with TB bacteria will sick. The medical community defines TB conditions as:

In both cases, treatment is critical. “Despite popular misconceptions that tuberculosis is a disease of the past,” the American Lung Association states, “it continues to pose a significant threat to global public health.”

At first, tuberculosis symptoms may present the way the first strains of a cold do: a throat tickle that turns into a constant caught, a fever, and night sweats. The coughing may continue on for three weeks or more, and can be accompanied by loss of appetite and weight loss, weakness, and fatigue.

Symptoms may also include pain in the chest; coughing up blood or sputum (mucus from deep inside the lungs); or chills.

Such symptoms overlap with a great number of other ailments, so a test may be necessary. The two standard tuberculosis tests are a positive TB skin test and a TB blood test. While these tests reveal an infection of TB bacteria, they do not detect latent TB infection (LTBI) are at risk of developing the TB disease.

Antibiotics typically will cure TB, although it can take up to nine months. A patient, experts point out, needs to finish the full prescription or will risk becoming sick again. If patients “stop taking the drugs too soon, they can become sick again,” according to Medline Plus. “If they do not take the drugs correctly, the TB bacteria that are still alive may become resistant to those drugs.”

Who’s Most at Risk?

Tuberculosis, while minimally spread today compared to generations ago, is more of a threat to the following populations, according to the Centers for Disease Control and Prevention.

Click here to view the CDC’s page on TB testing.

THE LONG REACH OF TUBERCULOSIS

Tuberculosis is caused by a bacterium called Mycobacterium tuberculosis (Mtb), which usually attacks the lungs but can also infect any other part of the body, including the kidneys, spine, and brain. During the 19th and early 20th centuries, TB was the leading cause of death in the United States. Celebrities weren’t spared, either: TB claimed First Lady Caroline Harrison in 1892 (at age 60), silent film star Mabel Normand in 1930 (age 38), novelist Wallace Thurman in 1934 (age 32), author Thomas Wolfe in 1938 (age 38), and actress Vivien Leigh in 1967 (age 54), to name just a few.

The disease also took baseball great Christy Mathewson in 1925 at age 45. Pitching mainly for the New York Giants between 1900 and 1916, “Matty” set modern National League records with 37 wins in a single season, wins during a career (373), and most consecutive 20-win seasons (12). Baseball fans will appreciate his ERA: a remarkable 2.13. 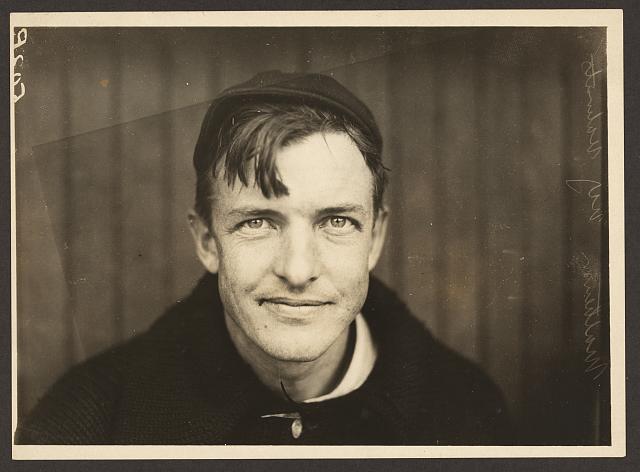 Christy Mathewson, as photographed in 1910 by Paul Thompson. (Library of Congress (LC-DIG-ppmsca-13527)

Toward the end of his career, Mathewson was commissioned a captain in the U.S. Army’s Chemical Warfare Division and sent overseas to France, where he contracted a serious bout of influenza and also was exposed to mustard gas.

After hospitalization, he returned home. Unable to shake a long-enduring cough, he was diagnosed with tuberculosis. In 1922, with a prognosis of six weeks to live, he moved with his wife to a sanatorium in 1922 at Saranac Lake, N.Y. Yet he managed to beat the disease—or so he thought. He felt strong enough by 1923 that he returned to baseball to run the lowly Boston Braves as president. Despite his physician’s warnings, he threw himself into rebuilding the team. Within two years, the tuberculosis took hold again, and he died in 1925, not long after his 45th birthday.

As we know from the American Lung Association, tuberculosis is more likely to spread via family members or those close to us. That may have been a factor with Mathewson: His brother Henry died of tuberculosis in 1909 at the age of 30.