Home » Daily » Pain » Picking Scabs: Why We Do It and How to Stop 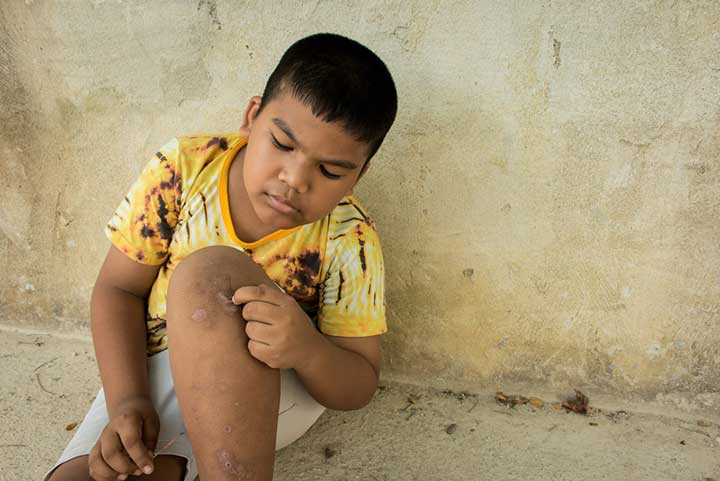 Skin picking disorder can occur at multiple times in a person’s life—during childhood, adolescence or between the ages of 30 and 45, found researchers from the University of Chicago.

Ever enjoyed popping a pimple? How about poking a blister? It can feel gratifying to watch the grossness ooze out, right? Many people are guilty of picking scabs and some people even eat them afterwards. In fact, our desire to pick our scabs could say something important about our mental health.

Why Do People Pick Scabs?

Many of us feel pleasure and satisfaction when “picking scabs, bumps, blemishes or even healthy skin,” says Emily Ricketts, clinical specialist in the department of psychiatry and biobehavioral sciences at UCLA. But why do people enjoy picking scabs? It could be a result of “deficits in the areas of the brain related to reward processing,” she says.

According to a study in the American Journal of Psychiatry, picking scabs usually begins as an unconscious activity but becomes more conscious and prominent over time. When this behavior becomes compulsive, it’s termed excoriation (a.k.a. skin picking) disorder, which is classified as an “obsessive-compulsive and related disorder” in the Diagnostic and Statistical Manual of Mental Disorders, Fifth edition (DSM-5).

“This psychiatric condition refers to repeated picking, squeezing, digging and/or scratching at the skin, with resultant skin damage,” Ricketts explains. Those who suffer from excoriation may also have trouble stopping or decreasing their scab picking and may feel shame, guilt, anxiety or depression surrounding their condition. Some may avoid or feel uncomfortable in social situations, have difficulty with relationships (i.e. with friends and family) and may struggle to focus at school, work or home.

Skin picking disorder can occur at multiple times in a person’s life—during childhood, adolescence or between the ages of 30 and 45, found researchers from the University of Chicago. Triggers, which differ for everyone who is compulsively picking scabs, can include: stress, anxiety, boredom, fatigue, anger, or the feel or look of a bump or blemish.

Is It Bad to Pick Scabs?

Remember what your mom told you—don’t pop a pimple or it will leave a scar. She was right. Not only can picking scabs lead to scarring, but it can cause a host of other, more serious problems. Researchers of a study published in the Journal of Clinical Child & Adolescent Psychology claim “when such behaviors [e.g. picking scabs] occur at a high frequency or intensity, they can produce physical and/or psychosocial problems.”

How to Stop Picking Scabs

If your scab picking habit is extreme (i.e. it’s causing serious physical and psychological effects), it’s time to seek help from a professional. In addition, the following are a few successful treatment options:

Since many scab pickers are triggered by looking at their skin, Ricketts suggests reducing the time spent in front of a mirror, keeping skin covered with long sleeves or pants and using Band-Aids to protect the scab from both infection and your picking habit.

Determine the source of your scabs so you can treat and prevent them, suggests Ricketts. “For instance, scabs on the face may be partially related to picking at acne. Treating the acne may help to reduce the tactile and visual triggers to pick.”

Some people are sparked to pick scabs by feeling alone, worried, stressed or bored. Ricketts suggests using a fidget object when you’re feeling emotional, or spending time with others to take your mind off worries and avoid loneliness.

Certain feelings (i.e. stress, anger, sadness, boredom, and anxiety) can lead to picking scabs. Seek help to deal with these emotions before they cause you to pick.

Therapies such as Cognitive Behavioral Therapy (CBT) can help people identify the triggers (i.e. situations or emotions) for their picking and teach them to find ways to avoid picking during these moments. These therapies are also helpful at “increasing awareness of picking and using a behavior that is physically incompatible with picking,” says Ricketts.

“There is also some research support for the therapeutic benefits of medications, including selective serotonin reuptake inhibitors and N-acetyl cysteine,” Ricketts adds.

THE 5 SIGNS OF SKIN PICKING DISORDER

According to the TLC Foundation for Body-Focused Repetitive Behaviors, the following are signs of excoriation (a.k.a. skin picking) disorder: