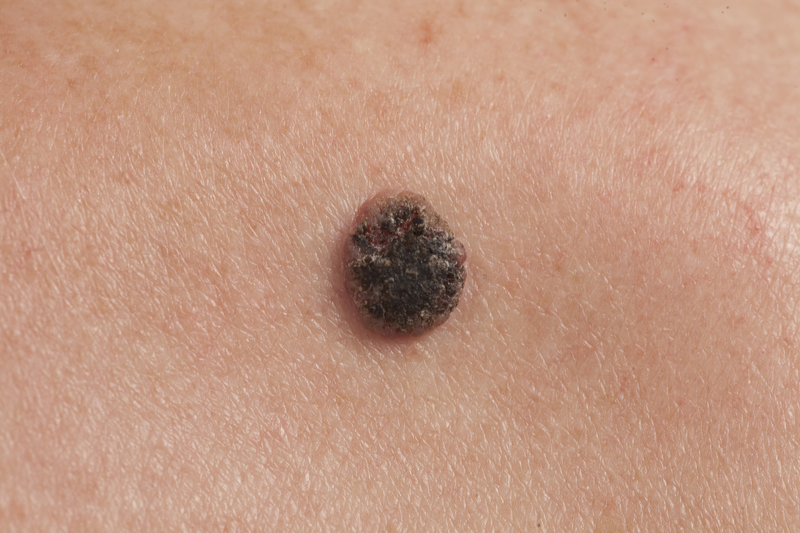 You’ve heard the warnings about the dangers of skin cancer over and over again, and you know the importance of protecting your skin from the sun using sunscreen and clothing, but do you know what skin cancer symptoms to look for? Depending on your medical and family history, you may be at a higher risk of developing skin cancer, so it’s imperative that you learn all of the different types and how they might change the look and feel of your skin.

Before describing skin cancer symptoms, it is important to be able to recognize a precancerous condition called actinic keratosis (AK).

Lesions are abnormal changes in tissues, such as a break or wound on the skin. Lesions from actinic keratosis are referred to as precancerous because they can turn into malignant tumors. Forty to 60 percent of all SCCs begin as actinic keratosis, and recent evidence suggests the two are genetically linked.

Actinic keratosis is likely to be caused by cumulative exposure to the sun’s rays. Its characteristics are as follows:

Diagnosis of skin cancer symptoms may be as simple as an inspection by a dermatologist, but a biopsy may be necessary to determine if potentially cancerous changes are present.

The distinguishing characteristic of melanoma, which is the deadliest of skin cancers, is uncontrolled growth of cells called melanocytes. These cells produce melanin, which is one of the body’s coloring agents. Most melanomas have a black or blue-black color, and they appear abnormal and even ugly.

The American Cancer Society promotes the A-B-C-D-E method of identifying potential melanomas. If you recognize the signs below or if you notice a change in a mole, see a dermatologist as soon as possible.

Other signs to watch for include: a sore that does not heal, irregularly shaped blood vessels in or around the spot, or a sore that has a depressed area in the middle.

There are seven subtypes of BCC, but the most common is a nodular BCC. It usually has a smooth, round, waxy area that could be yellow or gray, and it varies in size from one centimeter to a few millimeters. The slightest irritation to the lesion can cause bleeding. Large nodular BCCs are easy to diagnose, but small ones may resemble warts, moles, psoriasis, or other noncancerous skin conditions.

Squamous cell carcinoma is the second most common form of skin cancer and is more dangerous than basal cell carcinoma if not treated. The cure rate is 95 percent with early detection and treatment.

A squamous cell carcinoma appears as a rough, scaly bump that grows, and the surface of the lesion also may have a flat, reddish patch. It usually occurs on the face, ears, neck, hands, or arms, but can develop elsewhere. Here are four signs of SCC:

Patients who have had multiple episodes of SCC, compared with those who have had one episode, are at a particularly high isk of recurrence and metastasis (spreading). Also, the thicker a skin cancer tumor, the more likely it is to metastasize, and SCC on or near the ears are four times more likely to spread than those elsewhere on the body.

Merkel cell carcinoma is a relatively rare form of skin cancer that results in about 2,000 new cases per year—most of them men over the age of 50. The risk increases with age.

MCC is caused by uncontrolled growth of Merkel cells located in the top layer of skin. The disease is likely to appear as a painless, red or violet-colored lump on the skin that has been overexposed to the sun, especially the head, neck, and arms.