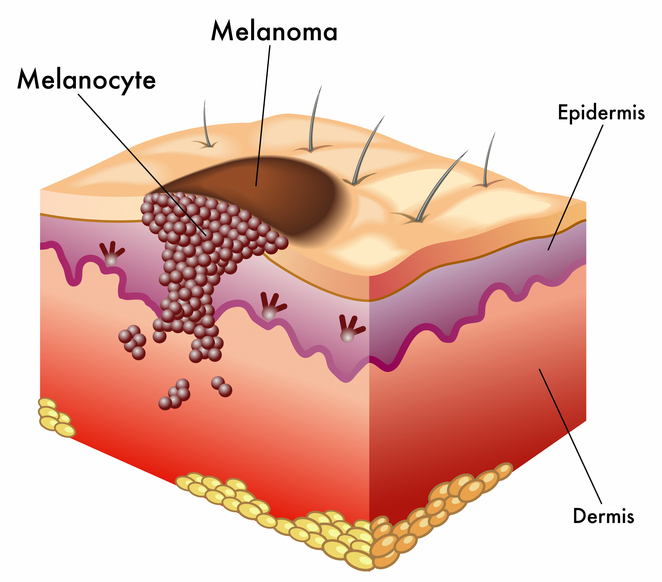 Keep in mind the "A-B-C-D-E" of moles on your skin: Asymmetry, Border, Color, Diameter, and Evolution. See lead story for details.

People with fair complexions, red hair, blue eyes, and freckles typically are considered to be at greater risk of skin cancer than their darker-skinned counterparts. Research has shown that melanomas and other skin cancers occur more commonly in Caucasians than in other racial groups. However, a new study suggests that African-Americans and other people of color not only aren’t immune to developing melanomas, but they also may be more likely to die from them.

“Everyone is at risk for skin cancer, regardless of race,” Jeremy S. Bordeaux, MD, one of the study’s authors, said in a statement. “Patients with skin of color may believe they aren’t at risk, but that is not the case—and when they do get skin cancer, it may be especially deadly.”

The study findings only reinforce the importance of staying on the lookout for melanomas and protecting your skin from the sun’s harmful ultraviolet (UV) rays, regardless of your skin color. (Visit the United States Environmental Protection Agency’s website to view the “UV Index” in your area; it assigns a score to the danger posed by ultraviolet rays in your town.)

Melanomas are the most lethal type of skin cancer, albeit the least common form. The cancer affects the skin’s pigment cells, or melanocytes, and from there it can spread to the lungs and other organs. Once the cancer spreads, it can be deadly.

People with darker complexions produce more of the pigment melanin, which protects the skin. Consequently, people of color often have the misconception that they’re not at risk of skin cancer, according to the Skin Cancer Foundation.

Nevertheless, people of color can still suffer sunburns and develop skin cancer resulting from exposure to the sun’s UV radiation. In fact, dark-skinned people are at increased risk of acral lentiginous melanomas, which can develop on the palms of the hands and the soles of the feet. (This type of skin cancer claimed the life of Jamaican reggae music legend Bob Marley.)

PREVENTING MELANOMAS: DO YOUR PART

Whether you’re fair-skinned or dark-complexioned, take these five steps to prevent melanomas from developing:

1. Wear sunscreen with a sun protection factor (SPF) of 40 to 50. Apply sunscreen a half-hour before you go outdoors, and reapply it every two hours that you’re outside, or more frequently if you’re in the water. If your hair is thinning, use a sunscreen spray or liquid to protect your scalp.
2. As much as possible, wear long-sleeved shirts and pants while working or playing outdoors. Wear a wide-brimmed hat that covers your face, ears, and the back of your neck. Look for sun-protective clothing that provides an SPF of 15 to 100.
3. Avoid outdoor activities between 11 a.m. and 3 p.m., when the sun’s UV radiation is at its greatest.
4. Wear sunglasses with a UV coating, and make sure the label states that they block 99 to 100 percent of UV rays.
5. Stay away from tanning beds and sunlamps.

In a study published in the November 2016 issue of the Journal of the American Academy of Dermatology, Dr. Bordeaux and colleagues from Case Western Reserve University, in Cleveland, reviewed data on nearly 97,000 melanoma patients from 1992 to 2009. Two key findings:

The reasons for the disparities are unclear, although Dr. Bordeaux noted that one potential explanation is that patients with skin of color may not believe that irregular spots on their skin pose a threat, so they don’t seek medical attention.

“Because skin cancer can affect anyone, everyone should be proactive about skin cancer prevention and detection,” he said. “Don’t let this potentially deadly disease sneak up on you because you don’t think it can happen to you.”

Be Mindful of Your Moles

Melanomas develop in the clusters of melanocytes we know as moles. Although most skin cancers occur in the sun-exposed areas of the skin, such as the face, arms, and the backs of the neck and hands, they can form on almost any area of the body.

Experts generally recommend performing skin self-exams at least every one to three months to check for skin cancer. Do the exam in a well-lit room. Remove all your clothing, and use a full-length mirror to inspect your skin from head to toe, as well as a hand-held mirror to view difficult-to-see areas. Or, better yet, have your spouse or partner help you examine your skin.

Look for new marks and changes in existing moles, as well as unusual moles that look unlike other moles or skin blemishes. When examining your skin, keep in mind the “ABCDEs” of melanomas:

A: Asymmetry—The shape of one-half of the mole is different from the other.
B: Border—The edges of the mole are usually ragged, blurred, or irregular, and the pigment may spread into the surrounding skin.
C: Color—The mole is unevenly colored; it could be shades of black, brown, tan, white, gray, red, or blue.
D: Diameter—The mole or other skin mark is larger than a quarter-inch, or about the diameter of a pencil eraser. (Note that some melanomas may be smaller.)
E: Evolution—The mole or lesion is evolving—changing in size, shape, or color.

“Skin cancer is most treatable when detected early, so everyone should regularly examine their skin for new or suspicious spots,” Dr. Bordeaux said. “If you notice any spots that are different from the others, or anything changing, itching, or bleeding on your skin, make an appointment to see a board-certified dermatologist.”